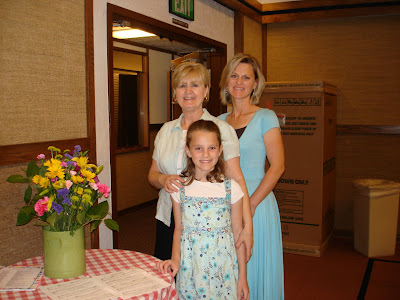 Chukar success aside, it’s been a rough week

#1: Rachael, my mother, and I had our Spring Piano Recital on Saturday. Rache and Mom played beautifully, but as for me, can you spell s-l-a-u-g-h-t-e-r? I do this every time. No matter how much I practice or how well I know a piece, I cannot play in front of an audience. This time, not only did my hands shake, but my right leg started shaking as I worked the pedal. Of course, the audience was to my right, so they could easily view my shakiness, which made me shake more. My stage fright used to really upset me, but this time I just took it in stride: slaughtered my piece as expected, enjoyed the rest of the recital, then sampled the refreshment table afterwards. So although I’m still making a fool of myself at recitals, I just don’t care too much anymore. Now that’s progress. (If you look closely at this photo, which was taken just before my song, you can see that I’m smiling to keep from crying. But aren’t Rachael and my mom adorable?)

#2: I’m fighting another spring cold (don’t even get me started on the one I had in March)

#3: I gained a pound, probably from gorging on Chukar Cherries (that’s a whole other post), but let’s just use the ‘ole female/retention/cyclical standby.

#4: This fall I have to choose between Obama and McCain. Ugh. 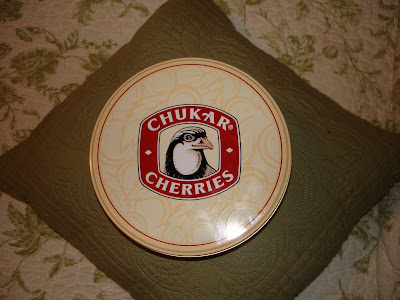 The highlight of my week was managing to swipe an entire case of Chukar Cherries using my trusty five-finger discount. Have any of you out there experienced Chukar Cherries? They are, in a word, the bomb. (How cool do I sound saying that?) They are an overpriced little treasure of our underappreciated little region, and I don’t buy them too often. You can imagine my delight, then, upon seeing the bountiful open tins set as a centerpiece on each table at Derrick’s Psuedo-Fancy Business Thingy.

My dinner companions and I munched happily on the tasty morsels before, during and after our meal, commenting on their tasty morselness and how it was a shame they were so pricey. I mentioned how, although we’d given them as gifts, we always failed to buy any for ourselves. The lovely lady on my left (who is now my new best friend), said “Don’t worry, I won’t tell anybody if you stuff some in your purse on the way out.” HA HA! I laughed, a little too loudly.

Later, when I came huffing and puffing back into the ballroom after the Cricket Episode (please see previous post), everyone was leaving and I decided to grab one more Chukar for the road. My New Best Friend picked up the tin (which was still pretty full, to my surprise) and forced them on me–forced them, I tell you!–saying, “Here, just take them. What are they going to do with all these? You know they’ll just throw them out.” I hemmed and hawed for almost three seconds, then swiped them and ran. Derrick and I gorged the entire way home–cricket in one hand, Chukars in the other–and I’m happy to report that no caloric label could be found anywhere on the tin. I assauged my guilt by making him take the rest of them to work the next morning. I’m sure his fifteen employees enjoyed the four cherries we had left over. 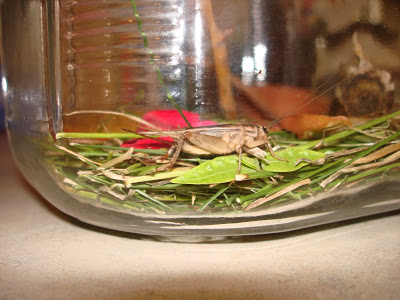 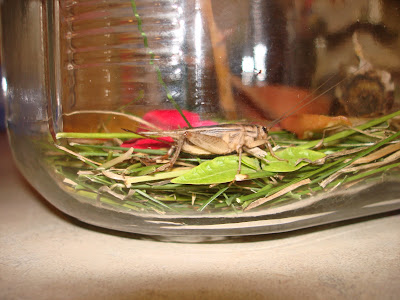 At 9:00 this evening I found myself, in a dress and heels, standing at the counter of Petco ordering One Large Cricket. The boy cashier eyed me skeptically.

“Just one?”< />
“Just one.”< />
“Large or small?”< />
“Large. How much are they?”< />
“Ten cents.”< />
“I’ll take it.”
The cashier then calmly stated into the loudspeaker, “One large cricket, please. One large cricket.” The request echoed throughout the store, reminding me so much of a burger joint, I wondered if you could order by number (Value Meal #1: One large cricket, two small worms and a Coke…) I was impressed when one minute later, a tiny woman emerged from the back of the store through the crowd, delivering the product to me with a big smile. Efficient, that Petco.

As my order was placed over the intercom, laughter erupted in the line. I didn’t see what was so funny, until later Derrick explained to me that they sell crickets in bulk for reptiles to eat, so a customer purchasing just one was a bit of a spectacle. Somehow this did not occur to me at the time of purchase. I just assumed Petco sold crickets for one purpose only: every nine-year old girl needed her own cricket named Lucky to take in a jar to school for Insect Day. Why else would they keep thousands of crickets in stock?

The upside of tonight’s rather embarrassing display was that it gave me a brief respite from a psuedo-fancy dinner at the Red Lion that was agony. It was one of Derrick’s business thingys complete with a two hour program and slide show–need I say more? You’ve all been to them. At 8:35 I remembered the promised cricket would only be available until 9:00 (when Petco closes) so I had to jump up and run out on the show. I made it to the car and peeled out before the evil speaker could drag me back in with his long cane. Thank you, Lucky!