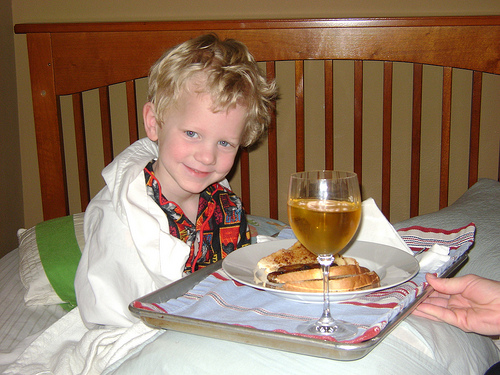 While walking through the screaming, steaming, teeming, germ-infested labryinth that is Chuck E. Cheeses, little Ethan squeezed my hand and whispered in astonishment, “I can’t believe I’m five!”  He said this with the same reverent awe that a young bride might say on the morning of her wedding–I can’t believe I’m getting married!–his voice full of wonder and hope.

I can’t believe it, either.  How could five years have passed since I brought our pink-and-white baby home from the hospital?  How can we already be done with bottles, diapers, potty-training, and tantrums?  (Okay, three out of four’s not bad.)  How can my youngest, the baby, already be telling jokes, drawing masterpieces, taking showers, asking if he can drive, and be in full-time Jedi training?  How can his funny, spunky personality already have seen five Christmases and Easters?

And who taught him, in those five years, to hold the door open for his mom every single time she walks through it?  Not me.  Who taught him that you say goodbye and goodnight with a crisp kiss on each cheek, ala the French?  Still not me.  (Our family usually hugs.) And who taught him that, even at his advanced age of five, mom and dad’s bed is still the comfiest place to get a good night’s sleep? Definitely not me.  Mostly, I want to know who taught him that a lollipop is a good way to top off his breakfast, any and every day of the week?  (It was me, okay?  It was most definitely me.)

I want someone to explain to me where the time went.  I’ve been so busy, I hadn’t noticed my children were growing up.  The only thing worse than having your oldest face middle school is having your baby officially out of toddlerhood and into the straight “little kid” category.  I’ve long since graduated from Young Motherhood, but this birthday eliminates me from the Mother-of-Young-Children category as well.  I’m toast.  (Cue Sunrise, Sunset please.)

In spite of Ethan’s treacherous act of getting older, we had a very happy birthday.  Just once in their young lifespan, I allow each of my children a birthday party at Chuck E. Cheeses. (Megan rejected this offer.)  (She is completely terrified of Chuck E.)  (Smart girl.)  So it happened that Year Five was when Ethan’s robust boyhood dreams would come true.

We kicked off the big day with the traditional birthday breakfast in bed.
(He likes a glass of bubbly to get him going in the morning.) As you may have guessed, we followed up this meal with a much-needed haircut.
(Why can’t we pull off the long-retro-curls thing with E’s gorgeous locks?  It just doesn’t work.)
Hours of anguished waiting later, it was finally time to meet Chuck E.
He did not disappoint. Sorry about cutting off your head in this photo, Chuck E.
But at least I didn’t do it for real.
Which is what I really wanted to do. The kids were invited to dance with the creepy oversized mouse Chuck E.,
but Ethan had other plans. Isn’t this a sweet picture of the birthday boy and an adorable little girl
helping him blow out the candles?
At least, we assumed she was adorable.
We didn’t know her.
At all.
She just wandered over and helped herself to our cupcakes. By the end of the night, three other anonymous girls had followed suit.  We didn’t mind.
Their parents are the ones who had to worry about stranger danger.
No skin off our frosting. A young stud who knows he looks tough in the
world’s coolest crown.
(Which apparently doubles as a flotation device.)
You cannot imagine the sweaty head that lurked beneath that latex. A good-lookin’ (okay, tired and greasy) crew.
Notice Chuck E.’s frazzled gaze in the background, still
reeling from Megan’s rejection.
All kidding aside, we actually had a great time at the “restaurant,” and the pizza is really not that bad (concedes the hostess, three slices later.)  The kids played, danced, ate, and spent tokens like high rollers in Vegas drunk off orange Crush.  It was such a hoppin’ party, in fact, that we all stayed an hour longer than we’d planned–and on a school night!  (No one accuses me of not being a fun mom.)  The highlight of the evening, however, awaited Mr. E. when we arrived home: This gift from Mom and Dad went over like an inflatable red crown embedded
with gold tokens:  beautifully!  And he’s a pretty impressive shooter, too.

Impressive–and adored–in so many ways.
Let the years keep on coming.
We’re loving every minute of it.