Last week I was in line at the grocery store, minding my biz as I leaned over the conveyor belt to pile a big bag of broccoli atop a big bag of Captain Crunch (aka:  Berry Colossal Crunch–we’re broke, okay?)  So engrossing was this task that I failed to notice the woman standing in line a few feet behind me until she cheerily called out, “So, are you a coach?”  I looked up; was she talking to me?  Never in my life have I been accused of being a coach.  (I kind of liked it.)  I then looked down and remembered that I was still in my sweatpants and tennies, having just finished my morning run.  What I really looked like was a retired P.E. teacher, but the title of “coach” was so much more appealing that I decided this woman was my friend.

“Actually, I’m not a coach, I just finished exercising,” I answered, smiling hard to mask the pain of not being a Real Coach.

“Oh…good for you!  You look very…healthy.”  Did she just say healthy?  Everyone knows that’s code for chubs.  Cows and fat babies are healthy.  But I decided not to dwell.

“Thanks,”  I said, demonstrating my magnanimity.  She held my gaze, smiling expectantly.  Obviously a return compliment was in order, so I ponied up.  “And um, you look very…healthy, too.”

“Really?  You think?”  Her eyes lit up and I could see she wanted more.  Noting her dimply, generous frame in a less-than-generous (tight and tiny) sundress, I felt a bit sheepish; my breezy small talk had evidently borne weight.   She smiled and waited.

“Um, yeah…totally!  You look like…you’ve been outside a lot, enjoying your summer.”  She did have a tan beneath the myriad of tattoos that stretched across her aging shoulders.  Gray frizzy hair framed the wrinkled, make-up less face that now broke into a wide grin.  I liked this woman.  She seemed like the Harley-Davidson grandma that everyone wishes they had.

“Thanks!” she replied, “I’ve playing outside a lot with my grandkids–”

“Oh, you have grandkids?  You look so young.”

My faithfuls, I must pause here and confess that this was a shameful, bald-faced, ninth-commandment breaking lie.  She did not look all that young.  She looked, in fact, like a grandmother–albeit a Harley Davidson one, which is nothing to hang your head about.  Of course nothing is wrong with looking like a grandmother if you are a grandmother, except that no grandmother wants to look like one.  No woman–of any age, era or disposition–wants to be told she looks like a grandmother or  a Weight Watchers counselor, noble and necessary as both positions are.  But ever the people pleaser, the words tumbled from my mouth unfiltered by a fact check.  And now this grandmother’s wrinkled and friendly face was beaming.

Oh no.  She’d popped The Question.

“Um…what?”  I glanced up at the clerk, still waiting on the customer before me.  What was taking her so long?  My New Best Friend grabbed my arm in a friendly, albeit firm, Harley-Davidson like grasp.

“Guess my age, honey.  Go on, guess.  Tell me how old you think I am.”   If her smile was wide before, it was mammoth now.  Mammoth and hopeful.

“You know, that’s okay–I’ve always been terrible at guessing people’s ages.”  This much was true.  If you are my best friend and your child is three or thirteen, I’ll guess nine.  (I’ve done this before and I’ve lost best friends over it.)  My New Best Friend, however, wasn’t backing down.

Trapped between this pleading woman and that snail of a clerk, I soon understood what the situation would require.  See, when a woman–any woman–over the age of eighteen asks you to guess her age, you can only do one of two things:

2)  Guess how old she really is and shave at least ten years off.  Then assume that you guessed too high the first time and shave another  five to seven years off your second answer.  You cannot be too liberal in your shaving here.  Do not, regardless of pressure or circumstance, attempt to determine her real age.  I don’t care if you’re honest, earnest, a saint, a nun, or a sweatpant-clad mom confronted by a stranger:  YOU MUST LIE.  Always, always, and again always: lie.  And until you’ve come to terms with lying, you must not answer the question.

And thus our conversation concluded:

Me:  Smile-squinting hopefully to seem invested in my guess “Oh, I don’t know….late forties maybe?” (This was shameless.)

Her:  giggle and vigorous head-shake “No!”

Me:  fake incredulous stare “You’re kidding!  Sixty-four?  I would have never guessed!”

Her:  Administers friendly, albeit firm, Harley-Davidson-like hug  “You just made my week!”  Rocks back and forth in hug.

At this point my groceries were scanned and bagged, so I paid the clerk, waved a quick “bye bye!” and beelined for the door before committing more atrocities.  I pulled out of the parking lot and told myself that despite my blatant dishonesty, no real harm had been done.  She was happy, I was happy, and thanks to my diabolical prowess she was now sixty-three going on forty-nine.  Let her live in the little bubble I’d blown.  It was nice there.

No.  You wouldn’t.  You would just let me live in the little bubble I’ve blown, and then you’d tell me that my bubble looked smooth, and firm, and young.

And I’d believe you.  I mean, you’re my friend.  Why would you lie? 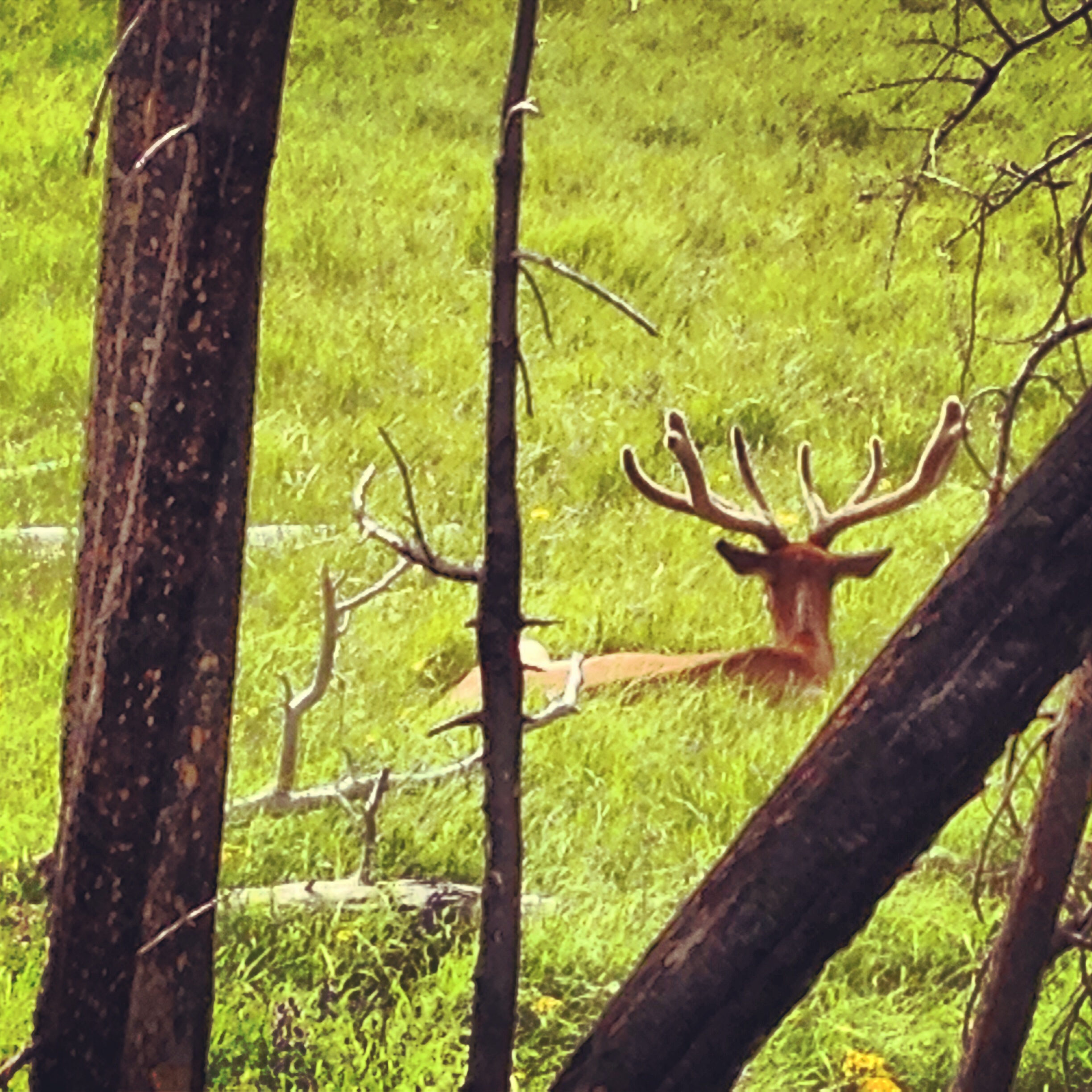 My last week as a thirtysomething took place in Yellowstone National Park.  I’d never been before, and spent each day staring out the car window in awe, squealing “this is so beautiful!” over–andoverandover–again.  (My poor family.  They were trapped in the car with no exit strategy.)  But really, it was breathtaking:  the mountains, the waterfalls, the open fields, the endless trees, the wildlife.  Oh, the wildlife.  This little guy was my favorite. 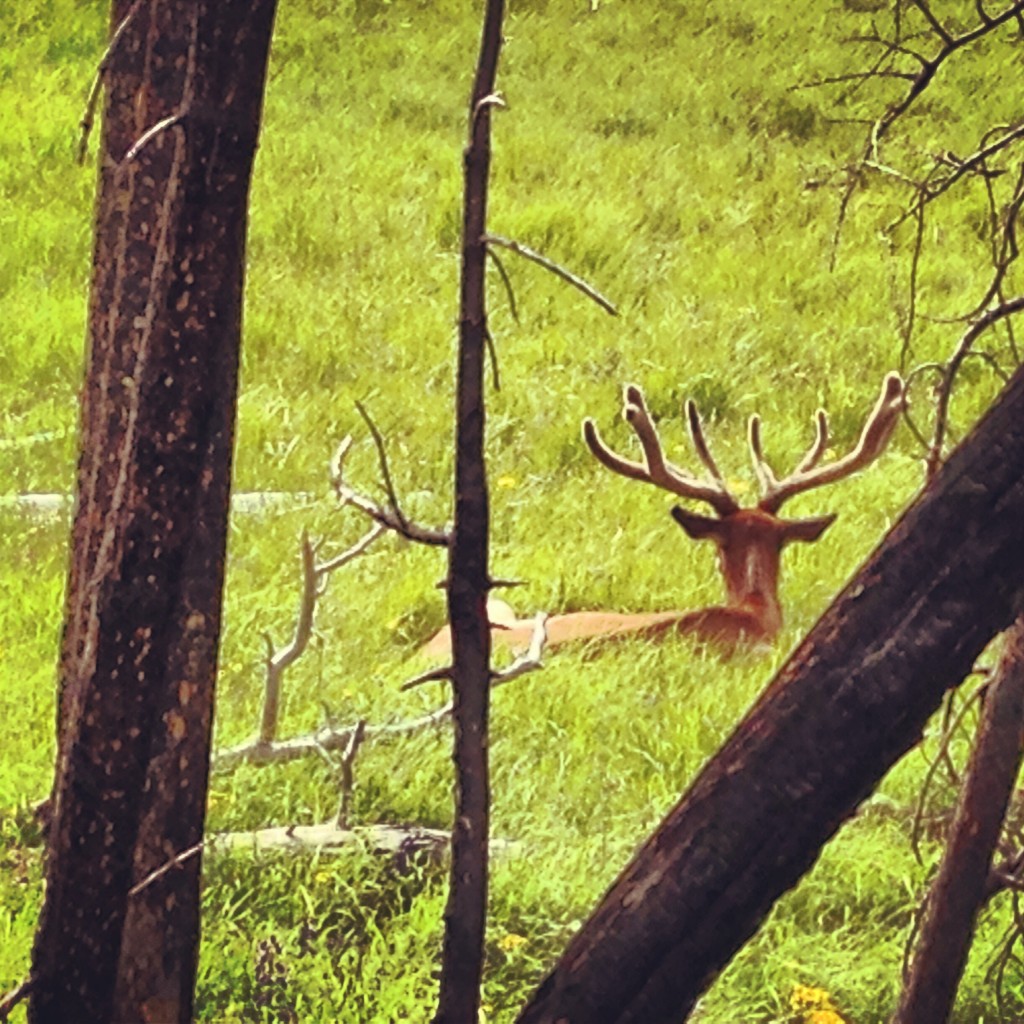 I think he turned his back on me because he knew I was turning forty.  Men.

And then there were the geysers and hot springs, which showed an entirely different side of nature.  Just look at that; it’s like three isolated terrains crashed into each other to make the most beautiful and interesting scene imaginable.  I couldn’t get enough of it.  Such beauty, such diversity, such peace–all at once.  Taking in that view, I felt contentment wash over me with the warmth of the Wyoming sun.  I was just so happy to be here, on this day and in this place and with those I love most.  It didn’t matter if I was forty or fourteen; the point was, I got to come!  By some stroke of luck I’d arrived at this place in particular and this life in general and I just couldn’t believe my good fortune.  And somehow, just then, getting older started to make sense to me.  Because I was finally able to put into words what I’ve been feeling for some time:  my life is becoming less about Me and more about What’s Around Me.  And it is awesome. 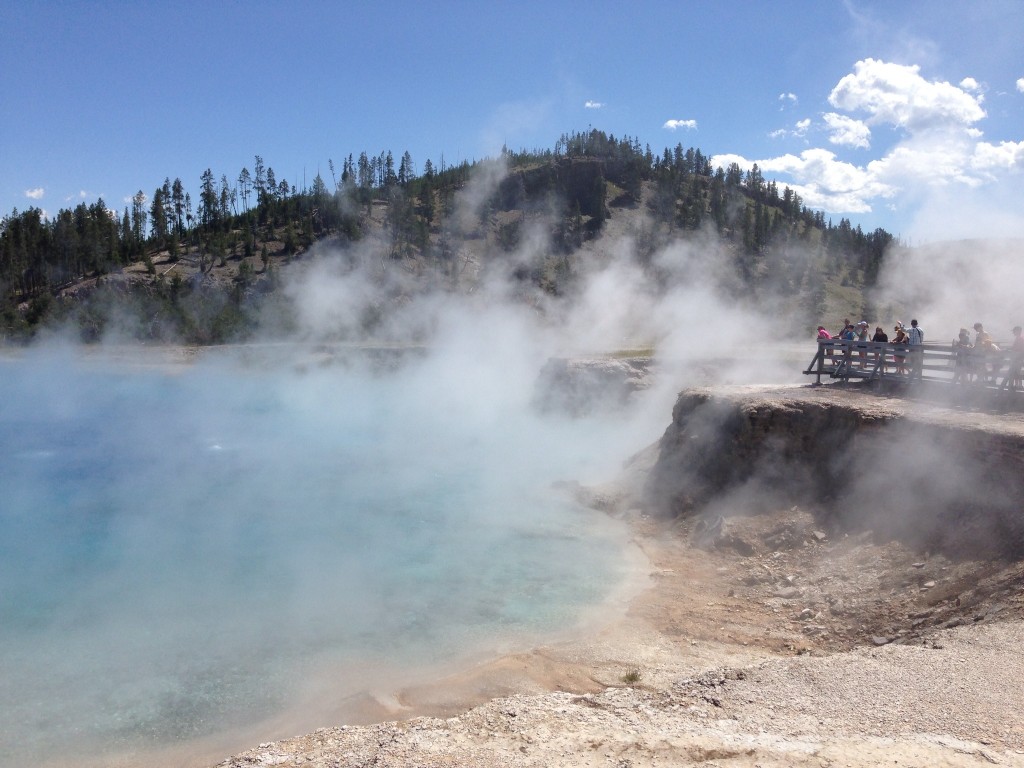 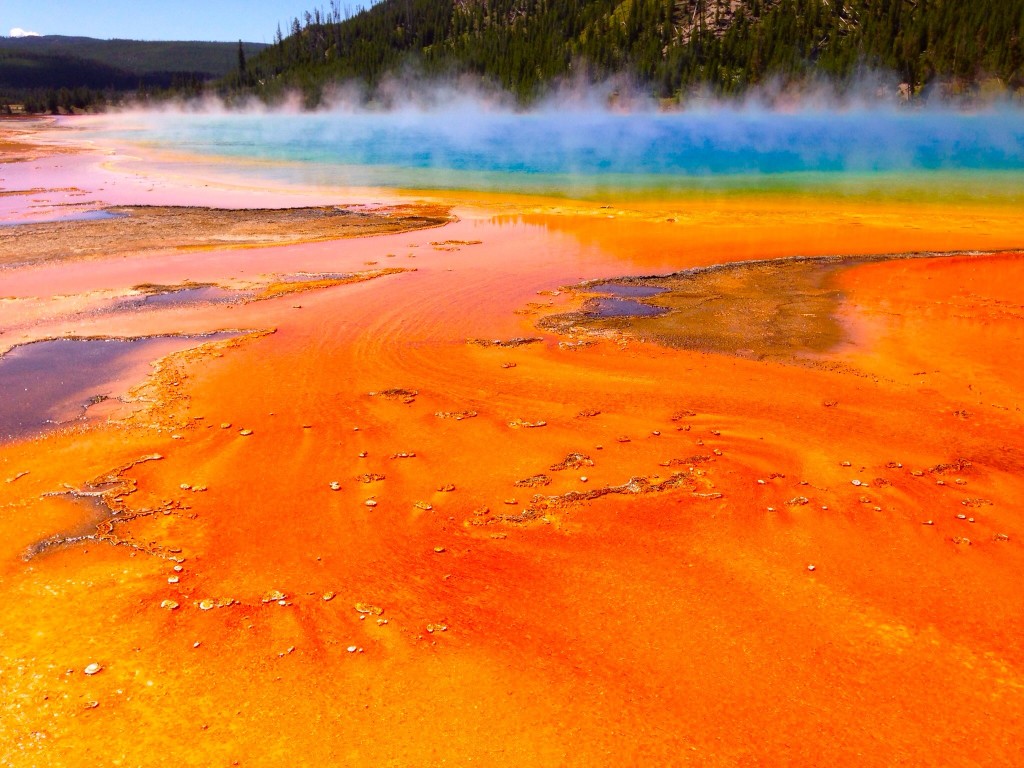 They say the sky’s bigger in Montana, and my faithfuls, it is.  (No really–it is.  Don’t ask me how this works.)  See, I’ve spent my life thinking that the sky hung at the same height everywhere, but last week I learned that I’ve had the sky all wrong.  Seen from a new perspective, I witnessed an expanse of horizon that made yesterday’s sky look like a postcard.  This new sky of mine is mammoth and magnificent; a ceiling for the ages. 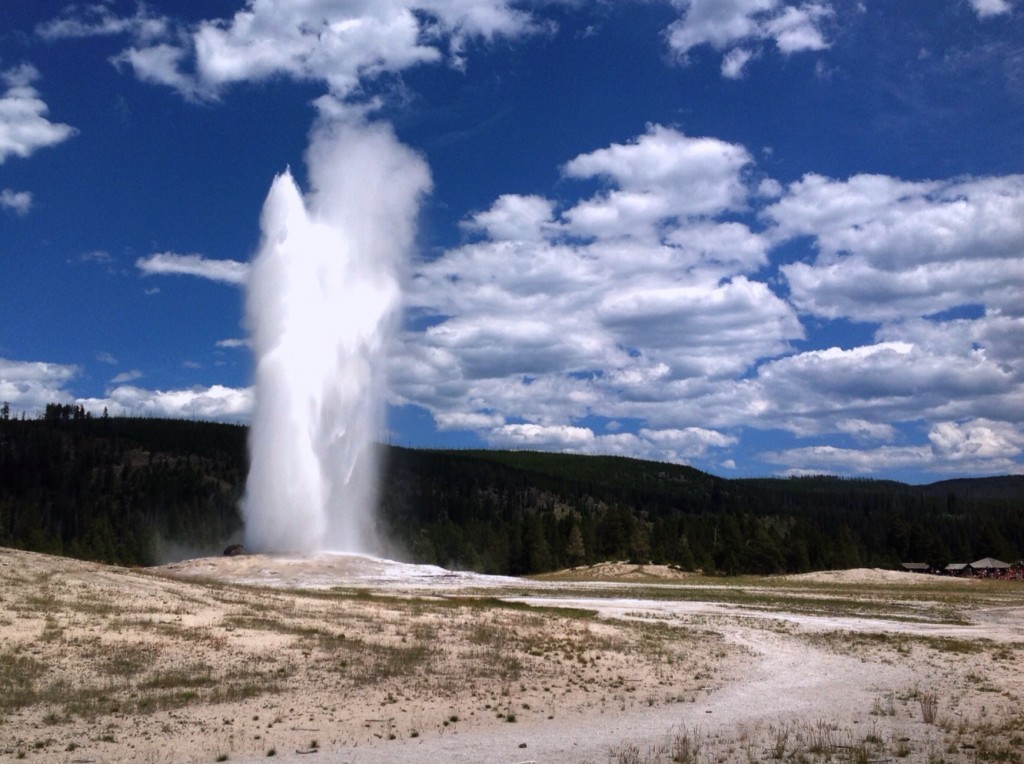 And so it is with getting older.  For years now and while I wasn’t looking, that narrow sky of my youth–blue and pretty as it was–has quietly spread into a vastness of purples and pinks and golds.  It has evolved from pretty to spectacular.  I am old enough to have experienced things and young enough to experience many more, and so satisfaction and anticipation greet me at this age, hand-in-hand.  I can feel my motivations shifting from what I can accomplish to what I can contribute, and I find myself worrying less about what others think and more about how others feel.  And despite what you’ve heard, I can say with authority that that delicious sense of possibility–remember it from your teens?–still exists in adulthood.  It just turns inside out.  I don’t wonder so much about what possibilities lay in wait for me; I wonder about what possibilities lie within me.  That mantra of the young adult–“What can I do?”–becomes, for a (real) adult, “What can I be?”  And I’m realizing–a little late, probably–that nobody, not a single person on the planet, is responsible for what I can become except me.  It’s comforting.  It’s terrifying.  It’s fascinating.  It’s forty.

And I’m just so happy to be here.