I read once, in a Jane Austen book, that “November must be the most disagreeable month of the year!”  With all due respect to the LDS Mother’s Authoress of Choice, I must dissent:  it is March.  I do not like the month of March.  Never have.  In my neck of the woods, March is cold and windy and should feel like spring but only ever feels like a chilly washed-up winter.  Blech.  No March Madness for me.

So this year, to cure the March blues, our family did something uncharacteristically fabulous.  Yes, my faithfuls, we finally got over ourselves and took the mandatory pilgrimage to..where?  Xanadu? Babylon?  Sin City?  Close… 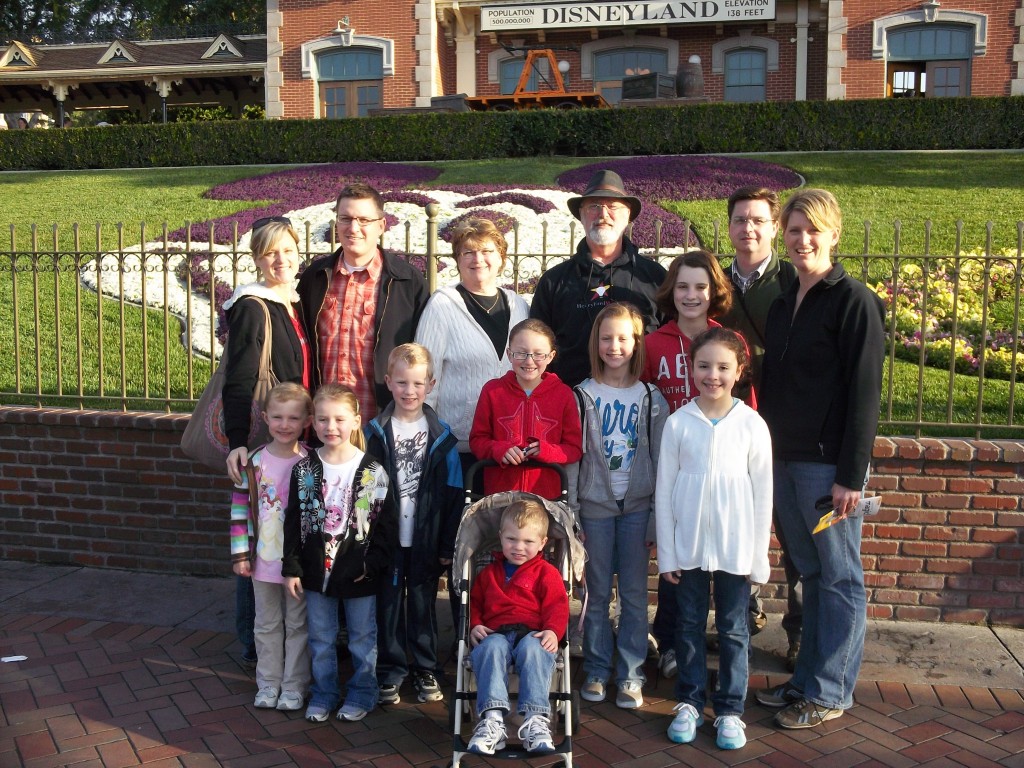 Left to right: Me, the Hub, the Hub’s parents Neal and Laura, brother-in-law Morgan (nicest guy ever), sister-in-law Melissa (most organized/generous person ever.)  Below us are a whole bunch of kids who’s names I can’t really remember, but you get the point.

Forgive this close-eyed, sun-in-face, pasty-end-of-winter photo.  I’m sorry to tell you that this is about the best one I could find.  It is a testament to the trust I have in my three faithfuls that I share this photo with you now.  (And just think:  this was taken on the first morning, before the three-day churro orgey.  Can you imagine how bloated my face was by Day Three?  I won’t subject you to that digital image.*)

Bad picture aside, this trip was truly awesome.  Totally, magically, corn-ily, excessively awesome.  Supersized western culture at its most supersized, and we loved every minute of it.  I don’t care how sophisticated you think you are, Disneyland with your kids is awesome.  Especially when you’re enjoying it with relatives you never get to see because they moved to Ohio ten years ago and promised they’d move back and then never did because they have good jobs there and love the area and apparently that’s more important than living in Kennewick next to me so they can watch my kids while I go to the gym.  But I digress.

So basically we trooped around Disneyland for three days with a party of fourteen (yes, fourteen) in tow.  Sounds miserable, right?  Nope–it was awesome.  The kids were hyper and funny and very non-whiny considering we kept them at the park for a sadistic fourteen hours on the last day.  (“You are having fun!  You are having fun!”)  We managed to stay together enough to visit, but then split up enough to do what we each wanted.  I must have ridden Thunder Mountain Railroad at least five times with Rachael.  We got stuck in a 45-minute line one night, and she said she was sorry for dragging me again, and she hoped I didn’t mind waiting, but she was having fun just hanging out in line and talking with me.  Did I mind?  It was awesome.

The best part of this trip?  Vacation Derrick came back out to play!  He was the first one up every morning, dragging us all out of bed to get to the park as soon as it opened.  He took us to Rainforest Cafe and didn’t balk at the bill.  (I did.)  He took Ethan on Star Tours and Space Mountain and Indiana Jones over and over again, stopping only to purchase more lemonade and Mickey-shaped pretzels for his only son.  Come to think of it, we had over $150 in Disneyland gift cards, and I’m pretty sure we spent it all on ice cream and soda.  (You think I’m kidding?  A Disney Diet Coke is $3.25.  I was there for three days.  You do the math.)

Like I said, my sister-in-law has supernatural planning skills, and she found this fantabulous house, about six blocks from the park, that we all rented together.  Sunny and roomy with a big kitchen, pool and hot tub out back.  Easy and fun and awesome.  Oh, and did I mention the weather was totally awesome?  After our dizzying week of walking, we spent a full day doing nothing but sitting by the pool, soaking up the sun, and eating grandma’s chocolate chip cookies.  It was awesome.

The Magic Kingdom is loud and crowded and ridiculously expensive, but after this trip I’ve decided it’s the biggest waste of money that’s worth every penny.  The memories will be awesome.  And coming home to warm weather and yet another week off school for Spring Break?  Even awesomer.  And so it has been decided:  with an unprecedented triumph, March 2012 has officially ended up awesome. 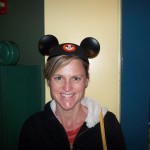 *I lied.  I will now subject you to the digital image which had frightened you so.  Me, Day Four, after the three-day churro orgey.  Mouse ears.  No makeup.  Freakishly long chin, as always.  Awesome.

5 thoughts on “For once, March ended up awesome.”