What’s with teens and sleep?  My gosh.

At our house, it’s becoming something of a medical concern.  My 18 year-old daughter can sleep all night, all day, during school, after school, during dinner, and in the car.  (When I’m driving, not her. Although at this point who knows.)

My 14 year-old son is no better.  Once upon a time he was our little guy who ran out of his room at seven o’clock on a Saturday morning, eager to start his day of play.  But on the eve of his thirteenth birthday—at the stroke of midnight, I could swear it—all natural morning vigor was lost and the following day he slept until noon.  We thought he was dead. Then, to our disappointment, we realized he was just becoming a teenager. 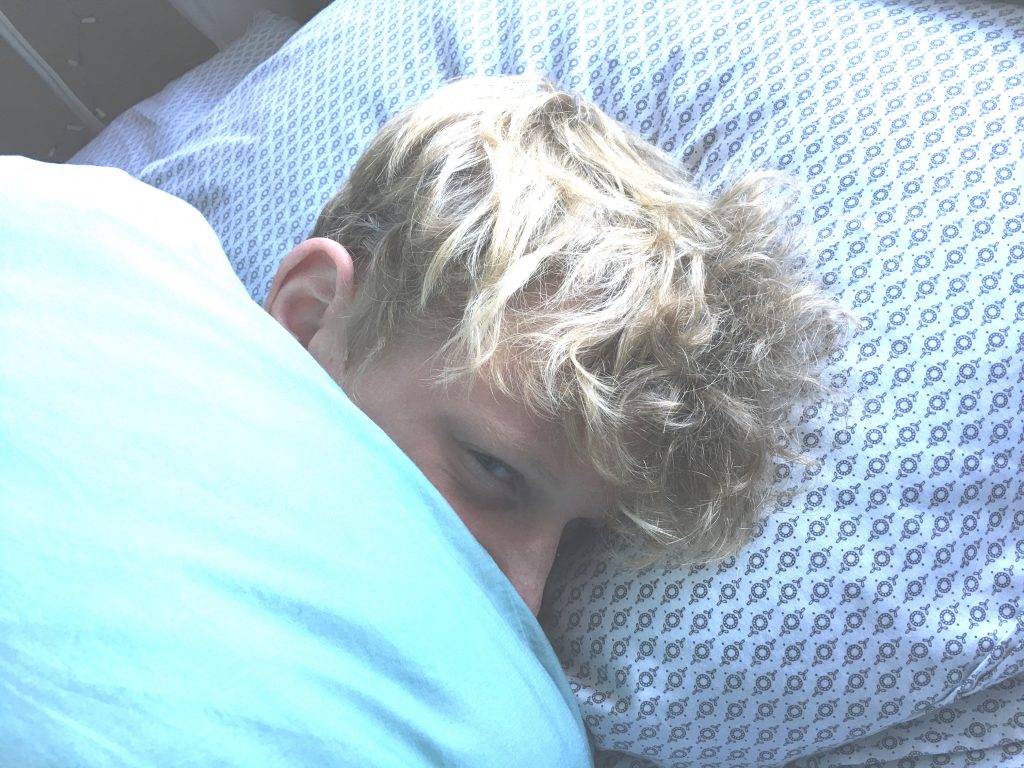 Summer has brought it to a whole new level.  What used to be Saturday Sleeping has now become Every Day Sleeping, and I’m not afraid to tell you that something might be wrong with my children.

Look, I get it.  Their bodies are growing, their hormones are raging, and their prefrontal cortex functions like that of a toddler’s while their appetite skyrockets to that of a caveman’s.  (Forget the Neanderthal Man, why aren’t we studying the American Teen in biology?  Their developmental patterns are as mysterious and research subjects more abundant.)  These people are subhuman, I’m telling you.

And because they are subhuman, I’m willing to allow that they need sleep that exceeds the normal human range.  Instead of eight hours per night, the teenager needs ten. Twelve even. Okay, fine. It’s sweaty and smelly and obnoxious, but I’ll give it ‘em.

But here’s where I get confused:  how is that after sleeping, let’s say, from midnight to noon—a full twelve hours—they heave out of bed like the walking dead, flop into the shower, drag themselves to two hours (two hours—the injustice!) of church, then deem it necessary to come home and take a four hour nap.  Friends and fellow parents, I do not understand this.

A day boasts 24 hours.  If sixteen of those hours are spent sleeping, the American Teen/Neanderthal (Teenanderthal?) is left with eight hours in which to live their life.  Subtract four of those hours for eating, another two for makeup-ing (girls), flexing in front of the mirror (boys), trying on nine different outfits and examining their nose for whiteheads and you’re down to two skimpy hours remaining.  These are quickly swallowed up by Insta and Snapchat, leaving our beloved teenager exactly zero hours in the day for developing said prefrontal cortex—you know, that part of the brain that determines little things like personality development, decision making, and moderating social behavior.  I think you know where I’m going with this.

So here’s my question:  why are we letting these cortex-less people drive at age sixteen and vote at age eighteen?  Instead of requiring proof of age for these privileges, I move that law requires proof of a fully developed prefrontal cortex.  Before a driver’s license or voter registration card is issued, a signed medical release and high-resolution scan of the Developed Cortex must be submitted.  The upside? You and I could sit back and watch our youth denied driving and voting. The downside? We’d have to keep chauffeuring their sorry non-cortexes around town and the Democrats would never win another election. It would come at a cost, but it might be worth it.  I’m just saying.

It’s not that my kids are bad people.  It’s not that I don’t like them. It’s not that their rooms smell like a garbage dump when I walk in at the premature hour of eleven o’clock in the morning to timidly nudge them and softly—oh so softly—whisper, “Honey?  I think it’s time you started waking up…” only to have them slump violently away from me, shove the covers over their head, and wail to the ceiling with the anger of the gods.

Like gods, they are fierce and terrible.  And like any mortal, I fear for my life before them.  And so I step away from the bed in silence and tiptoe backwards out of the room, hoping they’ll stay asleep long enough to forget I dared entry into their domain.  Twelve o’clock…one o’clock…two o’clock…dream away, my darlings, dream away.  Please just don’t kill me.