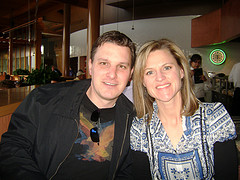 The only thing more fun than watching a good movie with your friends is watching a bad one. So it happened this blustery March weekend when our good friends, the Shorts, came for a visit. Before I launch into my critical tirade, I must convey the level of fun we always have with the Short family. They are fun, funny, intelligent, witty, easygoing, gracious, generous…and that only sums up their personalities. Of course they are gorgeous and glamorous as well (they’re friends of ours, for Pete’s sake.) Somehow we couldn’t manage to get a picture of the four
of us together. But at least I’m posting these. Baby steps.

We wanted to break down some of the misconceptions our West coast friends may have had about Kennewick being a small, crusty town, so we decided to show them some of the classier hot spots: the bowling alley, the Rollerena and, of course, Costco. boring use of handlebars fun use of handlebars how cute is this family?

Believe it or not, we had a blast at all three places, and Rachel scored a cute pair of jeans at Costco, which she claimed was the first article of clothing she’d ever purchased there. (Was she kidding? My closet is full of Costco and Target staples. Am I the only woman who buys her clothes at the same stores she can get produce and toilet paper? I thought this was normal.) But I digress. Nothing so flattering as the floodlights at Celebrity Bowl.

After appeasing our children with the aforementioned activities, we did manage a little adult fun. We hired two sitters, hooked them up with pizza, and then made our way to Anthony’s for dinner (on the river; pretty; yum). Jason wowed us all by entering the famed “Oyster Slurp” contest which was being held in the foyer of the restaurant. Yes, four grown men stood around a table that was graced with large platters of raw oysters, and at the signal, slurped them up as fast as they could. We were expecting great things from Jason, who was the only true northwesterner at the table, in addition to being at least 25 years younger than all of the other contenders. Talk about a smug grin.
(He thought he was pretty hot stuff with those oysters.)

Alas, it was not to be: our poor Jason came in dead last, finishing only half his platter of oysters as the victor slurped his own up at an unbelievable rate. Oh, the agony of defeat. Remember, Jason, that you are a successful attorney and champion golfer.
We all have our talents.

After a scrumptious dinner at Anthony’s, we were perfectly positioned for a bit of candy and a great movie. Unfortunately, there was nothing great playing, so we settled on Taken, a Liam Neeson action movie (yes, we ladies were being generous.) This movie was well done and fast paced, BUT….because of the subject matter, I do not recommend it for mothers, fathers, women, or men with any kind of regard for the sanctity of life or the dignity of the human soul. In other words, Derrick and Jason loved it.

After the flick, it was only 9 pm and we had a couple more hours before we needed to get home. The usual Kennewick nightlife–i.e., concerts, gallery openings, jazz clubs–seemed hard to find on this particular Friday night. So what to do? See another movie, of course! And due to some lofty (but highly classified) theater connections, we were able to get into the next one free. So we decided that This One’s For the Girls (a big shout out to Martina), and dragged our hubbys to He’s Just Not That Into You, hoping for a fun, feel good show that would end the evening on a high note. But as with Jason’s ill-fated slurpoff, it was not meant to be.

This movie was not original, funny, or clever. It was: unoriginal, boring, crass, and forgettable. Think of every irritating cliche you’ve ever seen in a romantic comedy, times it by two hours, and you’ve got He’s Just Not That Into You. I’m surprised the critics were as easy on it as they were.

Besides the predictably lazy morals, the worst thing about this movie is its illustration of men and women. Men are made out to be self-centered, immature jerks who seemingly can’t stand women, don’t want to marry women, don’t want to be married to women, and don’t want to be bothered with women, period.(Maybe that’s why half of the characters are gay.) The women fare no better. They are silly, whiny, and naive, with the emotional maturity of fourteen-year old gi
rls. The women who are older and more mature are played as uptight, boring, and lifeless. These female characters put up with or follow around men who, apparently, just don’t like them much at all. I sat there wondering, “Do men really hate women this much?” I was surprised that so many “empowered” female actresses would consent to play roles that made women look so victimized, so ignorant, and so stupid.

(I used a whole lot of adjectives in that last paragraph. Fifteen, to be exact.)

And there you have it. Alot of smart, funny people I know liked this movie, so I may make some enemies from this post, but I dare not consent by my silence.

Having said all that, I can now admit that I’m glad we saw this movie because it spawned a fun game on the car ride home. We will call it something original, like: What’s the Worst Movie You’ve Ever Seen?

Derrick: He’s Just Not That Into You
Jen: The Object of My Affection
Rachel: Circle of Friends
Jason: The Ultimate Gift

So now what I want to know is: What’s the worst movie you’ve ever seen? I can hardly wait to find out. Whatever your answer may be, I hope you at least got to enjoy it with some good friends and Original Reese’s Peanut Butter Cups (not their ugly stepchild, Reese’s Pieces. Really, Jason, what were you thinking??)