Do you remember this song from Mulan? I was reminded of it when my daughter saw my Halloween costume a few weeks ago. About three hours before the big church party I was running like a mad dog through Goodwill, frantically trying to throw a costume together. It didn’t need to be great; I just had to keep my promise to some girlfriends that I’d actually dress up this year. The clock was ticking furiously, and just as I was about to fall back on that fallback of all costumes–the dreaded “’80s girl”– I spotted a long, blue “silk” robe peeking out between a ripped ballerina tutu and a deeply stained graduation gown. In a flash of genius, I thought “I’ll go as a geisha! It will be a real, bona fide Halloween costume, and totally unique.  Perfect!” With a flushed face and fingers trembling in anticipation,  I bought the robe ($2.50–a little steep), stopped at the fabric store for a quick, lime green obi, stopped at the drugstore for white face paint, and finished up at a local Chinese restaurant for some hair-adorning chopsticks. This would be my first Halloween costume in a decade, and I was going to do it right.
One hectic hour later, after getting the kids all done up, I receded to my boudair and went to work. I painted my face white, my lips red, slicked my hair back w/the chopsticks, and even found some white hose. (When was I ever wearing white hose? Please forgive the transgression). A pair of slipper-like shoes finished the look. I stood back and sized myself up in the mirror, and had to admit that for a robust blue-eyed blonde of Danish descent, I looked, well…nothing like a geisha. But I looked like a dorky American mom trying really hard to play a geisha, and I was cool with that. I mean, it was the Edison Ward Trunk or Treat. Expectations of ingenuity weren’t exactly soaring.
So I walked out and showed my girls the finished product. They smiled and asked exactly what I was dressed as. I didn’t have time to explain what a geisha was, so I just said, “Oh, I’m like one of the girls on Mulan.” (Yes, Walt Disney has provided the frame of reference in which I’m raising my children, thank you very much.)
So then Rachael asks, in all seriousness, “Oh, you mean like one of the girls who dishonors her family?” At this point, I was sniffing too much face goo off my upper lip to let this comment bother me,  so I muttered something about eastern beauty and yelled at the kids to get in the car.  As we were pulling out of the driveway, Megan said, “Mom, you don’t look pretty, but you look good.”
We soon arrived at the ward party, which had the biggest turnout in the history of ward parties.  I was happy to have such a vast audience for which to make my glamorous debut.  Derrick would be meeting us there from work, and I couldn’t wait to show him my costume. How proud he would be, married to such a creative and fun woman! He sauntered my way with a smile on his face. In a low voice he said, “I heard my wife was coming as a lady of the night. Cool.”
“What do you mean, lady of the night? Where did you hear that?”
“Oh, I passed by —- and ——- (male friends of ours who shall remain nameless) and they told me you came as a prostitute.”
“What? A geisha’s not a prostitute! Haven’t you read the book? A geisha is a beautiful woman who entertains with tea parties and innocent dancing. She is not a prostitute!” I was not as insulted by this attack on my costume as I was by the bald ignorance standing before me. Everyone knows that geishas are not prostitutes. (Well, not really.) Derrick was unruffled.
“Whatever. I just think it’s pretty sweet that you came to the kids’ Halloween party as an Asian hooker. Great example for our girls.” His lazy smile incensed me.
“I am not a hooker! I’m a geisha–I’m a geisha! A geisha is not a hooker! Haven’t you read the book?” Why I kept asking him if he’d read Memoirs of a Geisha, I do not know. I think I was trying to point out the fact that he had not read it, and therefore had no store of knowledge concerning Asians or their hookers. (I, on the other hand, was surely an expert on far eastern sexual politics, seeing as over a decade ago I read an Oprah bestseller.)
“C’mon, I’m just teasing. I think you look great.”
“Whatever. I am not a hooker.”  I stood against the hallway, arms folded in front of me, my surly pout enhanced by its small, red-lined lips.  Derrick patted me gently on the shoulder.
“I know you’re not a hooker, Jen. I know.” Worse than this shameless condescension was the fact that he never once told me that I looked pretty. I began to wonder: Was Megan right? Was it remotely possible that I did not look attractive with white face paint, bloodred lips, and slicked back hair? An Asian hooker was one thing, but an ugly Asian hooker? That was suicide.
No, I told myself. I’m a geisha, I’m a geisha…I’m a beautiful, elegant woman who entertains through dance and song. I’m a lovely water lily, a delicate rose…
We made our way through the crowded, noisy hall toward dinner in the gym. A (male) friend passe
d by and lowered his voice toward me. “Ooh, a lady of the night, huh? Niiice.” 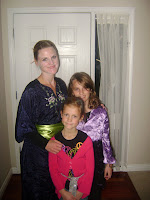 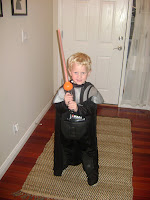 Who knew they made light-up orange light sabers with pumpkin handles? Thank you, Value Village. 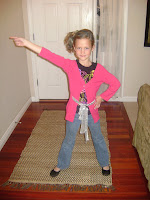 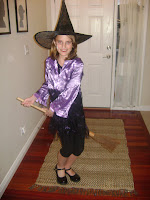 Even as a witch, Rachael understands the need to sidesaddle.
(I must be doing something right.)
So you see, the kids looked darling, I looked trashy (and apparently ugly), and we had a busy, fun, killer Halloween.  Great ward party–Derrick won second place in the chili cookoff and my fishing game was a hit. The kids got tons of loot, and I even sprang for the expensive chocolate candy, which redeemed my sorely under-decorated trunk.  Now it’s on to Thanksgiving in Seaside and Christmas at home.  Love this time of year!

Kenneth on 30 Rock: “I feel as useless as a Mom’s college degree!”

I have never laughed so hard at a television screen. Finally, somebody said it.