I was snuggling with Megan tonight as I tucked her in. I’d brought her a quilt fresh from the dryer and she was giddy. “Ooh, I wish I lived in a dryer!” she squealed. I lied down cheek-to-cheek with her and she started waxing philosophical, as Megan often does.

“Mom, why are there so many things in the world? Like violins, and the sky, and why does the earth have to spin–well, I know why, because everywhere needs at least a little bit of sunlight–but, like, why are beds soft, and why aren’t we animals instead of people? I mean, nobody could know everything there is to know.”

I smiled at her with the tender magnanimity that only a mother on the cusp of a Great Teaching Moment can summon.

“Well, there is one person who knows everything. And do you know who that is?”

“That’s right. And I think that’s why it took Him so long to create the earth, because there is so, so much to know.”

Megan thought about this for a quiet moment, then let out a soft sigh.

“Well, I’m just glad he didn’t make our underwear metal. Or wood. Wood would be terrible.” 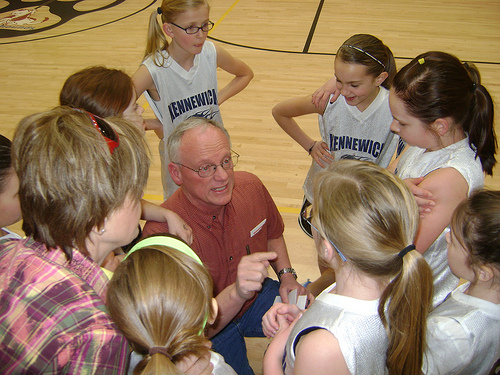 And we’re not talking early acne here.  After two fun but fairly uneventful seasons, Megan began her third year of basketball on fire.  She broke out during the season opener with five baskets, four of them from fast breaks.  Every game thereafter was similar.  She was just unstoppable.  Meg is smart, quick, confident and always relaxed on the court.  I really think she inherited her Uncle Doug’s hooping ability (certainly not mine.)  Once again under the direction of Coach Rod, (aka Grandpa), she was christened with the nickname “The Flash” at the end of the season because she is just lightning-quick out there.  Who says the short Christensen legs are a liability?  The girl’s got skillzzz.

(And I tried to take about a million action shots this season and never got a decent one.  I really need a new camera.) As in life, Cindy pretends to be Rod’s assistant while actually telling him what to do the whole time. Getting ready to play or noticing a bug on the ground.  Not sure which. By the look on Coach’s face, I’m thinking this was the post-defeat obligatory cheer for the other team.

The best part is that Megan always has fun.  Win or lose, take it or leave it, she doesn’t really care.  As long as she gets to hang out with Grandpa and her cousin Bailie, basketball serves its purpose.  Her team lost only one game during the season, and it was against some very tall, aggressive, slightly scary, slightly dirty players.  Even the adults were taken aback, watching from the sidelines.  It was a little demoralizing, but on the drive home Megan shrugged her shoulders and said, “That’s the only game we lost all year.  Those girls were tough.  But, oh well.  They’re not a part of my life anymore.”  She then smiled and asked if we could go to the mall.