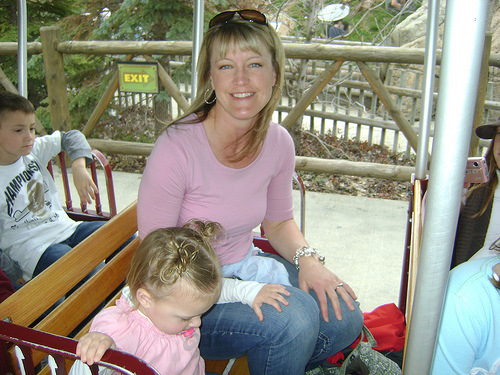 I have a sister named Jaimy.  We have a lot of fun together.  We just spent Spring Break at her lovely home outside Salt Lake City and had all kinds of adventures.  But the most fun we have together happens when Jaimy gets psuedoangry.  This occurs when something is just funny–and just annoying–enough to merit an amused/angry response from said sister.  Personally, I love Jaimy’s psuedoanger.  It takes me back to our young years when she and I lusted ferociously after each other’s blood.  (No joke.  We almost killed each other on quite a few occasions.)  Here are the top ten things that happened last week to provoke Jaimy’s delicious disdain:

1.  My inability to grasp the concept of the “bottom three” in American Idol.  I never watch this show at home, but Jaimy had some back episodes recorded and I quickly got hooked.  We watched it late into the night, and I kept asking her, “Is he going home?  Is she going home?”  “No,” Jaimy would respond, exasperated.  “They’re just in the bottom three.”  “Oh,” I’d reply, then ask the same panicked question again after the next round.  I knew the psuedoanger was rising when she finally muttered through clenched teeth and a sidelong glance, “The show’s been on for ten years.  Figure it out already.”  She wasn’t smiling.

2.  The sixty-second carousel ride at Hogle Zoo.  A buck-fifty a kid, and I don’t think it even lasted that long.  Plus, you could barely hear the background music, which should be the merriest part, don’t you think?  We both mouthed “lame!” to each other over the bobbing horses, but pretended to have fun for the kids’ sake.  I think the kids even knew it was lame and pretended to have fun for our sakes.

3.  A big snowstorm in April.  Actually, I think this anger may have been real, not psuedo.  It dumped off and on the whole week we were there.  April?  Seriously?

4.  Her six-year old son’s antics.  My favorite was when she called him over to our table at Costco for messing around.  As he left the kids’ table, he looked back and said with mighty bravado, “Whoa, looks like I’ve been called to the Principal’s Office!” His young audience roared with laughter at this clever joke.  He then pranced over to us with a smug grin on his face, eager to take the punishment in front of his fans.  Jaimy quote-unquote disciplined him while I laughed outright, prompting even more psuedoanger from his mother.  (I thought his joke was pretty clever, too.  But then again, I barely understand American Idol, so who am I to judge?)

5.  Her disgust with how much we had eaten.  We actually shared this psuedoanger:  “Oh my gosh, I’m sooo full….I’m sooo fat….my jeans are sooo tight….what am I doing to myself?….”  These lamentations were usually followed by a trip to the grocery store to shop for the next day’s elaborate meals and desserts (yes, that’s desserts with an s.)  On a happy note, I came back home and had lost a pound.  Apparently, when you do nothing but sit on a couch for eight days in a row, you lose muscle, which weighs more than fat.  Oh well.  Whatever it takes.

6.  Women who brag about how many kids they have.  This, too, provokes my own psuedoanger.  We ran into a few of these last week.  The bragging usually comes in a shoddy disguise of eye-rolling and sighing as they shift their newest baby from one hip to another.  “Oh, you’re so lucky you only have three!  I just can’t get anything done!  But, I wouldn’t trade them for the world….”  Blah blah blah.  Whether you have one or five or eight kids, there’s always someone with more, and every mother’s had to hear this from another mother at some point.  (Let’s take a minute here and think of a good response to these fertility-braggarts.  How about, “We were gonna have more, but I didn’t want to get fat again,” or “We decided to buy a boat instead.”  Or even better:  “I think kids are annoying.  Why would you do that to yourself?”  Oh, that one would be tasty.)

7.  How much better Diary of a Wimpy Kid 2 was than the first movie.  It really was; better writing, funnier, more tender.  I actually enjoyed the first movie as well, but Jaimy has some deep, festering psuedoanger toward it.  (Don’t get her started on the scene in the garage with the skanky magazine.  Just don’t do it.)

8.  The Silence of God.  This is a schmaltzy LDS fiction book that I would normally avoid, but for some reason found enjoyable.  (Maybe because I was living at my parents house when I read it and my defenses were down.)  The author sugarcoats the Bolshevik Revolution in the same way Anastasia (the cartoon) did, and that’s the way I like to experience war.  Jaimy read it on my recommendation and still hasn’t forgiven me.  Every time we talk about books, which is quite often, she remembers the hours she wasted on this psuedohistoric travesty and her words turn sharp as her eyes blaze.  I’m learning to avoid the topic altogether.  It kind of skeers me.

9.  Malls.  We’ve both decided that we’re above (read: not qualified for) them.  Consider it the combined product of lack of style, lack of funds, lack of interest.  In sum:  we’re approaching middle age.  At any rate, this self-righteous psuedoanger keeps us both from feeling bad that we’re too old and too chubs to shop at Forever 21.

10.  Our living so far apart.  It usually goes something like this:
“I wished you guys lived closer!”  Jaimy gives me a hard, unfriendly poke in the ribs.
“I know, me too!”  I poke her back, a bit harder, to make my point.
“Our kids could play all the time…”  She uppercut-pokes me  just beneath my psuedobreast.
“Yeah, and my girls could babysit for you…”  I smile desperately as I slap her on the back.
“I’d pay them really well…” She slaps my back a bit harder to make her point.
“Oh, you wouldn’t have to…”  I decide to slap her upside the head, so she knows I really mean what I’m saying.
“Oh, I would!  My kids just worship your girls…”  She slaps me back, but goes for my cheek this time.  I want her to know how much I care, so move in for a head butt as she pulls back for a right hook.  We beat each other fiercely for the next five minutes, each of us determined to convey the intensity of our anger that we live so far apart.  A black eye and bloody nose later, the bonding is complete.

And now for my #1 Provoker of PsuedoAnger:

How much better Jaimy is aging than me.  Like she’s told me before, she’ll “always be younger!”  Cruel. Would you want someone this pretty psuedoangry with you?