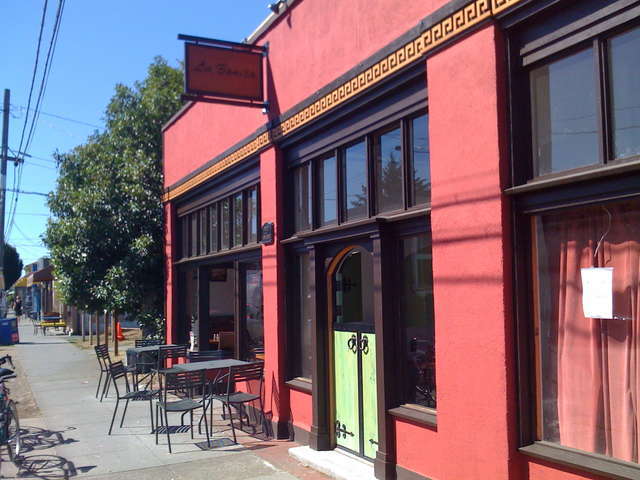 I won’t bore you with details. Just know that Derrick and I took a quick jaunt to Portland this last weekend to celebrate his partner’s retirement and, evidently, to stuff our faces. We stumbled upon Alberta Street, which is an artsy Portland neighborhood we’ve somehow missed all these years. It would seem that Alberta Street’s sole purpose in life is to feed its visitors well. It does.  It did.  Oh, my three faithfuls, it did.

We followed this “light” meal (all Asian food is practically diet, right?) with a shared Chocolat crepe here:

Think handmade nutella, hazelnuts, and cinnamon ice cream over a crepe so gooey and crispy, it could almost pass for an elephant ear.  In a good way.  Diabolically delicious.

We were also lucky enough to meet Suzette, face to face.  He seemed really nice.

We woke up the next morning to a huge breakfast at the hotel.  Think Belgian waffles, scrambled eggs, and a big white crusty bagel that would make Dr. Atkins very, very sad.  We shopped a little then quite naturally decided we were hungry for lunch.  We hopped back over to Alberta Street to try out a taqueria that had caught our eye the night before.

Yeah, we ate all that.  With no regret.  I am a Mexican food psycho and let me tell you, this was about the best I’ve ever had.  Think salt and fat, with just enough fresh veggies thrown in to make it respectable.

Approximately four hours after this sumptuous lunch, we reported to our good friends’ place for a barbeque to rock all barbeques.  The lovely hostess, Lisa, has a gorgeous home, great taste in food, and knows how to treat her guests.  I anticipate her gatherings like a child does a birthday party.  She’s that good.

As usual, I did not have my camera with me, and even if I had, did I really want other adults watching me take pictures of the food?  People might start to think I don’t get out much.  I found a few photos online to represent the fare we savored.  This wasn’t hamburger and hotdogville, if you know what I’m saying.  Think tri-tip, pork loin, and the like.  Think fresh fruit and yummy cheeses and breads and crackers a myriad of desserts to choose from.  Think me, happy, and still somehow not too full to down another meal.

And you may think baked beans aren’t anything to blog about, but that’s because you’ve never had Lisa’s.

I have decided that if I behave myself in this life, I will wake up in the next doing the butterfly stroke in a bowl of Lisa’s baked beans.  (I chose the butterfly because you have to open your mouth really wide when you’re above the water.  But I digress.)

At about nine o’clock, we tore ourselves away from the dessert table and started the three-hour drive home.  It should have been a chore, but we were still glowing (sweating) from our recent foodie adventures.

I did wake up this morning feeling a little stuffed from our weekend of eating, so I decided to lighten things up with baked ravioli and homemade bread for dinner.  A carton of Tillamook Mudslide is softening as I write this, and I think it will be an appropriate end to my weekend.

I’d love to stay and chat, but I have to get ready for bed.  I’m meeting my friends at 6:30 for our standard early morning run.  I still enjoy running, but am a little frustrated that I don’t seem to be losing any weight from it. 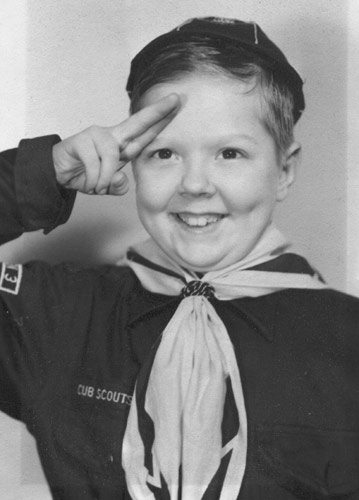 …you come home from the Scout Office on a major high, because you just learned that your cub pack has earned the ever-elusive Journey to Excellence scouting award.

On the offchance that you may not be familiar with this award, let me explain:  It’s an annual award each pack can qualify for by achieving a certain number of points for training, activities, participation, etc. throughout the year.  A Bronze, Silver, or Gold award is earned based on the pack’s accumulated points at the end of the year.  Naturally, as your pack’s fearless leader, you strive to earn the Gold.

Now here’s the kicker:  Our pack, as of July 28, has already earned enough points to qualify for the Gold award for the entire 2011 calendar year.  We could do almost nothing between now and December, and we’d still earn it. (Not that we’d dream of shirking our duties in that way, for any scout moms who may be reading.)

So this morning around 9:15, I had to look myself in the mirror and make a grisly confession:  I am invested in my scout calling.  I…um…care.  Yikes.

Rewind three weeks to the famed Christensen family reunion.  Yes, my three faithfuls, the one following the Great Transmission Meltdown of 2011.  (Thanks for reminding me.)  I could post so many great things about this killer reunion (no sarcasm here; they actually are fun) but in the interest of time, I’ll just start with the bling.

Every year, my extended family engages in a highly-competitive tournament which displayes athletic prowess the likes of which you’ve never seen.  It is a mind-numbing, sweat-pouring, spirit-crunching game not meant for the faint of heart:  Holey Boards.

Have you heard of it?  I understand it’s pretty big on the RV circuit, so chances are, you know all about it.  Remember that carnival game wherein you throw bean bags through the clown’s mouth?  It’s every bit as difficult, and every bit as asinine:

The Christensen obsession with this diversion started when my sister and her hub brought it with them to our very first annual reunion, some six years ago.  It was set out as an afterthought, since it’s usually busted out during only the most desperate camping situations.  The game picked up steam, however, when my uncles realized it was rooted in the ancient art of their childhood love, horseshoes.  (Did I mention that I was born in Idaho?)  Next thing we knew, points were cheered, wagers were made and trash was talked.  I said our reunions were fun.  I did not say they were classy.

By the following year, it was obvious we needed a more organized approach to this hot mess.   As HB was brought to us all by my sister Julie, it was only fitting that she use her elementary schoolteacher uberskills to develop… Above, you see The Bracket for 2011.  A closer viewing will reveal that the winners of this year’s tourney were, ahem, yours truly and yours trulier.  That’s right, my friends, Derrick and I finally did it! After six long years in the losers bracket, the thrill of victory finally trumped the bitterness of defeat. And it wasn’t your standard holey board victory, either.  Oh no.  We won every single game we played, flying undefeated through the winners bracket for a perfect 5-0 victory: It may interest you to know that up until last month, every one of my siblings had their names on the  traveling trophy/piece of plywood except me.  You thought I had middle-child issues before?  Imagine how long I had Dr. Laura on the phone trying to work out this indignation.  Doug won it.  Julie won it.  Jaimy won it (twice!)  But Jenny?  Jenny in the middle?  No, no. No trophy for middlejenny.  Just one more chip stacked on middlejenny’s shoulder.

Until June 25, 2011.  What were you doing that Saturday evening, at about 7:15 pm?  Did you hear middlejenny’s chip drop from her shoulder to the ground with a great big thud, reverberating through the great pine forests of central Idaho?

Tradition stands that the reigning champions bequeath the traveling trophy/piece of plywood to the new champions in a formal ceremony that takes place on Saturday night right after the grandparents’ skit but just before the Doritos and root beer.  It’s a solemn moment as one team passes their Holey Board Championship Title–and all of its accompanying responsibility–to another. But this year, the moment of gravity took on fresh meaning as last year’s champions–my cousins Kole and Rex*–presented Derrick and I with hand-welded washers in the shape of all that is Pimp Daddy: Apparently Kole’s parents, my Aunt Loni and Uncle Tony, designed and welded–welded, my three faithfuls–this ornate jewelry as a tribute to all that makes up Holey Board Culture itself: cheap, tacky, and somewhat confusing. Welded.  Can you fathom it?  Does your own family take anything this seriously?  Religion and education don’t count.  I mean something interesting.

Long story short:  Derrick and I won the Big Tournament.  We took home one traveling trophy, two MacDaddy necklaces and a ring a piece, dripping in bling.  And on top of all of this, we took home our pride.  During the closing ceremony, my father announced that he believed this victory saved our marriage.

No one really laughed. A quiet moment together after the drama and the glory.  What would our future hold now? Whatever it may be, one thing is certain:  They can’t take our Holey Board Victory away from us.  Not ever.

*Traditionally, spouses compete as partners in Holey Boards.  But as Rex and Kole were single at the time, they united as a team and went on to victory.  My brother commented under his breath that “only under President Obama could two men win the Holey Board Championship.”  A bit tacky, but pretty funny.  Much like my brother.