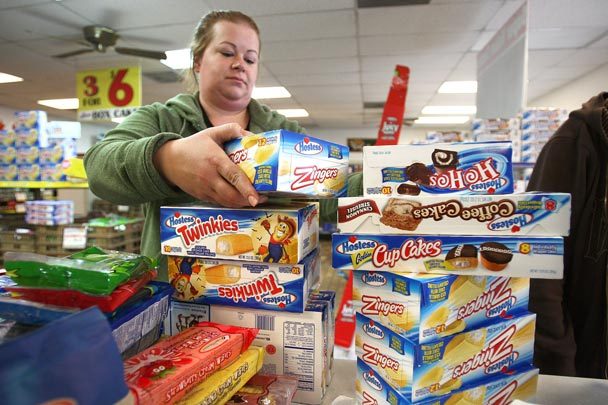 I have always been proud to call myself a conformist.  As a child I loved school, as a youth I loved my parents, and as an adult, well–you know how I feel about church, planned communities, and Target.  I am  a lover of The Establishment, Americana to the core.  When I hear people brag about “dancing to the beat of a different drum,” I usually assume they just weren’t getting enough attention dancing to the drum provided.  (I’m kind of judgmental that way.  Sorry, different-drummer-dancers.)  I think Normal is fantastic and Fantastic, normal.  It’s a fine worldview that has served me well in virtually every aspect of my life, save one.  In one facet of my Pollyanna existence, I find that Normal is not only non-fantastic, it’s downright deceptive.  In this facet, I find that Normal is wrong.  And in this facet I find, to my deep shame and chagrin, that I must not conform.

In fact, I love Zingers.

Wait, did I forget to italicize?  Beause what I meant to say is: I love Zingers.

Ever heard of ’em?  They are Twinkies with frosting, and about a hundred times tastier.  And as an added bonus, they’re even worse for you.   A climbing buddy of my husband’s conducted some research once and found that Zingers are the most calorie-dense junk food on the market. In light of that indisputable fact,  how could they not be delicious?  The fat content of Zingers qualifies them as both the perfect extreme-sports energy bar and an ideal snack for on-the-go, undernourished moms like me.  Some days, between driving to piano and then soccer and then Botox, we self-sacrificing mothers need a little pick-me-up.  I know some women think keeping a bag of baby carrots in you purse is the solution, but I say:  why waste all that time nibbling like a rabbit when you can swallow a Zinger in one gulp and save yourself the jaw fatigue?  (Not to mention the floss.) It’s energy efficiency at its best, the Zinger.  And, unlike the ho-hum Twinkie, it comes in vanilla, chocolate, and raspberry.  Oh, the raspberry.  Give me a couple of those darlings, a bag of Doritos and a carton of chocolate milk and suddenly it’s 1982 and I’m riding in the backseat of the Buick  on every family road trip of my childhood.  (The road trips were usually to Boise; the food was on theme.)

So, when Hostess announced that it was closing its doors this week and the entire country went into a Twinkie rapture, you can imagine how insufferable it was for a nonconforming Zingerlover like myself.  Everywhere I turn, I’ve had to listen to the Twinkie sheep weep and wail about the demise of their shepherd:  How will we raise our children in a land without Twinkies?  Who will recognize these United States of America without its national childhood treat on the shelves?  Boo-hoo, I thought.  Who cares?  Who needs dry spongy Twinkies when moist, frosted Zingers are still available?  I have to admit, I felt pretty smug as I read about Hostess going under, knowing that my infinitely superior Zinger would, at long last, reign rightfully supreme as Queen of the Preserved Packaged Pastry.   No longer would that fresh-faced raspberry beauty share shelf space with her yellowed, aging great-aunt.  At long last, a cultural underdog would be represented not in Congress but on the free market.  The people had spoken, and Zingers–so long ignored, so long downtrodden–had finally triumphed over her oppressors.  And as the self-appointed head of her army, I found myself suddenly, unexpectedly, victorious.  Geez, I thought.  This nonconformity gig’s not so bad.

But what could I do?  There was only one thing I could do, and I did it:

I actually took a picture of my Zinger run, but my camera is goofy so I’m using this stock photo as an eerily accurate portrayal of what I’ve been up to this week.  (I mean, look:  the lady has my haircolor and this store looks like a Walmart.  Whoa.)

So, in the end, I had to eat one (or three) each of a vanilla, chocolate and raspberry Zinger, in a humble gesture of gratitude, goodwill, and goodbye.  I hadn’t had a tri-flavor Zingerfest in many years, and it did not disappoint.  As I sunk my teeth into the soft cakes, creamy frosting, and fluffy filling of my childhood I wept, along with the sea of Twinkie drones, for the Brave New World in which we now find ourselves.  I mean, isn’t the point of capitalism to keep the best products on the free market?  Perhaps it’s time we, as a people, reassess our economic structure and re-prioritize what we’ll do with it.  Forget healthcare; let’s nationalize Zingers.

And maybe it’s time for me to admit that whole Nonconformist Thing just doesn’t really work for me. Even when I try to think outside the box, I always end up jumping  right back in.  Try as I might, I will forever find myself weeping with those that weep and mourning with those that mourn–especially over factory-produced pastries.  In this case, I tried to be a maverick and I ended up a minion, so I guess you could say that I got my just desserts.  Which is good, because it looks like I’ll never get them again.

Unless a black market in Canada opens up.

You don’t have to burn books to destroy a culture.  Just get people to stop reading them.

Goodness.  I think I could spend the rest of my blogging-life (blife?) simply posting Ray Bradbury quotes.  Maybe I will.  They would be easier to write–and much more enlightening for you to read–than the junk I come up with.  I could just copy and paste his magnificent thoughts onto my blank screen and then add my own special little touches to the mix.  (Like to this quote, for example, I might add:  or get people to only read books about vampire nookey.)  Did you know that Ray Bradbury didn’t spend a day in college, but rather spent ten years educating himself at his local public library?  He said by the time he was done, he’d read every book in the library and had written a thousand stories.  Goodness.

I have an idea.  Maybe rather than merely republishing his words, I could transform myself into the Ray Bradbury of the digital age.  I’ll simply adopt his general view of the universe and incorporate it into the issues that I contend with every day, thus impressing all readers with my insight and candor.  So: what do you think Mr. Bradbury’s positions would be on hair product, minivans, and Walmart?  Sunless tanner and turtlenecks?  Potlucks and PTA meetings, spandex and spinach lasagna, paying bills and paying allowance, dealing with teen drama and mom drama and, occasionally, the depressing lack thereof?

I don’t know.  But I do know I’m glad that, in the midst of the aforementioned minutiae which makes up my life, I can pick up a book by someone like Ray Bradbury and think about something a little larger than myself.  (I said a little larger, my faiths–don’t worry; I’m not getting humble on you.)  And I’m glad that I came across this quote.  Brilliant quotes by brilliant people make me happy.  You?

And speaking of you:  what do you think of this statement?  Are we there yet?

I know what I think.

I’ve always wanted crutches.  Who hasn’t?  They look so fun.  Back in high school, every few months a kid would show up to school on crutches, usually from a sports injury of one kind or another.  I was always a tad jealous.  If the injured was male, he’d lean against the hallway in his letterman jacket and just stand there looking tough, boasting his crutches like a battle scar.   If the injured was a girl, however, those crutches were her keys to the kingdom:  they got her attention, sympathy, a viable excuse from P.E., and then a little more attention.  She’d hobble a few feet from her locker until a guy–always a guy, usually a cute one–rushed up to take her books and walk her to class.  It didn’t matter if the be-crutched girl was a freshman or senior, pretty or plain; adolescent males were just dying to prove their blossoming chivalry.  It was a beautiful thing to behold.  I wanted  crutches so bad.  And I still do.

I want to lean my weight heavily against  the steadiness of the wooden handles, my arms hanging idly over the top and thus incapacitated for any work besides pushing myself along.  I want to feel the solid cool of the metal bars against my weak, malleable hands.  I want to hear the stead thud of the circular rubber sole as it sinks into the ground, transforming each clumsy step into one of determination.  I want to swing my bent, casted leg back and forth against the current of forward motion, like a child on a swingset.  I want others to gaze on me with admiration as I cheerfully endure the hardship imposed upon my virtuous nature.  On crutches, everything I said or did would be cloaked with an aura of genteel long-suffering and my simplest gestures would become noble.  Smiling, laughing, sheepishly asking for help up those stairs–even shaking out my hair and licking my lips would look adorable were I so en-crutched.  And–most importantly–if I was on crutches, people would finally listen to me!  A woman on crutches is a woman who knows her mind.  Who can argue with her?

And yet, for all my discussion on the topic, I must accept the fact that even though I’ve always wanted crutches, I really don’t need them.

But here’s the punchline:  I use them all the same.  I do.  I live my life on crutches.  The kind that have nothing to do with a broken leg.

And  I use them for all the same reasons–and results–listed above.

(Unless you tell me what yours are.)