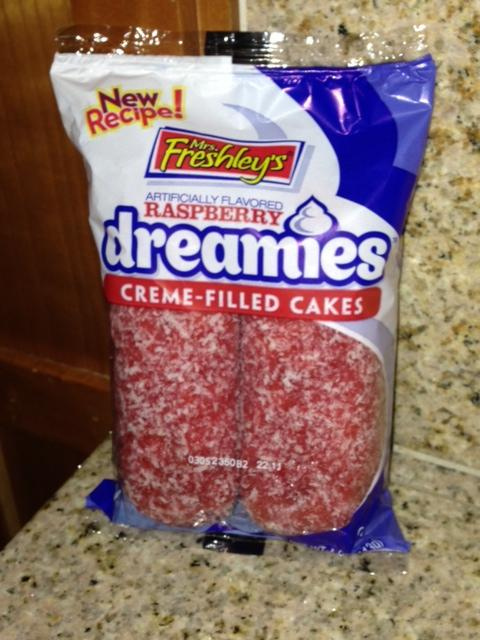 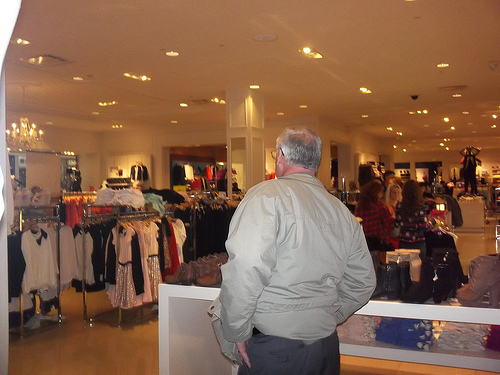 on a day in late December, when my mall-loathing, shopping-phobic, clothes-contempting man’s-man-of-a-dad-who-refuses-to-wear-cologne-or-flip-flops-but-still-carries-a-handkerchief-should-any-lady-nearby-need-one found himself trapped in a mall with me, my brother, my niece, and the car parked a long, cold mile away.  His usual shopping mall refuge–the big leather couches parked in the hall–were nowhere in sight that day, so he was left to follow me through the stores like the lost little puppy he was.  My nose for a deal (i.e., cheap tacky clothes) led me to Forever 21 (i.e., Old Navy for Middle-Aged Women In Denial.)  As a 39-year old “hip” mom (i.e., finally able to afford clothes that I’m now too fat to wear) you can imagine how eagerly I jumped across this retail outlet’s glittering threshold.  That enormous studded belt, those paper-thin thigh-high boots, that holey, see-through “sweater” that smacks of the afghan my Grandma Vivienne stitched me for high school graduation–all such pieces would prove the salvation of my youth.  Why spend thousands of dollars on a facelift when you can spend thirty bucks on a new Forever 21 ensemble, and have change left for Cinnabon on the way out?  (Don’t worry–the thigh-high boots will hide the minibon damage.)  Scanning the racks for a starting point, I could feel my pulse race with the monstrously loud music that I believe was wasted on my father, who has never developed a real appreciation for Katy Perry.  I grabbed one of the oversized mesh shopping bags (a la Old Navy–you see?), slung it over my shoulder, took a deep breath and emotionally geared up for some serious drive-through shopping.  And while doing all this, my faithfuls, I also did something I’m heartily ashamed to admit to you now.  I did something selfish and cheap and mean.  I did something that was, I think, unforgiveable.  Or at least grossly irresponsible.  My three blessed faithfuls, would you believe me if I told you that I left my father all alone in Forever 21?

Alone.  Scared and confused, discouraged and disoriented.  My kind and modest father–who refuses to set foot in so much as a JC Penney on the principles of his rugged Idaho upbringing–was now left afloat on a sea of camouflage leggings and spiked denim jackets, the hapless victim of his middle daughter’s raging self-absorption.  Luckily, the years of hunting, scouting, and mapping had equipped him for such an emergency and he had the presence of mind to call for immediate assistance.  He whipped out his phone and dialed his only son.  No luck–his only son was long gone to Cinnabon, not to be disturbed.  He tried calling his niece, but the fourteen-year old had already ditched Forever 21 to go to a “real” store.  (Teenagers think they know everything.)  In a final act of desperation, he tried calling–and I mean, for real calling–his daughter, the very ingrate who’d dragged him into this mess.

“Jennifer!  Jen-i-fer!?”  He cupped his mouth and raised his normally soft-spoken voice.  “Where are you?”  He turned a full circle in the  accessories department where he stood, the glare from  the shiny-shiny purses hurting his eyes as he squinted through a waterfall of leopard-print scarves, hoping for a glimpse of his vanishing daughter.  Little did he know that Jen-i-fer couldn’t hear him, because Jen-i-fer was already in the dressing room, greedily trying on twenty-nine different articles of clothing (from which she would ultimately purchase: one.)  Little did he know that Jen-i-fer‘s trademark vanity had already made any thought of her poor abandoned father a long-distant memory.  Jen-i-fer  pulled on “sweater” (afghan) after “sweater” (afghan) while her ailing parent cried out desperately in the next room.  But rather than respond to the wailing, Jen-i-fer simply smiled and sang along with what she thought was the chorus to Firework.  And so it took awhile for her to hear her phone, which was tucked in the pocket of the jacket under the heap of the twenty-nine different articles of clothing (from which she would ultimately purchase: one.)

“Hello?”  She answered gaily, unable to keep the bargain-shopping high out of her voice.

“Jen?  Jen?”  Her throat closed as she realized who was on the line and she suddenly remembered her father’s helpless face receding in the background as she ran ahead for the dressing room, elbowing her way past two tweens who threatened to snatch up the last vacant stall.  The image shook her out of her shopping coma.  Oh wretched woman, what have you done?

“Jen, are you there?”  There was static and a bad connection; she could’ve sworn she heard mayday shouted in the background.

“Are you sure?  Oh my gosh, I left you there all alone, without anyone to babysi–um, help–you…”

“I found the couches.”  She drew in a sharp breath.

“Dad, don’t move.  Don’t go anywhere.  I’ll be there in two minutes.”  She grabbed her purse and the sweater/afghan (swafghan?) and hurried out of the dressing room, ready to fly through the register and into the arms of her devoted father.  Her self-flagellation was severe; how could she have? Never again would she be so callous.  Never again would she let her greed hurt those she loved.  Never again, she promised herself, would she sell her birthright for such a (tacky) mess of pottage.

These valiant thoughts swelled in her breast as she rounded the corner and headed for checkout, until she saw that the checkout line was approximately six blocks long.  She looked at the line, looked at the exit, looked down at the item she held in her hand.  She could leave it behind and go get her father.  He needed her more than she needed this material object.  He was her father, for crying out loud, and this was just one little article of clothing.  It was just a thing.  Right?  Right.

But.  She did have to try on twenty-eight other articles of clothing to find this one, and hadn’t father always told her,  “Waste not, want not?”  (She assumed that applied to time spent in dressing rooms.)  And besides, she told herself, inching her way up the line, as long as the mall provided Soft Leather Couches, her father would always be waiting for her.

The swafghan, however, would not. For so many things.