I’ve always thought of St. Patrick’s Day as a holiday that warranted little celebration on my part; besides, of course, enjoying the sheen of green paper shamrocks plastered all over Target, Big Lots, and my kids’ schools (listed in order of importance, btw.)  This year, however, St. Patty’s fell on a Sunday, and I decided to both honor the Sabbath and commend this Important(?) National(?) Holiday(?) by doing a good deed and spreading the Luck ‘o the Irish around a little.  What can I say?  I’m the type of gal who likes to Pay It Forward. *

So, while sitting in church yesterday, pondering over what service I could render that would be meaningful on this most meaningful(?) of holidays(?), my eye was drawn to a small shiny object sitting on the floor beneath my chair.  Upon closer inspection I saw that it was a crumpled up gum wrapper, presumably castoff by some careless churchgoer whose worship was obviously not as pious as my own.  Blimey, I thought, who would litter at church–especially on a Saints’ Day?  I did not know who would litter, but I did know who would pick it up:  humble, reverent, ever serving-my-fellow-man me.  I sighed and as I bent down and reached for the wrapper, once again feeling the burden of my keen spirituality.  Such a responsibility.

But as I stretched my arm and tried to close my fingers around the object of refuse, I found there was no wrapper to grip.  Instead, my fingers curled through what seemed like nothing–just cooler air–and closed, empty, into a fist.  So I tried again, and again–nothing.  Only that strange cooling sensation where my fingers were grasping.  As it was St. Patrick’s Day and a day to trust in all things lucky(?), I decided that the third time would, indeed, be the charm, so I widened my grip and scooped over the gray-carpeted area one last time, making sure to drag my entire hand slowly and thoroughly over the area of interest.  Finally, I could feel that my fingers were curling around a mass of something (why was it so cold?), so I sat back up in my chair and looked around for a trash can, ready to hop up and triumphantly toss the wicked wrapper into oblivion.  However, when I opened my fist, it was not a gum wrapper that resided on my ignorant appendage, but rather a grotesquely palm-sized blob of thick, white baby puke.  Or what I hoped-against-all-hope was, in fact, merely baby puke.

So much for my big-hearted act of St. Patrick’s Day Service.  So much for my proverbial pot of gold at the end of the proverbial rainbow.  If this is all that this revered(?), inspirational(?) holiday can offer, I’m sending St. Patrick back to the pubs.  Where he can do some real good.

*Did you ever see that movie?  Owie.  I think that was the beginning of the end for Helen Hunt.

The only thing worse than too much female drama in one’s life is too little. 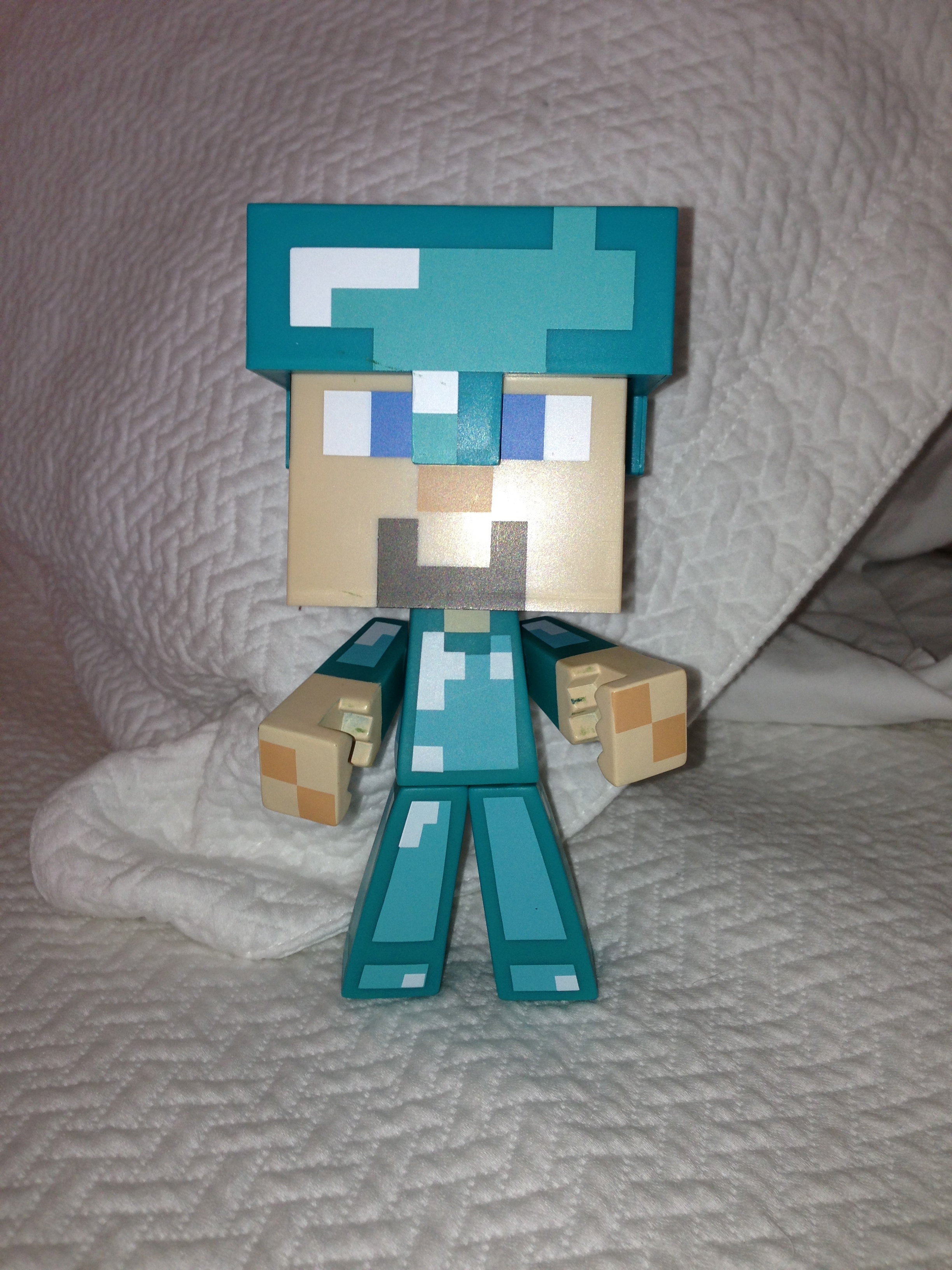 is that he might spend thirty dollars on this. 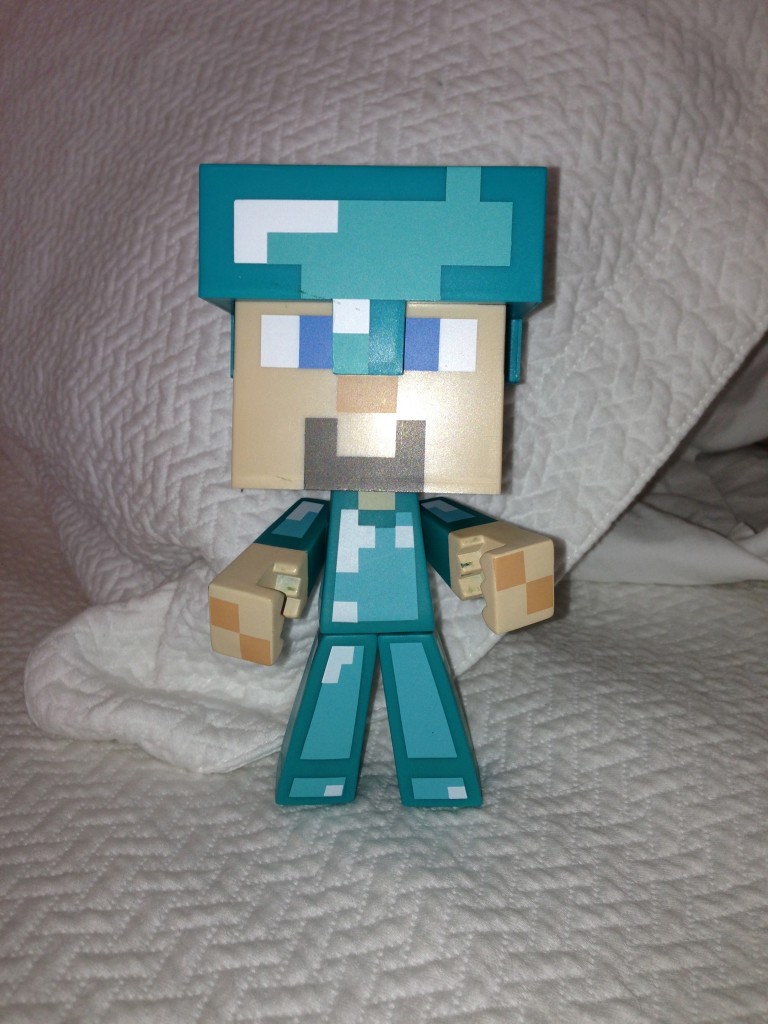 Steve is a Minecraft figure, and has been the object of Ethan’s desire for the past two months.

I am not still not sure what Minecraft is, but I know it has something to do with the many hours my son spends hunched over the iPad while I, myself, am hunched over facebook, yelling “just a few more minutes on that game, buddy” every now and then to make us both feel better.

Steve does not do anything.

He does not move.

He does not make noise.

He does not shoot lasers.

He is not a good snuggler.

And he cost Ethan thirty dollars.

Meaning that, over the last few months, Ethan has stockpiled his meager allowance and finally saved up enough to buy this non-toy.  We told him he could spend it on anything he wanted, since his sisters get that privilege on occasion as well.  But we did not foresee Steve–the tiny, silent, immoveable, non-action action figure that cost thirty dollars.

But Ethan wanted Steve.  He begged us to let him spend his hard-earned(ish) money on Steve.  He passionately reminded us that we promised him he could spend the money how he chose.

Yes, we had promised him.  What could we do?

We got online and ordered Steve.

And I paid the $9.95 shipping fee because I couldn’t bear to squash Ethan’s triumph by telling him he’d have to save up another ten dollars to have Steve mailed (which, according to my estimates of Ethan’s earning power, would take us into the latter part of August.)

Typing in $39.95 in the “amount due” box, I pushed the lump in my throat down by assuring myself that when Steve arrived in the mail, he’d be somehow bigger or brighter or better.

He stood six inches tall and did absolutely nothing.

Except stand on Ethan’s desk and, according to Ethan, “protects him” at night.

And although Ethan “paid me back” with thirty one-dollar bills, that $39.95 for this six inch piece of plastic still came out of my checking account.

Somebody over at Minecraft is laughing at me.

(p.s. Steve doesn’t laugh, either.  Just smirks at me every time I walk by him forty dollars poorer.)