In my house, turning the tv off for a week wouldn’t be hard,  but getting my kids off of the computer and iPad would. Maybe I should try it.  Check out a short article about that here. I’m not big on posting links, but this one is good.  And short.  (Did I mention that already?  It’s important.)  And don’t be turned off by the blog’s title–it’s actually pretty thoughtful and upbeat. And I like the main writer because she once admitted she doesn’t know how to decorate.

Last weekend I heard an interesting thought that I want to share with you.  It’s a thought about thoughts, if you will.  (And I hope you will.)  You’ve probably already mulled over this idea, because strayjuniormint readers are critical thinkers by nature (just look what you’re choosing to read right now!)  But indulge me and pretend that I’m telling you something you don’t already know, ‘kay?  Thanks.

Have you ever really paid attention to how you think, and what you think about?  Do you think on purpose?  That idea really struck me, thinking on purpose.  I’d say that occasionally I think on purpose, but it never lasts long, and I certainly don’t think on purpose regularly.  I tend to let my mind wander a great deal as I go through the motions of my day, which isn’t unusual and certainly isn’t fatal, but also doesn’t allow for the optimum use of my brain, which is unfortunate, as it’s one of the few magnificent things I possess and woefully underutilized.

Did you know that we can actually choose our thoughts?  I’ve often been told to control my thoughts, but rarely have I considered choosing them.  That’s a step beyond controlling them, I think.  Controlling our thoughts implies blocking certain things from entering our mind, or not allowing certain things to enlarge there.  But choosing our thoughts seems, to me, the higher and happier purpose of controlling them in the first place.  Once we’ve controlled the bad ones, we can then choose from a myriad of good ones–kind of like choosing a candy bar from the abundant convenience-store shelf (Kit Kat all the way, unless they have Reese’s Dark.)  This is where our species’ gift of creativity comes in and why I’m so thankful, once again, to have the mind of a human being and not that of a garden-variety mammal.  (No offense, Garden-Variety Mammals.  Some of you are cute, but you’re all boring.)

Having good thoughts is more than just not having bad ones.  The good thoughts I select are what makes me me, and yours are what makes you you.  And guess what I else I found out?  People are happy based not on how they look or what they have or even what they can do, but on what they choose to think about.  Absorb that with me.  What if it’s true?  Can you imagine?  Replace the bland word of happiness with things that you really want–confidence, satisfaction, excitement–and imagine that all of it rests within the parameters of your own mind, which is portable, invisible, free of charge, does not fluctuate weight based upon the amount of carbs you eat, and is completely off-limits to everyone else but you.  What if I choose to think, for example, that I have so much beauty and wealth, I never need to envy another person again?  What if I could go one step further and make that choice a habit–choosing every day to leave any kind of envy behind, for good?  (Or insert any vice of your choosing here.)  How would that change my life?

So, what do you want to think about on purpose, today?  A deep, philosophical matter, an inspiring spiritual one?  How about a fun personal goal or a dream for your children or how to make your marriage better?  Or maybe what color to paint the bonus room, whether to plant a garden, how to like your part-time job more? (check, check, and check on those last three for me.)

My thoughts today will be a kaleidascope of all of the above, snatched in tiny ragged pieces between dishes and laundry and grocery shopping and piano lessons.  But snatch them I will.  And though they may be tiny and ragged, my thoughts today will, I’m determined, be more on purpose.  That means less spoon-fed thinking, like checkstand magazines and “harmless” gossip, and more deliberate thinking about what I want to do, and be, and give and create; there’s enough fodder in those thoughts to keep my little ‘ol brain occupied for life.

And now I’m off to do some purposeful thinking at Costco.  Do I go with the Kirkland Signature Peanut Butter Cups or the Ghiradelli Dark Chocolate Covered Pretzels?  Wait. That’s too hard. I think I’ll get them both. On purpose. 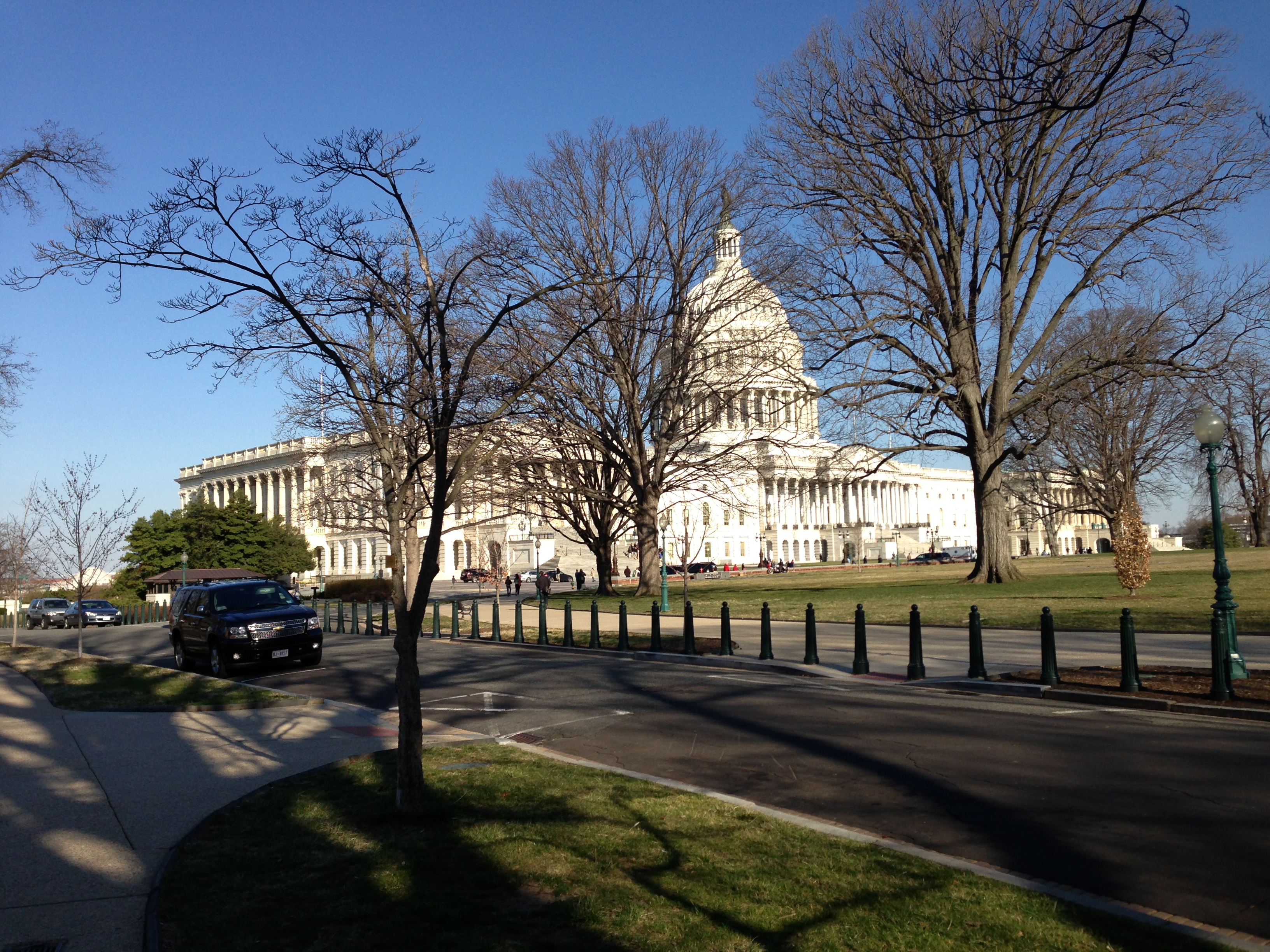 Day Two began with a fascinating tour of the U.S. Capitol building and the Library of Congress.  Both buildings were spectacular and  inspiring and made me want to sing the praises of democracy to all who would hear them. 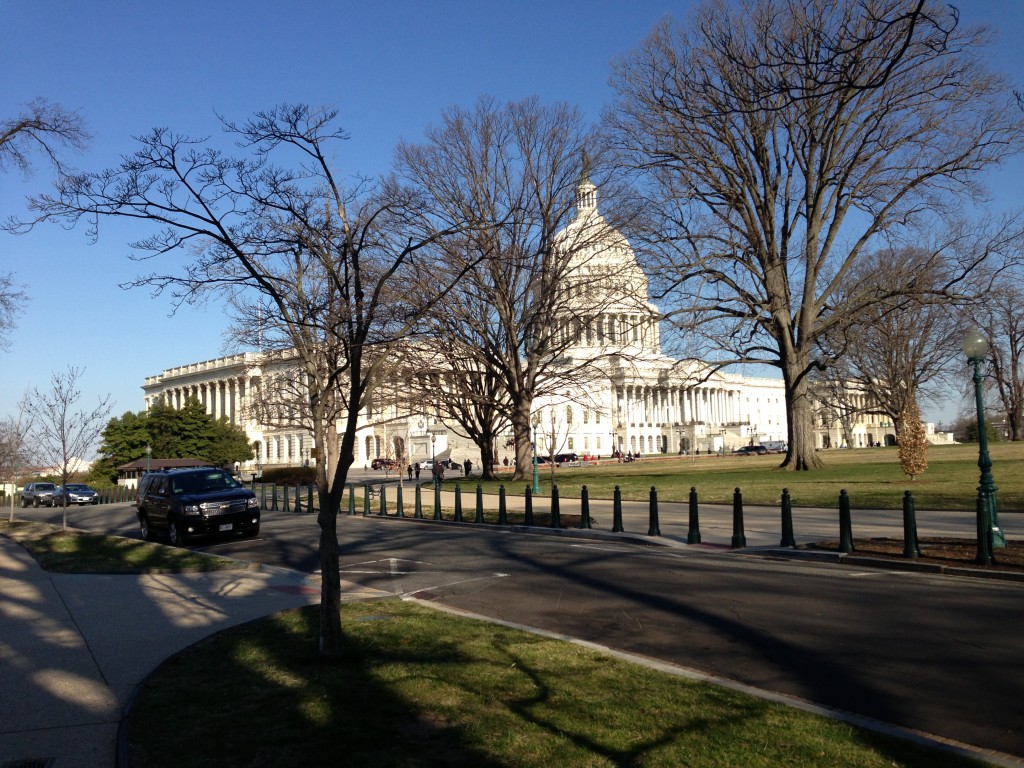 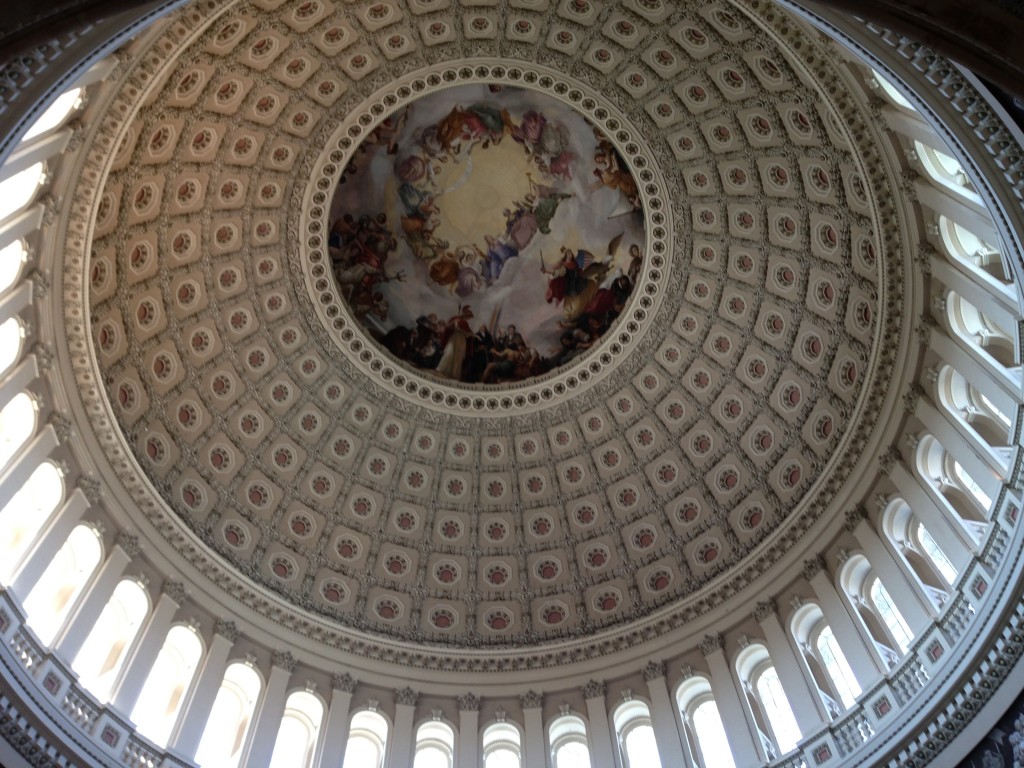 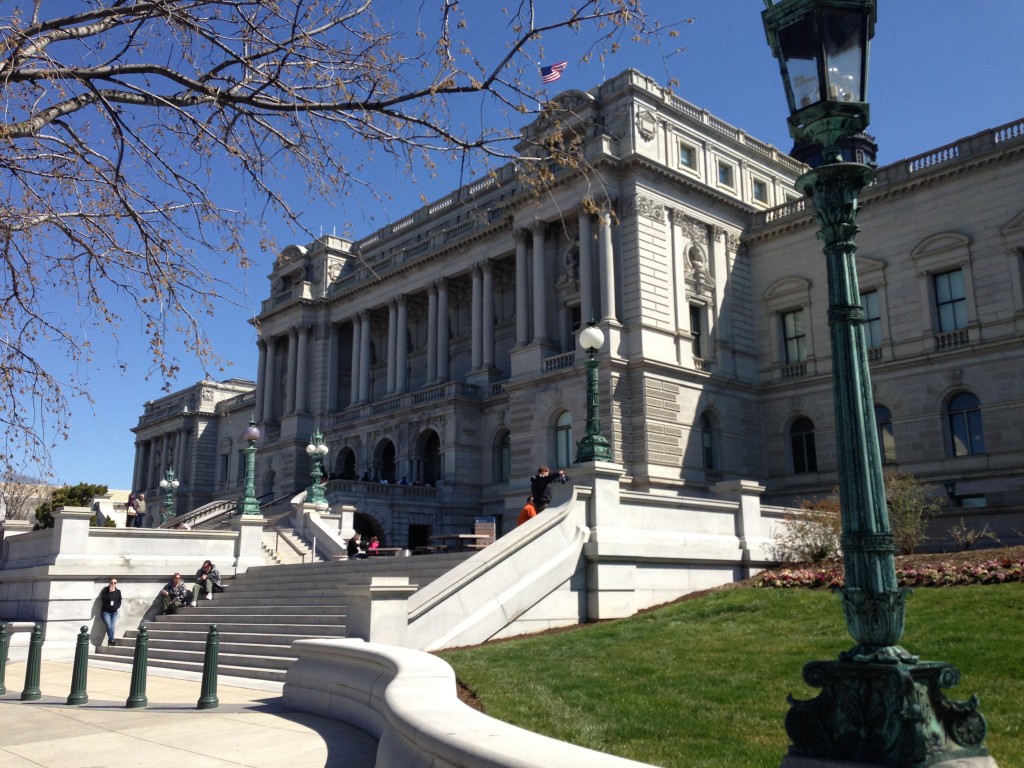 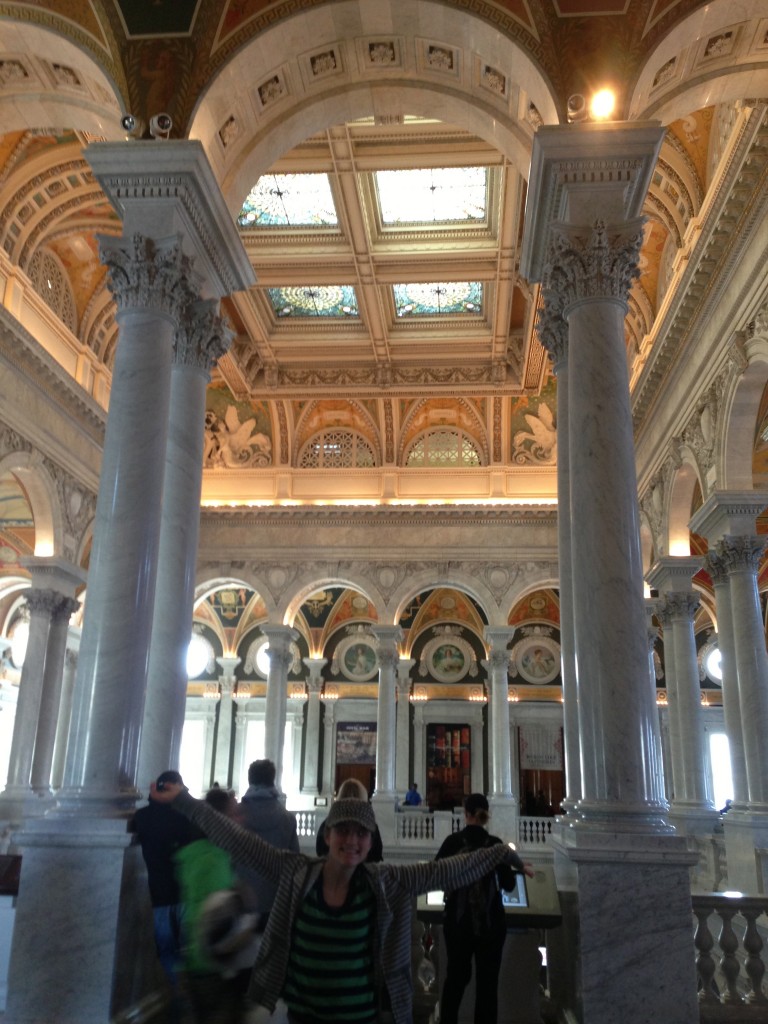 After our long morning our touring we decided, per Rachael’s request, to skip our planned afternoon at more monuments and instead take a bus ride out to Georgetown.  What was in Georgetown, you might ask?  (Besides the cruel evidence of a swanky and sophisticated life that was never meant to be my own?)  Why, what else?  DC Cupcakes!

Oh, you’ve never heard of this show on the Food Network?  Neither had I.  But apparently my daughters are big fans, and so Rachael politely requested that we go see the now famous cupcake shop while we were in town.  Translation:  she begged me to take a breath from what was becoming my weeklong lecture series on the Workings-of-Democracy and the

True-Price-of-Freedom (I was on a roll, and picking up steam with each passing monument), and take her do something fun.  So, though I myself had a hankering for the Holocaust Museum (who says I’m not a fun mom?) Georgetown it was.

And was it evah!.  Fabulous, just  fabulous.  Have you been there?  (I’m sure you have–I’m learning that everyone’s been to DC except me.)  It’s hip and historical and whimsical and dignified all at once, steeped in old money, modern shopping, and overager moms who step off the tour bus and stare shamelessly at the Georgetown coeds jogging by, effortlessly chic in their lycra and long ponytails and benign indifference to the chubby lady on the corner standing and staring and wondering What Might Have Been.

(I will tell you What Might Have Been.  I Might Have Been born to a blue-blooded east coast family who’s owned a home in Georgetown since colonial times, and then I Might Have been one of the “Daughters of the American Revolution,” and then I Might Have gone to an Ivy League school, [which I think we can all agree is where I really should have gone], and I Might Have picked Georgetown so I could live in my family’s townhouse while I got Really Smart and Worldly and on Tuesday mornings I Might Have jogged past the pathetic tourists outside the now ridiculously overfamous cupcake shop with my effortlessly stylish lycra on my long lean legs [I Might Have been taller and skinnier in this scenario] and my nose held high in the air.  Then I Might Have made friends in high places and married a Senator instead of an engineer [no offense, honey] and then I Might Have become First Lady and if I was worried about the physical demise of our species I Might Have launched a campaign to federally subsidize botox for women over forty rather than spending taxpayers’ money on a campaign to fight childhood obesity that will nevereverever do a single thing to fight childhood obesity.  Nay.  Never.  Nary a thing.)

Wait.  Where was I?  Oh, yes, standing outside of both Georgetown Cupcakes and the Georgetown Life I Should Have Had.

The long and short of it?  Georgetown Cupcakes was cute and fun and worth the surprisingly short fifteen-minute wait in line.  We ordered six cupcakes for $16.50.  (Yes.  Sixteen dollars and fifty cents for ten cents’ worth of cupcakes.  Just doing our part to keep the Georgetown set effortlessly stylish.)  The flavors were fun–Cherry Blossom and Salted Caramel among them–but the cupcakes themselves were, well, pretty good cupcakes.  Call  me an cynic,  but really:  they’re. just. cupcakes.  (And truth be told, the Chocolate Hazelnut was a tad dry.)  Diagnosis?  Fun and trendy and, as with all things famous, a little oversold.  But totally worth seeing.  And Rachael loved it. 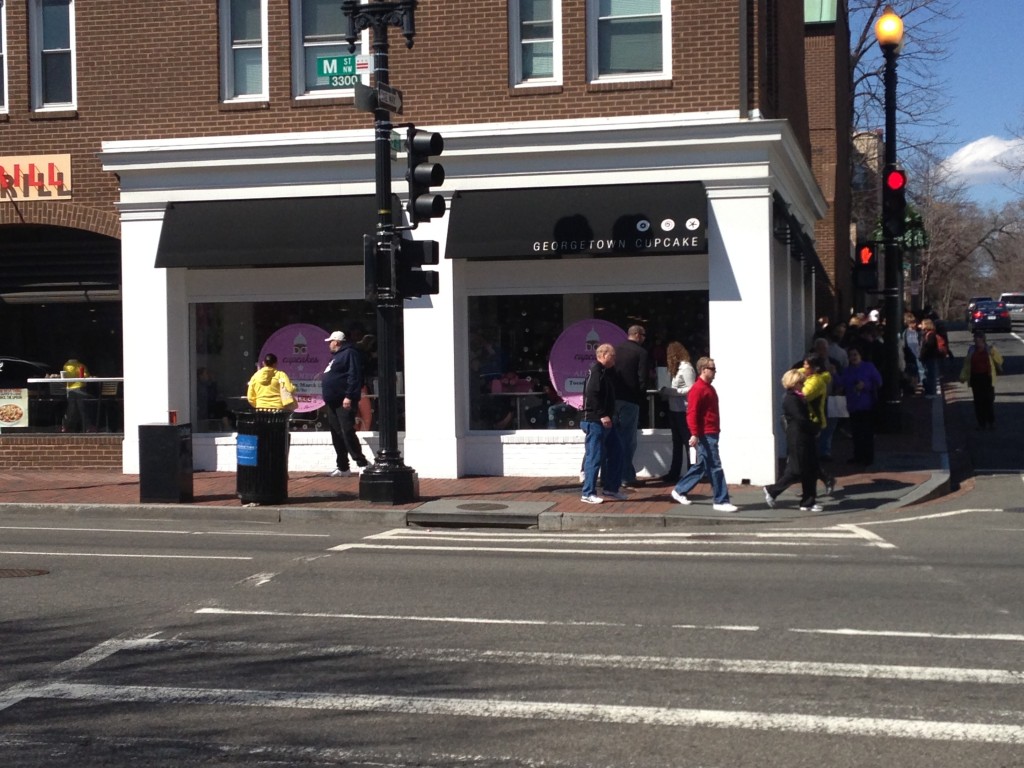 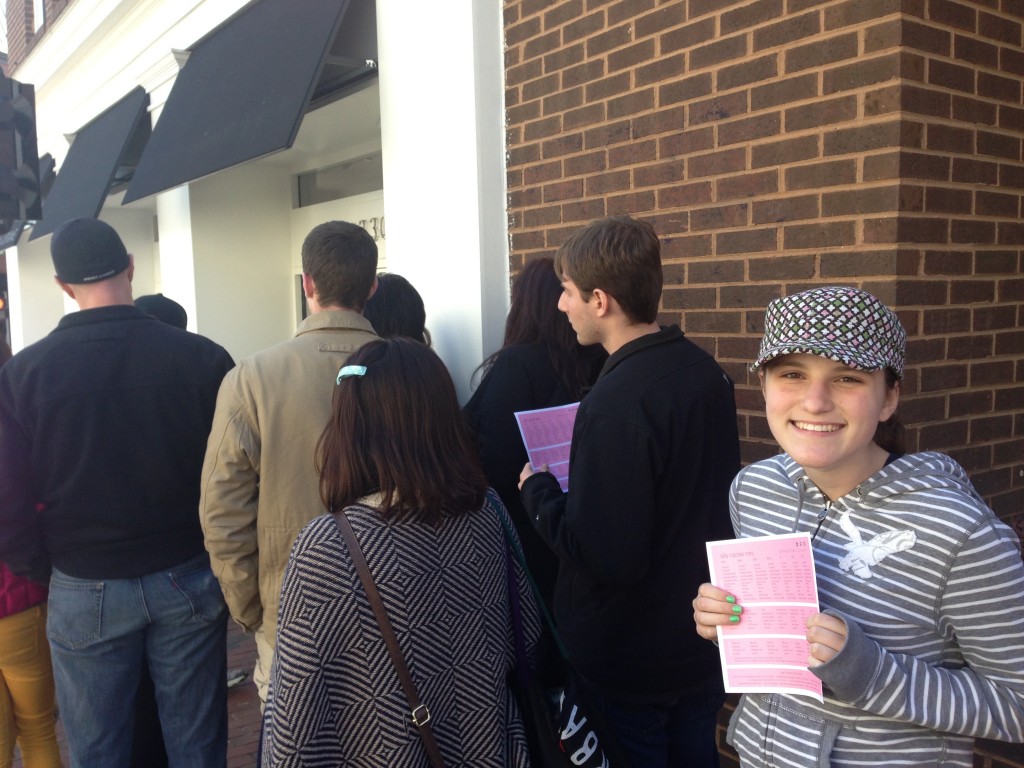 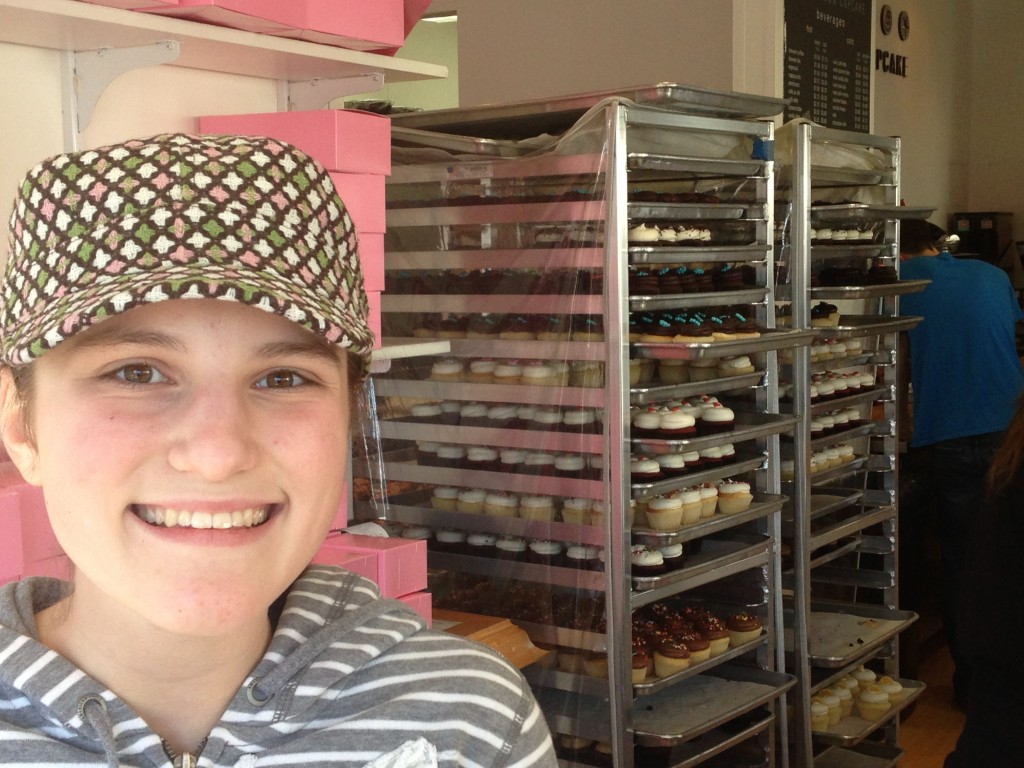 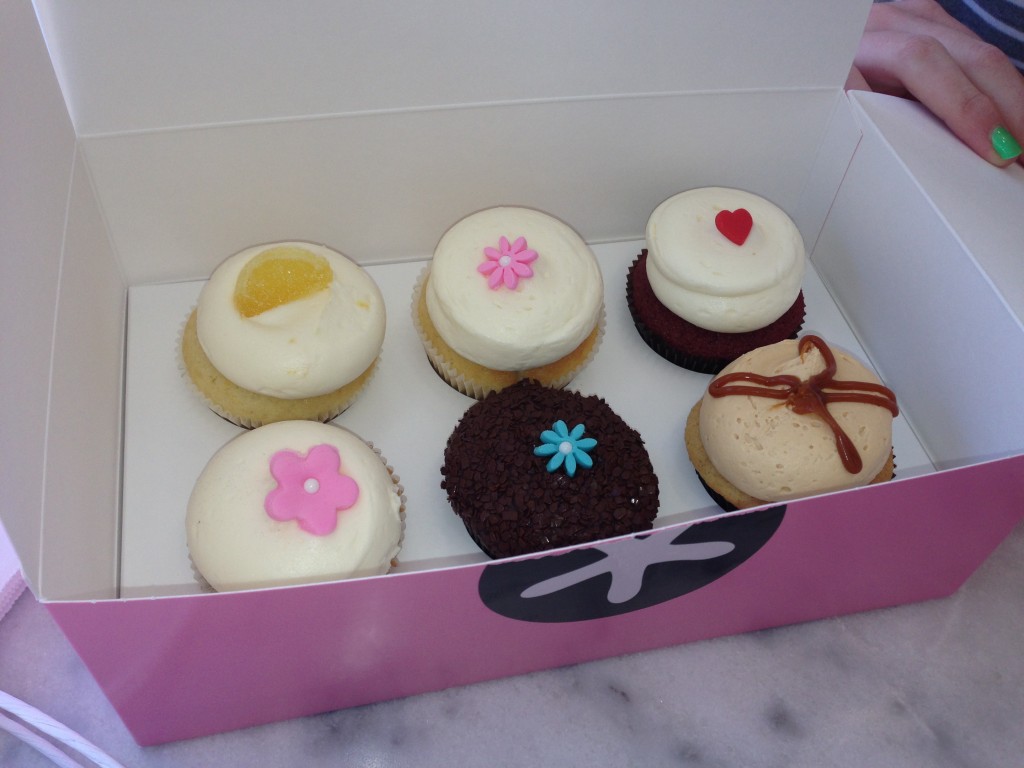 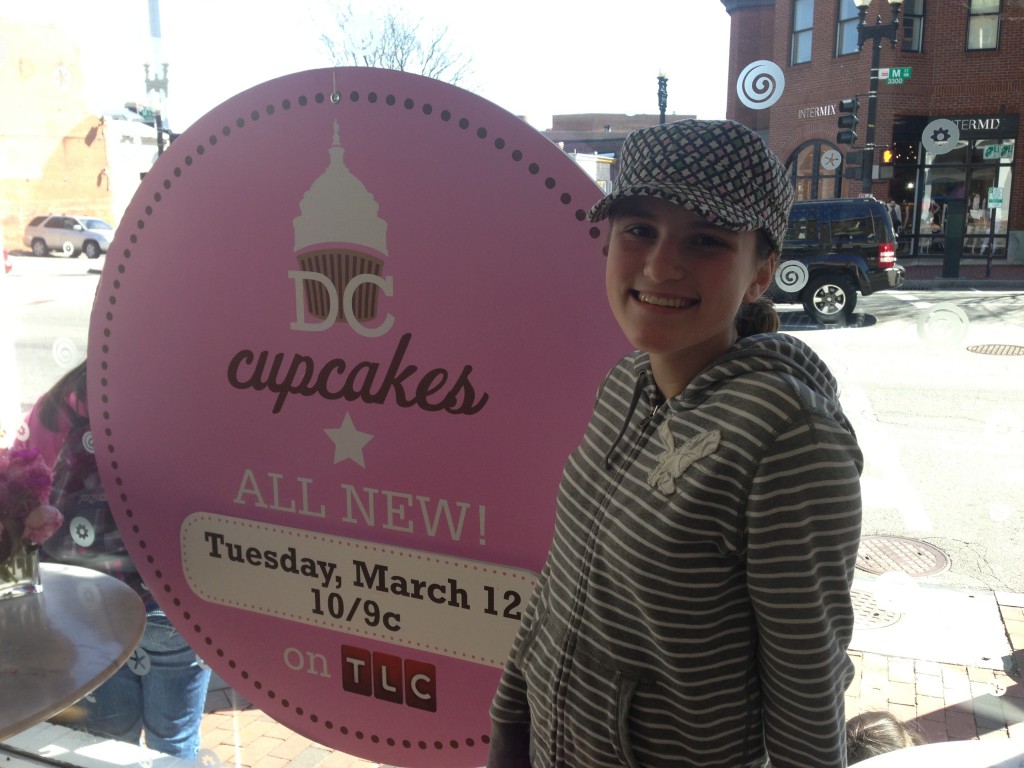 The best part of Georgetown actually came afterward, when we walked and talked and looked at all the beautiful shops along the cobblestoned streets.  I ducked into to Dean and Deluca, drooled for the better part of an hour, and came out twenty-five dollars poorer, the money somehow having been spent on a surprisingly small number of gourmet chocolate bars.  (I figured Dean and Deluca was on the wrapper, it had to be better than chocolate in Kennewick.)  We did some clothes shopping and window shopping and admired all the quaint little buildings that toppled over one another in such a friendly, happy way.  When I stopped to snap a photo, Rachael pulled down hard on my arm and angrily whispered “Mom–stop!  The goal is to look like we live here.”  She’s catching on quick, that one.  But I do not believe we met that goal.  I think my Ross purse and gigantic tour map may have had something to do with it.

Lest we got too comfortable in this alternate reality, we ended the day with a stop at Subway for some Baked Lays and a soda.  We decided that we needed some salt after our cupcake binge, and stopping at Subway in that charming little neighborhood was like leaving a handprint of Eastern Washington on the uppity landscape of Georgetown.  They needed to know that we came, we saw, and–we couldn’t afford it.  Except for the  sixteen-dollar cupcakes.