Last week I discovered something new.  And as with most of my discoveries, I’m about a decade behind in discovering it.  Yes, my faithfuls, that game you all left behind your junior year of college–the Settlers of Catan —has only recently found it’s way into my home and my psyche.  And I’m not very good at it.  And that makes me mad.

It makes me mad that I’m always just one settlement, one city, one Development Card away from winning.  It makes me even madder when my seven-year old son steals my Longest Road card for the win.  And I rage–oh how I rage–when my smug, victorious husband walks away–yet again–with the triumph that should have been mine.  He’s already stolen my youth and beauty; must he steal my Settlers of Catan victory, too? 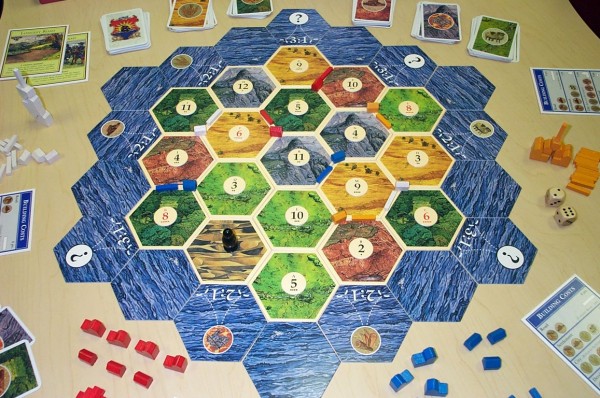 You should know that I am not a competitive person by nature.  I’m a blue-personalitied middle child who could stand to be a bit more competitive, as it would drive me to be a more impressive person.  (I’d be smarter, wealthier, and prettier.)  (And I would have married much better.)  (But that’s a whole ‘nother thing.)  However, when I invest two-plus hours in a board game–two hours that would otherwise be spent sewing, canning, or doing genealogy, no doubt–I want to win.  And I want to win bad.  So when I don’t win, which is pretty much always, I just don’t take it very well.  In the interest of full disclosure, let me define what not “taking it very well” means:

And that’s the mild stuff.  The real sound and fury came a few nights ago when Derrick jilted me out of a mightily deserved win due to an alleged “technical error.”  I felt the “error” (whatev) should have been overlooked, since I was playing for only the second time and my oversight was a common one among new players.  Derrick resolved that should the mistake be excused, my victory would be tainted and thus go unrecognized by him.  The choice was mine:  I could stand my ground and walk away with a win–but no bragging rights–or I could concede his point and continue playing with the possibility of an eventual, “legitimate” win (which my first win was, cheater.)  Either way, my hard-fought, eagerly anticipated victory was spoiled.  And boy was I mad.

my hard-fought, eagerly anticipated victory was spoiled. And boy I was mad.

After a lengthy internal debate, I gave up my (legitimate!) win and we continued playing.  Of course Derrick won two turns later and immediately announced, with all the magnanimity of an adult speaking to a child, that he would “split the win” with me.  It would seem that securing his own victory made him very generous.  I responded to this proffered gift by rehearsing his own favorite line back to him:

“I ain’t splittin’ nothin’.”  This is how Derrick responds every time I ask him to split a dessert with me at a restaurant.  (Derrick does not believe in splitting food.)  (Even with his wife.)  (But that’s a whole ‘nother thing.)

I said: “No.  Take your win.  I hope you feel good about yourself.”

He said:  “We have to play by the rules.  Otherwise winning doesn’t mean anything.”  Oh, so noble. Such a purist.

I said:  “Yeah, but when someone’s still learning a game, we always help explain it the first couple of times.  I just didn’t know I didn’t have any city-blocks left.  You could have let me keep my cards after I realized it.”

He said:  “You should have known.  We talked about it.”

And I marched up the stairs, slamming my slipper-covered feet into the carpet as loudly as I could.  (It wasn’t very loud.)  I shut the bedroom door soundly, as slamming it may have lessened my credibility at this point.  I changed huffily into my Mom Power Suit (snowflake flannel pajamas), washed my face, brushed my teeth, and got into bed.

And I lied in bed for a long, long time, unable to fall asleep.  Because I was mad.

And I heard Derrick get into bed two hours later and I still couldn’t fall asleep.  Because I was mad.

And I heard him snoring softly, no doubt dreaming blissfully about his smarmy win.  And I had to listen to it as I lied next to him, wide awake.  Because I was mad.

And after many hours, my anger gave way to boredom which gave way to fatigue and I finally fell asleep.  And I woke the next morning with just one question on my lips for my husband and children:

“Who wants to play Settlers of Catan with me tonight?”

The kids looked at each other and then back at me with large, silent eyes as my husband walked quietly backward out of the room.  No takers.

That made me mad.

One of my favorite childhood memories consists of grabbing my younger sister by the forearm, holding her hand up at a ninety-degree angle, and slapping said hand across her own face, back and forth, back and forth.  This sisterly gesture was always accompanied by my familiar chant of “Why ya hittin’ yourself, why ya hittin’ yourself?” over-and-over-and-over, in a kinda-but-not-really funny way.  (Funny to the slapper.  The slappee, not so much.)

Hitting.  Punching.  Biting.  Threatening with kitchen knives.  Kicking the crud out of each other.  All administered, of course, against the gloriously unsupervised backdrop of 1980’s parenting.  (Did you grow up in the eighties?  You know what I mean.  Nobody cared what we did back then.  It was awesome.) 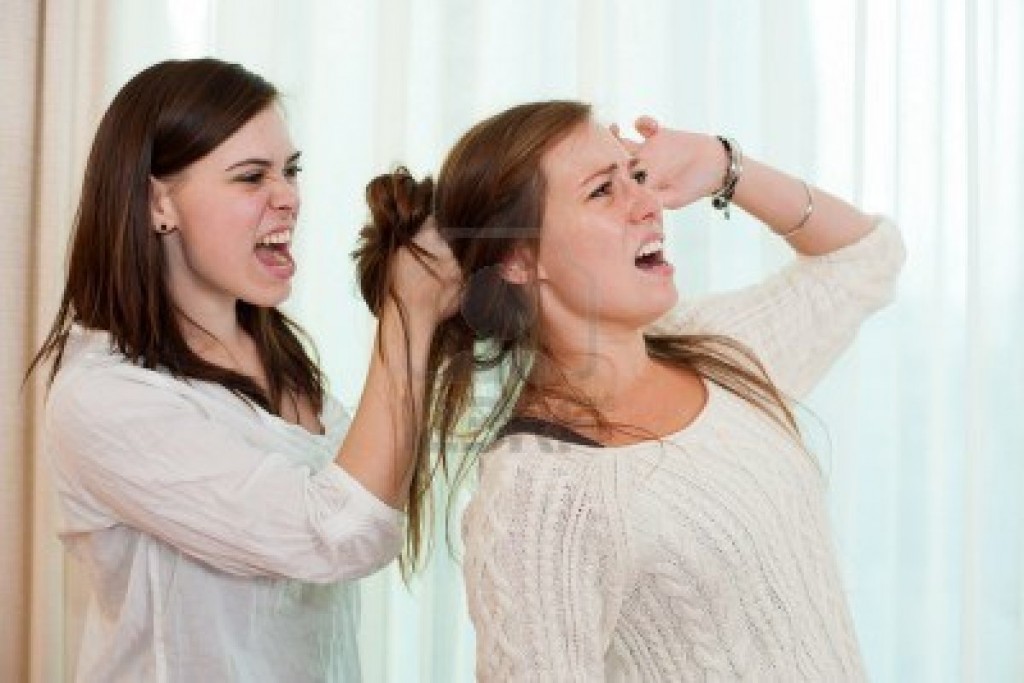 My sister and I are the best of friends nowadays.  I think the deepest familial bonds can only be forged through early and brutal hand-to-hand combat.

I think the deepest familial bonds can only be forged through early and brutal hand-to-hand combat.

Remember that this weekend when you’re ready to kill your kids because they’re trying to kill each other.  Blood may be thicker than water, but bloodthirstiness is the thickest of them all.

Last week I came across an interesting article in Time magazine entitled The Childfree Life: When having it all means not having children.  The cover showed an attractive couple lying on the beach looking happy and relaxed  with no children in sight.  Basically, this couple looked just the opposite of how Derrick and I look when lying on the beach, attractiveness included.  (Part of adulthood is accepting what will never be, and for us, looking attractive while while lying on the beach falls into that category.) 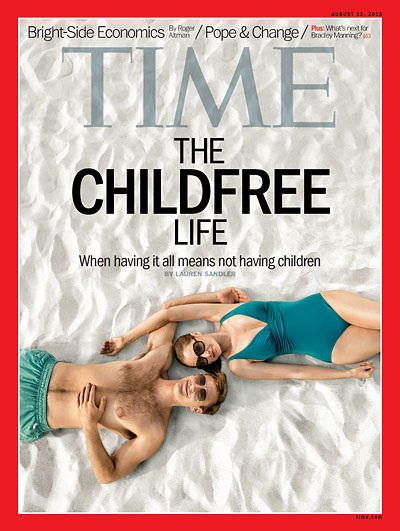 The article explained how the U.S. birthrate is dropping sharply as more and more couples are choosing childlessness as a viable and fulfilling life option.  This didn’t surprise me; we’ve seen that trend growing for decades.  But the writers real point–and the point of the piece–was how happy these people are without children.  Life Is Good, it would seem, for the childless-by-choice.  And this surprised me even less.  Life is easier, calmer, less busy, less stressful, less messy, less annoying, less fattening, less expensive, less guilt-ridden, and less heartbreaking without children?  Tell us parents something we don’t know.

The best two things about Not Having Kids would be:

1)  You wouldn’t have to sell cookie dough with a two thousand percent markup every September to unsuspecting frenemies.

3) You would never have to settle a loud and violent fight over a Pez dispenser in the backseat of the minivan.  And a minivan–you wouldn’t even know what that was.  (Can you imagine?)

The writer of this article makes a solid point:  Kids.  Who needs ’em?

Then again, this writer may have never witnessed conversations like the following, which took place in the backseat of my minivan, between my eight-year-old son, Ethan, and his ten-year old cousin, Tucker:

Tucker:  “Would you rather be a donut, like a big donut, or a donut hole?”

Ethan (without hesitation):  “A donut hole.  That way if someone tried to get me, I could just roll away really fast.”

Tucker:  “Yeah, but if you were a big donut, you could just, like, hit people, like go back and forth and smack against them really hard and get them out of the way.”

Ethan:  “But if I was a donut hole, I’d just roll away from you, or go under you, and I’d get away.  Or if you hit me, like if you were a maple bar, I’d just fly really high into the air and it would be awesome.”

Tucker:  “Yeah.”  This exchange was followed by a long silence as both boys look out the window to ponder the finer points of their discussion.

I think this heady dialogue proves my point:  The case against children is good, but the case for the donut hole is better.