Yesterday my oldest child turned fifteen.  I remember one day, when she was three, standing and talking with a mother of a ten-year old in the hallway at church.  She was citing the ups and down of tweenhood and I clearly recall telling her that my daughter would never, ever be ten years old.  It was too far away to imagine; that picture just would not gel.  But (spoiler alert!) my three-year old did turn ten and then–while I was busy making dinner and returning phone calls–she turned eleven, twelve, thirteen, fourteen and, yesterday, fifteen.  In one long, slow, vanishing blink of an eye.

I tried to slow it all down, honest I did.  I took pictures and kept journals and even attempted scrapbooking (the ultimate maternal sacrifice) in an effort to freeze-frame her rapidly unfolding life.  I took her to the park and carefully sat watching her, determined to “live in the moment,” per the instructions of all those parenting magazines.  I made a fairly big deal out of her blessing and baptism, birthdays and Christmases, school plays and first dances.  I volunteered in her classroom and even did time in the PTA (there’s a tragic story), so determined was I to suck the all the marrow out of motherhood.  I tried desperately to hold on to those moments because everyone told me they’d be fleeting.  I thought (I hoped) that the more pictures I took of, the more involved I got with, the more time I spent on her childhood, the longer it would all last. 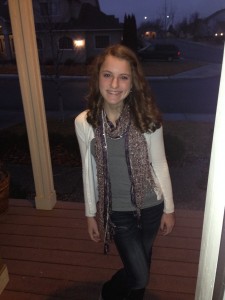 Regardless of what magazines (or friends, life coaches, or our own mothers) tell us, we are absolutely powerless to slow down anything in our lives–up to and especially the raising of our children.  We can try to enjoy the process; we can try to be engaged in the present.  But none of that will change the rate at which one flickering candle on your baby’s cake gives way to a blazing fifteen.

“Slow down!” our own parents tell us (at least, mine do) constantly.  “Parents these days need to just slow down.”  This lecture only increases my stress because now, on top of trying to Do It All, I’m supposed to Do It All More Slowly.  Telling yourself to slow down! is like adding a dollop of guilt on top of the messy dish that is the daily routine of parenting, and it’s hard enough to barely keep up without feeling sheepish that you’re barely keeping up.  I wish people outside this phase of life would stop telling those of us within it to just slow down.  Because when you’re raising a family, you’re usually at the mercy of the clock.  And, despite our list-making and “simplifying,” we cannot slow that clock down any more than we can slow down the rate at which our children grow.

This would be a sad truth to face if it wasn’t such a relief.  What if we could slow things down–for real, like with a Magic Slow Down Wand?  Imagine the damage we could do.  What if, instead of sending your babies off to school with a lump in your throat, you waved your Magic Slow Down Wand and gave yourself toddlers forever?

What if we could slow things down–for real? Imagine the damage we could do.

Or what if, instead of sending my eleven-year old to sixth grade, I waved My Wand and “saved” him from the life of middle school while condemning him to a life of prepubescence?

High school, final exams, dating, driving, drama, disasters?  We’d all love to slow it down; we’d all love to tuck those kiddos right back into preschoolerhood, when our biggest worries were tantrums and tooth decay from too much juice.  We’d want to wave Our Wand and keep them safe at our side, we’d want to just slow it down.  But we can’t–and that’s a brilliant plan, for their sakes and ours.  Because the alternative to life speeding by is life stopping altogether and, nice as it seems, we cannot exist as still images in a Norman Rockwell painting.  (I’d exist in the one with the family sitting around the gigantic turkey, btw.  I’d be the grandma.  Everybody loves The Grandma.)

Life is not static; its scattered and hurried and random and messy, and parenting is the messiest part of all.  So our attempts to create too much order out of it–to slow it all down–will leave us as frustrated as trying to clean the house while our kids still live in it.  We can do the dishes and make the beds–we can take pictures and keep a journal–but we can’t keep the house spotless and we can’t keep our children from growing up.  So let’s stop killing ourselves trying.

We are powerless in the face of time, and that realization can break our hearts or give us comfort, depending on how we see it.  I–the brand-new mother of a fifteen-year-old–have decided to choose comfort.  Because my inability to keep her little relieves me from the burden of trying.  If I can let that pipe dream go, maybe I can get on with enjoying some of the fine things–like her now-braceless smile and recent devotion to Charlotte Bronte–that come with the thrill of her growing up.  And instead of worrying about slowing it down, I can give up, hang on, and enjoy the rush of the ride.

Late Friday night we strolled through downtown Seattle, tired and hungry and eager to dive into whatever monstrously oversized entree The Cheesecake Factory–my daughter’s birthday restaurant of choice–would dish us up on arrival.  Our spirits were high as we took in the shimmery Emerald City scene, my daughter pointing out the countless twinkle lights that covered the trees lining the streets, making the misty northwest night feel bright and safe.  Admiring the sleek but whimsical modernity of our surroundings, I couldn’t help but comment on the magic of Man Over Materials.  So much innovation, I thought contentedly, all conceived by the ever-progressing Human Being to enhance this thing called Life.  Was there nothing we couldn’t do?  No, I told myself, looking up to the skyline, there was nothing we couldn’t–or couldn’t eventually–do.  We were obviously just a killer smart species.  I slowed my pace, lost in these happy thoughts, when It came around the corner and almost knocked me over.

What?  you are asking.  What almost knocked you over?

Let me explain:  “It” is a tool–no, a device;  no, an apparatus–designed to relieve human beings from the suffering of walking.  Have you seen it?  (Or should I say, have you seen “It?”)  Sightings are rare but more frequent in urban areas where, of course, all ingenuity takes root.  “It” was the superdupersecret code name for the Segway before it’s official release; so confident were its makers of the impact it would have on society, they felt the need to

1) keep the fabulousness of the Segway a superdupersecret, and

2) give the Segway a superdupersecret code name, and

3) choose the most hyperbolic, self-important, embarrasingly hopeful superdupersecret code name they could think of:  It.  Kind of like when Michael Jackson named his final tour This is It.  This is what?  Ah-kward.

Referring to this tool/device/apparatus/whatever-the-h-it-is as “It” implied that, like MJs concert, this was the ultimate, singular invention of our time.  This was the one.  Steve Jobs was quoted as saying, before its unveiling, that “It” would change our lives as much as the personal computer did.  Forget all those other chintzy contraptions,  like the internet and the smart phone; this was It.

Sadly, “It” was a spectacular flop.  (“It” was, and it was.)  As of today, the Segway is no more “It” than I am an “It Girl”–and you’ve seen enough of my vacay photos to know that’s not happenin’.  I’m no consumer analyst, but I do have a simple theory on why the Segway didn’t get invited to our 21st Century Cool Gadget Party:

People are accustomed to–and like–walking short distances to reach their destinations.  If they don’t have time to walk, or they don’t want the exercise of a bike,  they will find a faster, easier mode of transportation, like, oh, I don’t know–a car.  The Segway moves too slowly to replace walking, and isn’t  the point of a motorized vehicle to get you there faster?  And until they make special Segway lanes, “It” is too big and clumsy to navigate sidewalks–not to mention too dangerous, looping and coiling carelessly around unsuspecting pedestrians.  (See pp. 1 for my near-death experience.)  On top ofall this rests the real, silent tragedy of the Segway:  you look like an imbecile riding it.  I think this why I’ve never seen a woman on one.  Our gender’s intuitive vanity has provided resistance.

Final analysis?  “It” fills no consumer need and it provides no consumer service–except to get Gob to the banana stand (in which, I’ve heard, there is money.) 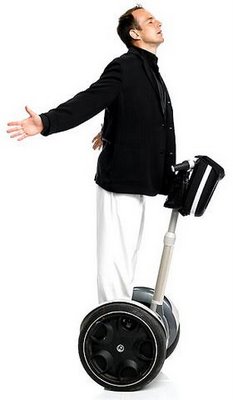 And so my rendezvous with Seattle–that glittering metropolis of progress and technology–was tainted by the reality of really smart people’s really dumb ideas.  Mr. Jobs may have been infatuated with “It” but the American consumer, I’m proud to say, was not.  The clever little walker for people who could already walk didn’t change our world, it simply made it funnier.  Which isn’t such a bad thing, except that it cost some people a lot of money to do it.

Mr. Jobs may have been infatuated with “It” but the American consumer, I’m proud to say, was not.

The real question is this:  who, besides G.O.B. and my downtown assailant, is buying these things?  Someone needs to pull him (always a him!) aside and tell him that

2)  despite our cultural belief otherwise, it’s okay to burn an occasional calorie, and

3) he will never, ever pick up a chick while riding that thing.

We’re off to Seattle this weekend with our twelve-year old daughter in tow.  The trip’s in honor of her, actually–it’s a little tradition we started with our oldest when she turned twelve (almost three years ago!)  We’re excited for a little Pike’s Place, a little Pacific Science Center, a little Space Needle, a little mist and rain.  It’s big time for small-time folks like us. 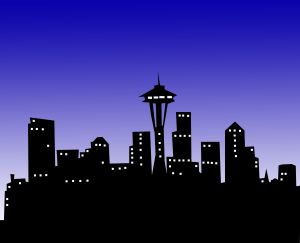 Any great restaurant/sightseeing suggestions would be appreciated–as you can tell from the list above, we haven’t quite broken out of the tourist scene.

(Of course, there’s always IKEA, the WalMart of the West Side.  Overpriced junk posing as minimalistic chic?  For a cheapskate wannabe like me, it doesn’t get much better.)

Of course, there’s always IKEA, the WalMart of the West Side.