I’ve missed you guys!  A nasty bug left me grumpy and groggy this week and, because I am undisciplined, I couldn’t bring myself to the keyboard.  (I also feared what drivel would spill out as a result of my brain fog.  I mean, my last post was about a poorly made bed; I have a reputation to uphold.)   I am slowly coming to, but still find that discussing The 5 Worst Remakes of All Time is the only viable topic option for today.  Anything deeper or longer than this would be irresponsible writing, considering the state of mind I am in.  Even coming up with ten bad remakes proved too taxing on my recent mind ‘o mush (though they’re out there.  oh, they’re out there.)  I am determined by next week to be waxing eloquent about life, love, and the pursuit of the Ross clearance rack (as if all of Ross isn’t a clearance rack?) but in the meantime, here is my offering should you choose to partake.  Happy St. Patty’s!

1.  Charlie and the Chocolate Factory – Need I even comment on how dark, creepy, and un-fun this horrific remake was?  It’s like the producers said, “Let’s take all the whimsy and and childlike wonder out of the original film and replace it with irritating music and unlikeable characters.”  Funny, I thought whimsy and wonder was what made Road Dahl’s book famous in the first place.  And don’t even get me started on how terrible Johnny Depp was in it.  “Disturbing” is too complimentary, because it implies some complexity and intrigue.  Depp was just dark and dumb and utterly un-entertaining.

2.  Parent Trap  Was there ever a better movie for tween girls of yore than Parent Trap?  Sunny, wealthy twins in sunny, wealthy 1950’s California struggling delightfully to bring their fumbling and loveable parents back together again.  This movie captured the summertime of youth–figuratively and literally—like no other, and the dialogue was just cheeky enough to make the whole fairy tale believable.  Maureen O’Hara was the bomb with her vixen eyes and sophisticated, subtle wit.  I watched the remake a few years ago and Dennis Quaid and Natasha Richardson were so polite to each other, you wondered why they ever split up to begin with.  There was no arguing–and thus, no chemistry–between the two of them.  The whole thing was a watered down version of the original; it’s like the writers feared the audience wouldn’t understand that tension between star-crossed lovers is a good thing.  And Lindsey Lohan?  Puh-shaw.  Take me back to Hayley Mills-ville.

3.  Footloose – Confession:  I have not seen the remake of Footloose, but that shouldn’t weaken my credibility here because I’ve avoided it purely on principle.  Remake my beloved Footloose?  Why not just remake Tootsie?  (The day that happens I’m banning the Oscars.)  (They will miss my vote.)  The original Footloose, as any respectable child of the eighties knows, is about a big city boy who moves to a small rural town and determines to get its public dancing ban lifted.  It is such a laughably unrealistic, melodramatic, kids vs. grownups plot that anyone under the age of eighteen was smitten by Frame One.  (I was in the fifth grade when it came out and yes, I fell hard.)  But there was a naivete to that film that could only work in the eighties; the so-dorky-they’re-cool-cowboy duds, the distortedly wicked Establishment, the cliched out-of-touch parents.  And Kevin Bacon’s dancing?  Let’s hear it for the boy. What I’m saying is: you don’t touch movies like Footloose.  It doesn’t matter that the movie was a silly teen flick; it is a national treasure.  (I mean, along with the Constitution and some other stuff.)  So you don’t bring in Ryan Seacrest’s curvy girlfriend to play Ariel—only Lori Singer is scrawny and scrappy enough to play Ariel!  And you can’t pull off the idealism-of-youth-turned-dance-movie today like you could back then; teens today are too savvy for Footloose.  (Unfortunately.  Or is it fortunately?)  In short, you can’t pluck Footloose out of 1984 and plop it down in 2011.  Please, Hollywood, leave us Gen Xers something to call our own.

Now on to a couple of songs that have me troubled:

The Boxer – originally by Simon and Garfunkel, remade by Mumford and Sons.  It pains me to dis on Mumford and Sons, because they have a big fan in me.  I love just about every one of their songs—except The Boxer They actually sing it well and I would probably like it if I hadn’t had some serious spiritual experiences with Simon and Garfunkel as a child.  They were my dad’s favorite duo and we’d listen to their “tapes” over and over again and dangit if by the time I was twelve I didn’t feel some ownership over their work.  I still remember the road trip wherein my dad explained to me what the difference between “the boxer” and “the fighter” was.  It was a revelation on I-84, and I am not kidding.  From that point on, Simon and Garfunkel were mine, and for Mumford and Sons to just kidnap The Boxer without consulting me is a blow from which I have yet to recover.  Being who they are, M & S does a decent job with it—but only if you haven’t heard the original first.  I don’t think anyone should be allowed to chant the “lie la lie” rant who wasn’t yet born in the sixties.

5.  Landslide – originally by Stevie Nicks, remade by the Dixie Chicks.  So grueling is the Dixie Chicks’ interpretation of this song that it pains me to describe it, but move truths forward on this blog I must.  Listening to Stevie Nicks sing Landslide—especially the live version—is like listening to the color silver.  Shimmering and transparent, her voice slides gently down that snow-covered hill.  The Dixie Chicks, on the other hand, hacked up this number with their signature harmonic twang, which may work well in their own music, but simply butchered the smooth flow of this masterpiece.  There’s also something insincere about the way they sing it; I feel like they don’t really understand the lyrics, or at least don’t mean them the way my girl Stevie does.  But perhaps I’m unfairly assigning my distaste for their collective persona onto their music.  (I know it was ages ago, but I saw them in an interview with Diane Sawyer once and I had to half-cover my eyes through the whole thing, I was so embarrassed for them.)  If you have enjoyed this song by the Dixie Chicks, please treat yourself to the original version.  You’ll never go back, promise.

What remakes–of songs, movies, anything–fill your heart with angst?  It’s okay to rant; it’s a Monday, and the celebs can handle it.  Let’s work it out here, together.  Come Tuesday, we’ll be nice.

This morning I told Ethan to make his bed.   And he did. 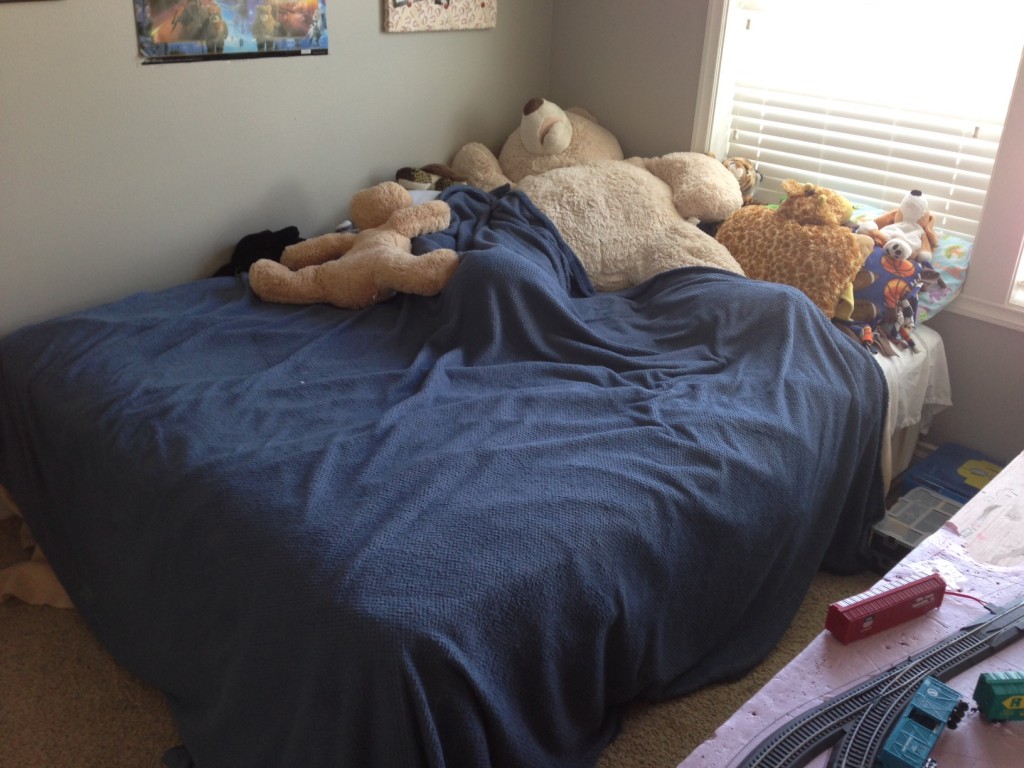 Isn’t it lovely?  All tall and regal and electric.  I even bought it at Costco, which we all know is the forty-plus crowd’s version of The Mall.  I bought one of these last year and–wouldn’t you know it?–one of the kiddos broke it.  (Still no word on which kid.)  By some apparently unseen force, a stubborn yellow #2 pencil found its way down the blade-lined tunnel and, tragically, never found its way back up again.  After much prodding, prying, toil and trial, the pencil eventually broke off at the halfway point, thus canceling all chances for any recovery the poor sharpener may have had.  It was a dark day for me, as that iPoint was much more to me than merely a freaking awesome pencil sharpener.  That iPoint represented a certain socioeconomic status finally achieved in my life, so ardently sought for so many years.  That iPoint was my midlife’s red convertible.  And it had, the sake of this discussion, had its tires slashed.

The kids, somehow, were less affected by the loss.  And why should they have been, since the very next week I went out an bought another one?  Now before you judge me for spoiling my children by immediately replacing a fancy electronic that they themselves broke, you should know two things:

1)  I wanted the new sharpener worse than they did, and

2)  I am extremely wealthy.  Wait, that came out wrong.  Okay, I am extremely well-to-do.  (Reference my shopping at Costco; need I say more?)  Hence, purchasing a replacement sharpener was really no big thang, thankyouverymuch.

3)  I’ve been dying to say thang on this blog for years.  It’s so much funner than thing, isn’t it?

4)  I’ve also been dying to say funner.  I wish someone articulate and credible would finally induct that word into proper English grammar.  (Where’s Matthew McConaughey when you need him?)

So.  Here’s what my second Brand New Freaking Awesome Pencil Sharpener looked like:

You get the idea.  It was the exact same sharpener I’d bought the first time, and–wouldn’t you know it?–within a few months of its arrival, my children murdered it in the exact same way they had murdered the first.  Now, I know I confessed to being wealthy (and I am–oh, I am!), but even a ritzy housewife has to draw the line somewhere.  So I said, “Nuff!”, ran to Walmart, and brought home this: Which, within three weeks, devolved to this: thus rendering itself useless in helping a teary fifteen-year old finish her math homework last Tuesday night.  I was leaving the house to run something to a friend’s house when she stepped in front of me, filling the doorway with the anemic apparatus cupped in both hands.  She held it out to me as gently as if she were offering me a palmful of rose petals.  Or a hand grenade.

“Mom, look.” she announced timidly.  (She was aware of this subject’s dark history.)  I looked, and I sighed.

“I don’t know–I don’t know!  I went to get it out of the cupboard and it was all broken!”

“You’re kidding.”  I was holding it together, you see.  She shook her head silently.

“Well, can you still sharpen the pencil in it?”

“No.”  Long pause, hard swallow.  I had a moment here, I knew, in which I could choose my reaction.  As a mother, as an adult; my emotions are a choice.  And so naturally, I chose to say (yell):

“Well, if YOU KIDS can’t keep the most BASIC PENCIL SHARPENER working for more than a week, I don’t even know WHAT to say to you!  You obviously don’t need it that badly, or else you would take care of it!  I’ve probably spent a HUNDRED DOLLARS on pencil sharpeners this year! And we STILL don’t have one that works!  What is WRONG with you people?!”  And with that, I swooped out the front door, closing it calmly but decidedly behind me.  (It was a beautifully dramatic exit, if I do say so myself.)

The good news is that I made up with my daughter as soon as I came home.  Because upon entering my dear friend’s house and relating our family’s troubles, what did she have to offer me but this? I’ll give ya a new pencil sharpener.