It was 1985.  I was twelve years old and dripping with the anticipation of attending my first real dance.  Our church’s youth group, which hosted weekly dances for teens aged fourteen to eighteen, had given a rare invitation to the twelve- and thirteen-year olds to join in the fun for one night.  One magical, moonlit night—I envisioned it spent twirling in the arms of a high school guy (not boy) draped in an oversized poly-knit sweater and a hefty dose of Drakkar.  Oh, the thrill of it all!

Sure, the dance was being held on a Wednesday from 7-8:30 pm.  Sure, it was taking place in a small, linoleum lined room just off the church kitchen, which would be well-lit and swarming with watchful adults.  Sure, a ghetto-blaster (can I still call it that?) would be passed off as the DJ.  No matter.  I saw this initiation into the world my older brother and sister had long inhabited as a turning point in my desperately linear march from tween to teen.  Along with my first real bra and the sky-blue stirrup pants my mom had sewn me, dancing with high schoolers was, in my mind, a rite of prepubescent passage from which there was no undoing.

Sure, they were just the boys from my church.  Sure, I’d seen most of them in their Boy Scout shirts on Wednesday nights, complete with neckerchief and slider belt.  Sure, most of them weighed less than I did.  No matter.  Regardless of who was wearing it, I was determined to brush my cheek against someone’s (anyone’s) poly-knit sweater and take a deep sniff of the masculinity-in-a-bottle that was Drakkar.  Of the numerous things about boys that enchant young girls, nothing compares to the kryptonite of cologne; it is a knee-weakening agent of the most intoxicating order.  We’d have gotten drunk off it, had we been allowed to get drunk.  And it was this very rapture over all things eau de toilette that got me into trouble that night.

See, when it came to my sixth-grade love life, I’d always tried to put myself into the other person’s shoes, treating them as I would want to be treated.  Like the time I got my crush a big, purple ribboned basket full of pretty treats (I know I would have loved it), or when I called my (other) crush several times each day, certain he would enjoy the attention as much as I would have, had he called me as often.  (He hadn’t.  Shocker.)  And the fact that this do-unto-others approach hadn’t born the exact fruit I’d hoped for didn’t deter me now; I was determined to apply the same logic to My Big Night.  I reasoned that if I enjoyed smelling cologne on my dance partner, he would surely enjoy smelling perfume on me.  And if a little perfume was good, a lot was better.  A lot.

So early Wednesday evening, after my algebra was done, my perm Aqua-Netted and my lips Bonne Belled, I performed the final, crowning hose-down:  an ample supply of Love’s Baby Soft.  This, my friends, was the perfume of the ages; it smelled heavily of baby powder with a kind of synthetic-floralish undertone, and it was enough to make boys beg you to Bear Hug.  (Even though we weren’t allowed to bear hug in the church.  But a girl could dream.)  I had received a pink encased Value Pak of Baby Soft for Christmas that year with perfume on one side, talcum powder on the other.  The perfume was a bubble gum pink color that showed through a clear plastic bottle with red hearts painted on it.  It was divine, and I couldn’t wait to seduce my first hapless suitor.

I generously covered my pre-dressed body, post-dressed body, clothes (yes) and hair with the diaper/flower scent, followed by an extra application to the pressure points I’d read about in Seventeen:  wrist pulse, neck pulse, interior of elbows, behind the ears and, of course, behind the knees.  (Who knew where the evening might lead?)  Let the games, I thought, as I sprayed and powdered and puffed, begin.

After a final mirror check/pulse-point sniff, I grabbed my lavender leatherette purse and bounced out to the Buick where my sixteen-year old brother and fourteen-year old sister waited for me.  I hopped in the back, wisely foregoing my standard “shotgun!” as I knew my mere admission into this vehicle was, tonight, a fragile privilege.  I sat down, slammed the door excitedly, and settled in the backseat as we pulled out of the driveway.  We had gone all of one block when my normally easygoing brother turned around in a sudden, inexplicable fury.

“Holy crap!  How much perfume are you wearing?”

“Um…what?  Not that much…”  My voice was small.  He was still glaring at me over the seat but I doggedly avoided eye contact.

“YOU REEK TO HIGH HEAVEN!”  Such words from big brother!  He groaned loudly and rolled down the window.  “Roll yours down too.”  (This was pre-auto windows.)  “I can hardly breathe!  What are you thinking?”

I was silent.  And then, with the raging hormones of a sixteen-year old boy trapped in his dad’s car, driving his two little sisters to a church dance, he dealt the final blow:

“If I was a guy dancing with you, I’d turn around and leave so fast…”

That was all it took.  Though I still refused to dignify him with a response, the minute I entered the church I ran to the ladies room and spent the first two (slow!) songs trying desperately to undo what I’d done.  I ran a paper towel under the faucet, wrung it out, and scrubbed every exposed pulse point. (The backs of my knees, swathed in the sky-blue stirrups, were unavailable.)  I even lathered some hand soap on my wet palms and attempted a mini sponge bath, but to no avail.  Turned out that getting perfume off one’s skin was much trickier than getting it on.

But I am proud to say that that same twelve-year old skin–now stinking of both Baby Soft and wet paper towel–remained admirably thick.  Hmph.  I wasn’t about to let my bossy older brother bring me down.  After all, what did he know about boys that Seventeen couldn’t teach me?

Before leaving the bathroom I took a deep breath, did a final pulse-point sniff (I settled on potent-but-irresistible) and marched my stirrupped legs right past the kitchen into the “dance hall.”  Bright lights, Careless Whisper, and numerous guys in sweaters greeted me.  This was my night, and I was gonna own it.  I scanned the scene, spotted a conspicuously attractive cable-knit, and locked in on my prey.  Following the inebriating scent of Drakkar, I could only wonder at my brother’s uncharacteristic outburst in the car.  Poor guy.  What did he know about love?  Because, really:

who wouldn’t want to get with this? 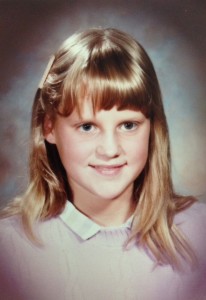 p.s.  I had lavender corduroys to go with that lavender sweater vest, both of which I insisted on wearing the first day of school, even though it was ninety-seven degrees out.