Last Saturday morning found me in my standard mode of listening to a podcast while scrubbing down the bathroom.  Although I was in beast-mode cleaning (as my son would say), I paused mid-Windex spray when I heard a friendly woman’s voice advertising a new “religious recovery” hotline that was recently made available to the suffering and deluded American public.

The concept is simple:  like a suicide or addiction recovery hotline, trained staff wait by the phones to help a doubtful believer in their moment of crisis.  What makes this hotline unique, however, is that instead of trying to talk the hurting caller out of destructive behavior (like a gun or a drink), the staff here try talk a caller into destructive behavior, like giving up on any religious belief whatsoever.  The end goal of each conversation, said the chipper promoter, was to help callers leave religion behind without the judgment or guilt that evolving disbelievers often encounter on their road to “recovery.”  When the show’s host argued that if nothing else, religion gave people an outlet for compassionate service, the woman replied that nothing could be more compassionate than helping someone find their way out of organized religion.

With all due respect (and by that, I mean with no respect whatsoever) I disagree.  I think the most compassionate thing you can do for a person is help them find their way into organized religion, because I think organized religion (with a few fragmented and fundamentalist exceptions) makes people—and people’s lives—better.

1.  Religion requires belief in its doctrine.

We can dance around the deeper issues of life with nothing but our benevolent “spirituality” leading us and land in Happy Neutral Territory every time.  It’s a pleasant place; lots of company and little criticism.  But without religious doctrine—specific, non-negotionable teachings and expectations—our spirituality has no place to live and breathe.  It’s a book without binding, a heart without a spine.  Without religious doctrine and practice, our spirituality lies dormant as a lovely and passive idea.

The most toxic assumption made by our popular culture is that religion is somehow for the small-minded.  As usual, they’ve got it all backwards.  To even consider considering a belief system–reading and dissecting it’s doctrine, then thinking and praying about that doctrine’s truthfulness—requires the best and most of what our scrappy mortal brains can do.  When else do we find ourselves wide awake at 3 am, sweating in our sheets and staring out the window, trying to make sense of who we are and why we’re here?  When was the last time a piece of literature or a differential equation put you in that state?  Understanding religious doctrine—and understanding what it means for us personally—requires a whopping energy of thought, reason, and care.  The light-minded need not apply.

So intellectually grinding is this quest for religious understanding that many of us would rather skip it altogether (as is encouraged by our friendly hotline.)  Life would go on and it might even be easier.  But religion was never meant to be easy; that’s kind of the whole point.  So unlike the cynics claim, the narrow path of religious conviction—which is very different from the broader path of “spirituality”—is taken only by the strong, the thoughtful, the curious.  And the first step is confronting religious doctrine.

Religious life has been on the decline in the West for decades, and I can’t quite believe that it’s all due to theological skepticism.  Religion is hard.  And it living it, harder. 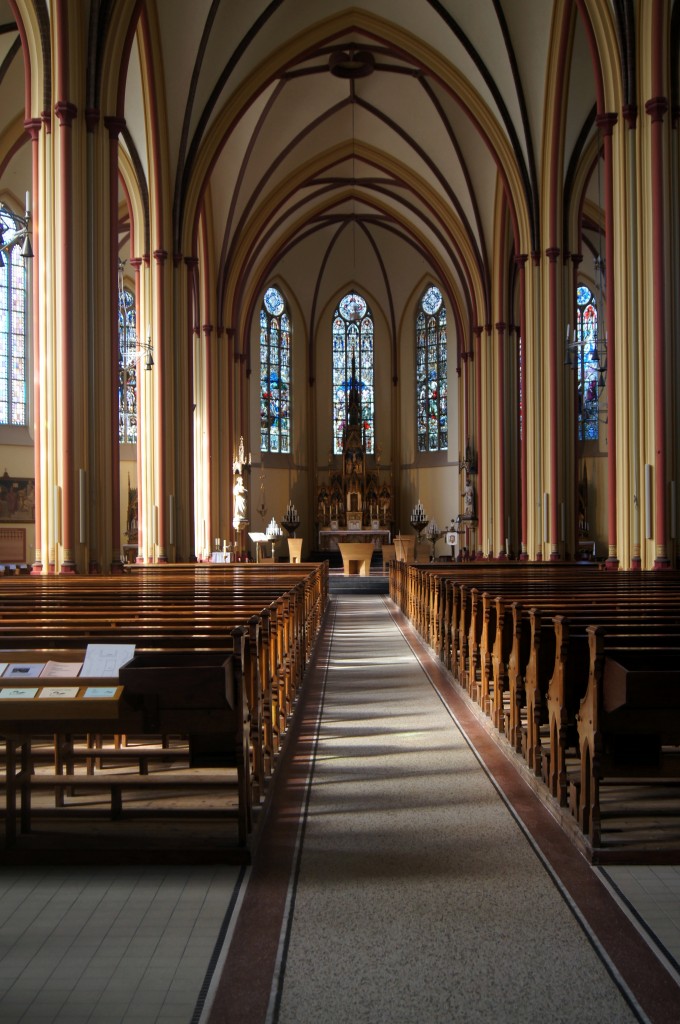 But what religion asks us to do pales in comparison with what it asks us not to do.  Depending on our domination, we may be asked to refrain from:  smoking, drinking, eating certain foods, gambling, premarital sex, adultery, racy books, racy tv, racy movies, racy internet, racy clothing, racy language, racy cars.  (Wait.  I think racy cars are ok.)

And these thou-shalt-nots of the body are nothing compared to those of the heart:  greed, lust, envy, pride, self-centeredness, short-sightedness, materialism, narcissism, cynicism, and a whole lotta other -isms—all are forbidden, or at the very least discouraged, by the Mean ‘ol Grouch of Religion.  No wonder so many people ignore him.

Yes, religion is hard.  But isn’t everything that matters?

That’s the question that struck—and worried—me mid-Windex spray.  Honest doubt is one thing, the path of least resistance another.  And I have to wonder:  could our society’s spiraling disdain for any kind of restraint—food, sex, money—be hijacking our willingness to sacrifice for faith, too?  Is our current religious anemia due to enlightenment, or apathy?

Whoever said “religion is the opium of the people” must have been smoking some of his own.  Far from cocooning us in a misty haze that dreams of Life Beyond, organized religion gets you off the transcendental couch and into the real world of change.  We take a hard look at ourselves in unflattering light, and it hurts.   But it also makes us grow—which is what we religious types are all about.

Not a person alive can (honestly) say of themselves, “Yep, all done here.  No further improvements needed.”  Instinct tells us we should always be changing for good, but religion gives us the reasons to do it.  (There’s gotta be reasons.  Or else why bother?)  Religion is the original blueprint for positive change.  A religious person believes that by their very human nature they are deeply loved and deeply flawed, and that mortal life is the means to change into something better.  This is comforting and terrifying; the love part is great (think spirituality) but the change part is scary (enter:  religion.)  And so the hotline’s message rings glorious to our slothful and anxious ears:  you’re all done here, no improvements needed.  But we know that many improvements are needed, and our religious nature feels its way to those dark places where human nature is scared to go.

Yes, change hurts.  But doesn’t everything that matters?

So there you have it, my three big loud cheers for organized religion.  I did leave out one major benefit, though, which is the sense of community religious life provides.  I skipped it because, though our church families mean a great deal to us, they’re not enough to keep us committed to our faith.  If social support is why we attend church (as some critics suggest), then we’re as well off joining a country club or knitting circle.  Lots of worthwhile venues can provide us with a sense of family, and we are grateful for them.  But let’s not confuse dipping our toes in the waters of civic life with the sacrifice and change required for a religious life.  Which is, in my opinion, the good life.

Whoever said “religion is the opium of the people” must have been smoking some of his own.

1.  I don’t understand WordPress and likely never will.

2.  My niece asked me to take a selfie for her family tree project, and after my fifth attempt I was forced to accept:  this is what I really look like.

3.  I heard a radio ad for a “hotline” available to callers who were thinking of leaving their religion, whatever that may be.  The hotline staff, they assured us, had been trained to help the callers not by calming their doubts, but by helping them simply find their way out—of any and all belief whatsoever.  The selling point, apparently, was that this “recovery” would be offered with no judgment, no guilt, no problem.  (Because really:  why do it to yourself, man?)

These three unrelated disasters gathered like the perfect storm on Saturday night to whip me into a frumpy, wrinkled, computer-illiterate dum dum who had just won a front-row seat to the End of Days.  (And I won’t lie:  #2 made me feel the worst.)  By nine o’ clock, I announced to my husband that I was in an official and exhaustive Bad Mood.  (I think I saw him flinch when I said it.  He’s seen my Bad Moods.)  So here’s how I worked it all out:

First, I had a little breakdown in front of the Hub and he gently reminded me that few bloggers are fluent in WordPress; most of them hire professional programmers (or a darling hub, if they’re lucky) to help them out.  This made me feel a little better, if no less stupid.

Second, I had a little breakdown in front of my camera, and I gently reminded myself that it was the tail end of winter, not to mention the tail end of a housecleaning/yardwork day, hence the greasy face and hair.  I also reminded myself that the indoor lighting was terrible (just go with it) and that I was still in the hopeful process of losing the winter six (seven) pounds, hence the wrinkled and frumpy.  This made me feel a little better, if no less wrinkled and frumpy.

Finally, I had a little breakdown in my heart, thinking about our culture’s confused determination to build a little faith into Our Great And Important Lives instead of building our little lives around Our Great And Important Faith.  And I gently reminded myself that the only way I could make sense of this problem—or any other—was to write about it.  And so I did.  Which made me feel a little better, if no less disheartened.

But more on that tomorrow.

Today, I’m feeling better.  Because today is Sunday, and it’s my favorite day of the week.  Today I get to put dinner in the crock pot and go to church with my family and soak up the silent, satisfied warmth of being not only where I should be, but where I want to be.  Today I get to go home with my family and talk and eat and laugh and turn from our little thoughts of the week to the big ideas of today.  And isn’t that what Sundays are all about?

Today is a new day, and I’m thankful to be in it.

And thankful there was no one at the other end of the line to talk me out of it.