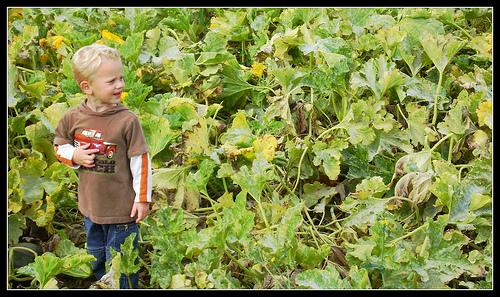 There was the perusing, the choosing, and then… There were the pumpkins! There was a Glamour Witch and an Indian Princess There was a very convincing Spiderman, who refused to pose for any more pictures after his annoying mother took seventy-five of them at his pre-school party.
(To the left is Spidey’s new best friend, Mr. Incredible.  Mom’s decided she needs to pony up the cash and  hook poor Ethan up with some muscles next year.) There again was  Spiderman, defying his desperate mother’s plea to pose with the girls.  “NO!  I don’t like pictures!!” was his mantra of the evening.  Hence, Mom has not a single photo of all the children together.  (The humanity!)  He is fully potty-trained, by the way, so rest assured he is not doing what it looks like he’s doing here. There was a visit from Grandma and Grandpa the weekend before,which kicked the spooky season off to a happy start for the kids, and made Dad happy as he relegated pumpkin carving to Grandpa Neal.

There was a swingin’ party at Aunt Julie’s, followed by a  Trunk or Treat at the church, followed by a Costume Parade on the stage, followed by Trick or Treating in a friendly, cheery, Halloween-conducive neighborhood.  And, most importantly, there was Sixty-Five Degree Weather all evening, which made Mom euphoric, the children energetic, and our Halloween the happiest one we can remember in many years.
Oh yeah.  And there was Candy.  Mountains of candy.  And parents who were too tired to say no.


Every child’s Hallowdream.
(And a dreamy Halloween to you all!)