Have any of you seen this movie? If you have: I’m sorry. If you haven’t: do NOT be duped by this steamy photo. Run…run far, far away from anywhere it can be found or anyone who tells you to watch it. I will refrain from further analysis here (read: Derrick made me delete what I’d originally written because he said some of you may have liked it, and I was being too rude.) Let’s just say that, besides terribly good-looking actors, the only worthwhile thing to come out of this movie is the title, which describes how quickly the last month of summer has come upon us. (I know this is a stretch, but I needed a clever title for my post.) In my grand tradition of shove-it-all-into-one-fat-post blogging, I now offer a randomly ordered recap of some of July’s activities: He did it! The stallion on the mountain.
I got to meet him at the dishonestly titled “Paradise Lodge” (think panel siding, no t.v., and unsettling smell of the great outdoors) when he came down off the mountain, and joined him for a group dinner and program afterward. He received an award for summitting from none other than Dave Hahn, who holds the world record for climbing Mt. Everest the most times. (Can you believe we run in such circles?) It was fun to peek into Derrick’s alternate universe; he is in fabulous shape and breezed through it all. I am such the proud wife! Read more about his Mt. Rainier climb here, if you’d like. Visiting the Portland Children’s Museum on our way to Seaside. Have any of you been here with your kids? If not, get here! It’s so much fun. Derrick was with us, but for once had the camera. Whenever I see pics of myself, I am reminded why I am always willing to be the photographer, not the subject. Riding the supercool “train” in downtown Seaside. This is one of many pics I took on our Seaside trip, but out of courtesy to the reader, I will spare you the ninety-some beach/carousel/ice cream/boardwalk photos of my children that I take each time we go, except for this one: 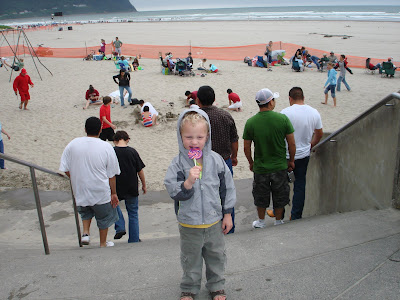 It’s just too cute.
We had fun, and celebrated the Fourth of July down on the shore, if by “celebrating” I mean freezing on a windy beach while my sweet, naive husband tried to put on a fireworks show with a $19.95 box of fireworks. We all cheered and clapped, but it was like watching a limping puppy trying to fetch a ball. (You really do get what you pay for.) He saved the longest, thickest firework, labeled “Tower of Power” for the final act, it surely being the fiery climax of the entire extravaganza. You can imagine the look on his face, then, when he opened it only to unroll a large poster of a black cat on a yellow background, with the words “Tower of Power” in thick black letters above. We are still unsure of what this poster meant or why it was there (some kind of sinister practical joke put on by the Forest Service?) but it was a grand finale that truly befitted its show. Rachael then burned her foot on a sparkler, making this the second year in a row that our patriotic escapades at the beach have resulted in personal injury. In spite of all this, I do still love my country. The only thing Megan wanted for her seventh birthday was a snorkeling kit. If only these inexpensive requests would last… Ethan’s summer (and fall, winter and spring) diet. Parts is parts, I guess. 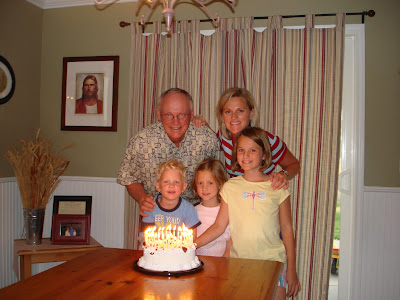 Celebrating my 35th birthday with the family and, more importantly, a Limited Edition Girl Scout Thin Mint Ice Cream Cake from Dairy Queen. Forget what I said about Chukars; this was the bomb! Most of the fam was out of town, so my dad joined us for dinner and cake (again, Derrick took the photo here.) I received a beautiful watch from Derrick, various pieces of artwork from the girls, and this homemade pinata from Rachael: 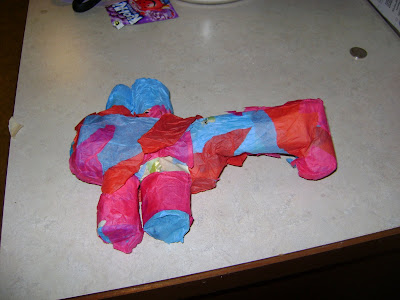 She spent hours in her bedroom working on it in secret, then filled it with my favorite candy. As soon as she gave it to me she begged me to break it, but I couldn’t bear the thought of smashing her handiwork so we kept it for a week before the big bashing. Whoppers still pack a tasty crunch after being trapped in toilet paper rolls and tissue paper for a week! 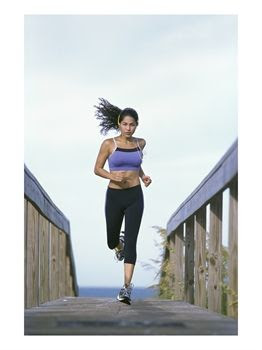 I’ve been doing quite a bit of running this month and thought I’d post about it, but it’s hard to take a snapshot of yourself while pounding the pavement. So I found a photo that looks almost exactly the way I look when I run. Different hair color, of course…

July also boasted an exciting visit from Riley (to my kids, she has one name, like Madonna). This was followed by an insanely fun Christensen Family Reunion near–not in—Sun Valley, Idaho (read: we were in the middle of nowhere, in a place affectionately nicknamed the “Armpit of Idaho,” with no Demi Moore sightings anywhere). I was having too much fun during this trip to take any decent pictures. Sometimes you gotta live in the moment instead of “capturing” it!

And now, in the interest of full disclosure, I feel that I should inform you of a couple of vices I’ve acquired this month: 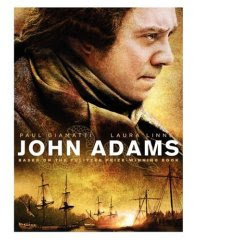 Clear your schedule, rent it, put your kids to bed, watch it. Now.

You read that right. We cancelled our extended cable (but not our DVR) because we weren’t using it much, but now find that there is absolutely nothing on t.v. when we do want to veg. We came across an old Cosby rerun one day and enjoyed it immensely with the kids. It occurred to us later that nothing was stopping us from recording each episode (two per day!) and watching it late at night, or in the afternoon with kids, or while doing laundry…you get the picture. As the summer wears on, Claire and Cliff are becoming part of the family. One night after a mini-Cosbython, I turned off the t.v. and sighed. “I want to be a Huxtable,” I announced. “I want to live in their world.” Derrick was quiet for a moment, then replied in all seriousness: “Well, they probably have a housekeeper.” This was said in the same way you say “That-perfect-lds-family-down-the-street-must-have-a-housekeeper.” Because, you know, the Huxtables are real. We thought about it for awhile. “Yeah,” I conceded. “They probably do have a housekeeper.” We both felt better knowing that the Huxtables must have some help in running things so smoothly. We know we have a problem. I dare any of you to watch it and not get hooked.

After a busy month, we are now enjoying some easy time at home with swimming, tennis lessons, the Wii, puzzles, the park, and that rascal Elvin’s chauvenistic tendencies. We’re looking forward to the girls spending an entire week at Grandma’s alone (!) and our annual camping trip with the Shorts, which will surely be the highlight of an already fantastic summer. I bought school supplies today with mixed feelings. I have loved spending so much time with my kids this summer. Gratitude overwhelms!