Monday morning came and with it, an early spring sunshine that spilled through my blinds and across my warm bed, making it easy to hop out of it for a sunrise walk with the Hub.  Afterward my fitbit registered about five thousand steps—a decent warmup.  But it was only after getting the kids to school and the hub to work that I truly faced my rendezvous with destiny.  Leaving the dirty dishes, dirty laundry, and unmade beds that usually claim my first hours of a weekday morning, I instead put on my running gear, synced up Pandora, and ran (quite literally) out the front door.

I ran hard and I ran long, knowing that every step counted.  After my initial burst of energy I fell into a steady pace that beat it time with the cadence in my head:  must beat Ian…must beat Ian… Each heavy breath—inandout, inandout—was accompanied by a vague, mirage-like image of Ian walking on his treadmill, clicking his mouse and turning a profit while I sweated like a banshee through stop lights and construction zones.  (Not a single worker even looked, let alone whistled at me.) No matter, I told myself.  My recent spasms of exercise were not about looking hot, they were about getting steps.  (Once the Workweek Hustle was over, I could go back to looking hot.  You know.)

This determination saw me through ten miles, or about 26,000 steps, of running.  Along with my morning and evening walk with the Hub, I clocked in right around 33, 600 steps for the day—enough, I felt certain, to secure my victory, at least for Monday.  But—wouldn’t you know it?—by ten 0’clock that night Mr. Treadmill had caught up.  Slowly, steadily, but surely, his miles on the treadmill matched mine on the street.  We were neck and neck, step and step, and stayed that way all week.

Every day, for the next four days, I hammered out a similar schedule:  two mile walk in the morning, ten-mile run mid-morning, five mile walk at night.  I would see the steps load up on my dashboard—whose the gladiator now?—only to watch my opponent’s rise along with them by day’s end.  What, I thought, does a girl have to do?  I couldn’t run anymore than I was; by Thursday morning, when I huffed out a slow nine miles, my legs felt like wood.  No, wood is too light.  They felt like lead.  No, lead is too heavy.  Truth was, I couldn’t feel my legs at all.  And yet somehow they still hurt.

I had to wonder:  how was my nemesis faring?  I didn’t know, because somewhere in the cosmic rules of the fitbit universe, it was written that we would neither see nor talk to one another while engaging in this  competition.  Besides the occasional taunt on the dashboard, it was simply understood:  we had our game face on.  The closest we came to speaking that week was when my husband called his wife as “a concerned spouse” (his words.)  He left her a voicemail—we need to put a stop to this, they’re going to hurt themselves—but she never called him back.  I think she was out for blood, too.

The friends in this showdown were long gone, frenemies a sugary notion of yesterweek.  Now there was only The Enemy, and my insatiable need to destroy him. Which is why, when I opened my eyes on Friday morning—aching back, numb legs, feet throbbing with the impact of sixty miles in the last four days—I knew it was time to get serious.

But even as my physical person deteriorated, my spirit seemed to soar.  I was a fighter, I was a warrior, I was a champion!  I was Jesse Owens, I was Bruce Jenner (pre sex-change–or was it post?), I was Rocky Balboa!  Along with Nelson Mandela, I thanked whatever gods may be for my unconquerable soul!  (Mandela was another of my peeps.)  I was, as my son would say, in BEAST MODE. 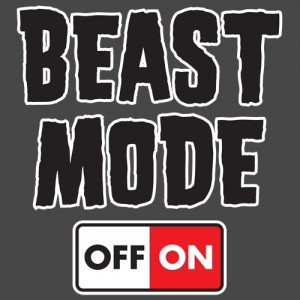 And so it was, with the eye of the tiger and the heart of a hero (or an opportunistic and troubled has-been, take your pick), I rose from my bed, put one foot in front of the other, and walked five miles that morning.  Then ran ten miles that afternoon.  Then walked another three that night.

Well, forgive me if I didn’t believe him.

I had until midnight, and I would use it to walk five more miles with the Hub.  The dashboard showed I was ahead, but who’s to say Ian hadn’t turned off his bluetooth only to load up a gazillion steps just before bed, pulling the same crap he’d pulled last week?  I couldn’t risk it.  Had to press on.  Had to press on.

I fell on my porch as my dog licked me desperately and my husband’s fingeres hovered over 911 on his keypad.  I waved them both off, muttering words they could not hear, shedding tears they could not understand.

I looked up and beyond him—at the glittering night sky, the celestial bodies pulling my tired limbs into their ethereal embrace—and could only shake my head.  Mandela was channeling me, and I answered him with a ragged, triumphant whisper.

“I am the master of my fate…I am the captain of my soul.”

“I am the master of my fate…I am the captain of my soul!”  My voice was parched and pasty, useless against the distracted ignorance of a non-competitor.  I shook my head and rocked back and forth, teeth chattering and head twitching.  I had won.  I had won.

“Jen?  What are you talking about?”  Resigned, I took his outstretched hand with a heavy sigh.

We need to put a stop to this, they’re going to hurt themselves.