I’ve felt a little scruffy this brand new year.  The snow and ice sit-in was fun at first, but by Monday night I was ready to put the kids in a sled and push it—gently, mind you—down the nearest hillside just to get five minutes (or five hours) alone in the house.

See, much as I love(ish) winter break, I do not think it was intended to last as long as the Flood.  I’ve gained a whole new respect for Noah’s wife, trapped in that stuffy boat with crabby kids and cluttered quarters, because after two and half weeks of in-home partying (read:  house trashing), we ended the Big Laze with cancelled church, cancelled school, delayed school, delayed school, and delayed school again.  It was a dream for the kids.  FOR THE KIDS.

Cancelled school is a dream for the kids. FOR THE KIDS.

And speaking of the kids, and the house, and the kids-in-the-house-for-three-weeks-straight:  the Christmas Bomb seems to keep exploding in said house, on a twelve- to twenty-four hour rotation, even though the Big Day was over two weeks ago.  I’ve done nothing but bend over and pick things up since Thanksgiving, but the gifts just keep on giving.  Like a pebble tossed in a lake, each new gadget creates its own ripple effect of chaos, culminating in a three-foot radius of Crap circling every side.  The tree may be down, but the piles still stand high.

Come on, mom.  You know about The Piles.

I’m wading daily through piles of clothes–new ones with tags stuffed beneath old ones needing washed (really kids, why separate them?), piles of baked goods (stale and grody, but we’re not picky), and piles and piles of papers–important gift receipts, important gift cards, important thank-you card lists because I swear I’m gonna write thank-you cards this year, all buried beneath crumpled grocery lists and scribbled-on post-it notes:  return gifts!  use gift cards!  write thank you cards!

And then there’s The Wrap:  gift wrap, bubble wrap, cellophane wrap, plastic wrap–they’ve all nested, mated, and are breeding with vigor in my home.  Just yesterday I bent over (again) to retrieve what appeared to be a cross breed of gift/plastic wrap:  it was red-colored Saran, brought in special for the holidays. Ethan had wound yards of the stuff around a sock snowman he’d made for his sister, apparently hopeful that, though the red is transparent, the sheer volume applied would mask the poor creature’s identity til the moment of unveiling.  (It didn’t work, but sister played along valiantly.)

But oppressive as they may be, The Piles and The Wrap are nothing compared to The Blankets.  Tell me, oh sisters-in-post-holiday-suffering:  what’s with the blankets?  They. are. everywhere.  Slung over the back of the couch, hanging off the side of the chairs, dripping down the seats of my car, wadded in the corners of the family room, spread over the entire living room floor, flat and wrinkled and on purpose, as though we are an Afghan family preparing for Ramadan instead of an American family cleaning up after Christmas.

Wait.  Did I use the word family next to cleaning?  Oh, that’s richer than the stale apple pie coagulating in my kitchen.

What I meant to say is that I am a mother cleaning up after her family’s Christmas.  They’re still having fun, and I’m still bending over.  (And I’ll bet you three lamb kabobs that Afghan mothers are doing the same two weeks after Ramadan.  And if the cross of motherhood is no respecter of nations, you can bet they’re not happy about it either.)

So last night, despite my anticipation (dread) of another late morning, I set my alarm for six a.m., determined to get my own self, at least, back on some kind of sleeping/waking/eating cycle that doesn’t mimic that of a frat boy.  And when the alarm chimed this morning, I’m proud to say that I got out of bed a mere forty-minutes later.

I stumbled downstairs and crawled on the stairmaster, ready(ish) to take on the new year.  My feet plodded slowly (who made these pedals so heavy?) as I surveyed the nine blankets rumpled across the floor, looking as groggy and grumpy as I felt.  I knew that restoring my pre-holiday habits would eventually feel good, but right then it just felt bad.  And hard.  And kinda depressing—probably because it felt so bad and hard.

Fifteen minutes in, I almost quit.  Because, I thought (while hyperventilating), would one more day of frat boy life really doom me in the end?  I was just about to hit the cancel button when I looked up out the window and happened upon this: 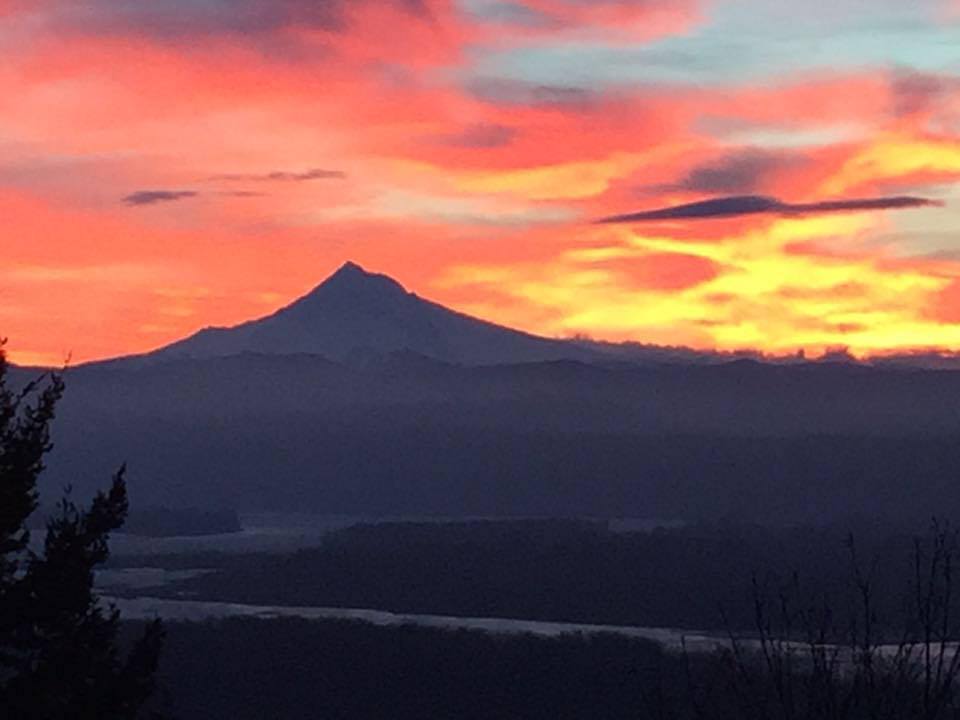 (photo courtesy of Derrick P. Smith, aka the Hub)

A sunrise.  And with it, just moments after this picture was taken, the sun.

The sun.  And everything that hot, melty, pink-orange-red perfect sun implied:  that something good was about to happen.  That things were going to change.  That the dark, the cold, the chaos, The Piles, the stifling hibernation of winter–none of it was permanent; it was not our new reality.  The sun told me that one day—not too far off—the snow and the mess and the sugar-crabbed, housebound kids would be a memory and we’d be looking forward to the light, fresh-air, happy days of spring.

I finished my workout and, before any of my lazy kids got up to start another lazy day, took a lazy moment myself to sit on the (blanketed) floor, look out the window, and stare at the sun.

We’re gonna get through this winter, moms, I know we are.  Know how I know?  Because today, the sun said so.