Last night, my husband told me that I stink.

“Actually Mom, you’re the one who stinks tonight.”  I laughed back and played along.

“Nope–it’s you, Ms. Stinky Nasty Feet.  Get those things away from me.”  I was sure she was just messing with me until my husband, who was brushing his teeth in our adjoining bathroom, dropped the bomb.

“Actually, Jen, I hate to tell you, but you did smell kind of weird tonight.”

“What are you talking about?  What do you mean, I smelled weird?  Like weird bad?”

“Yeah.”  This was stated matter-of-factly.

“Like what kind of bad?”  My voice rose with each word, so that bad rang out in falsetto.

“Oh, I don’t know…”  His voice was muffled through the towel he dried his face with.  “It was kind of…medicinal.”

“What does that mean?”

My thirteen-year old chimed in.  “Yeah, Mom, you did smell kind of bad tonight.”  Why was she smiling?

“What do you mean, bad?  What do you mean, medicinal?  And why didn’t somebody tell me?!” Father and daughter both shrugged while son artfully employed my absence from the book to snag my phone and start a video game.  Let him, I thought.  I had bigger fish to fry.

“So what you are saying is that I actually smelled tonight—smelled bad—and I sat through that whole pack meeting with a million other parents, smelling me-dic-inal, and you didn’t tell me about it til now?  Is that what you’re saying?”

“I didn’t want to make you feel bad.”

“Feel bad?  Feel bad? How about SMELL BAD!?”  I was stunned.  Here I’d spent the evening beaming as my son received his Den Advancement—I’d even gone up to the front so he could “pin” me, dangit—and the entire time, rather than admiring me (as I’d assumed), the other moms were simply smiling at me as they craned their necks away, pretending to look for someone over their shoulder in an attempt to distance themselves from my fumes.  Medicinal fumes.  (Did that mean I smelled like Benadryl or Ben Gay?  I was still confused.) 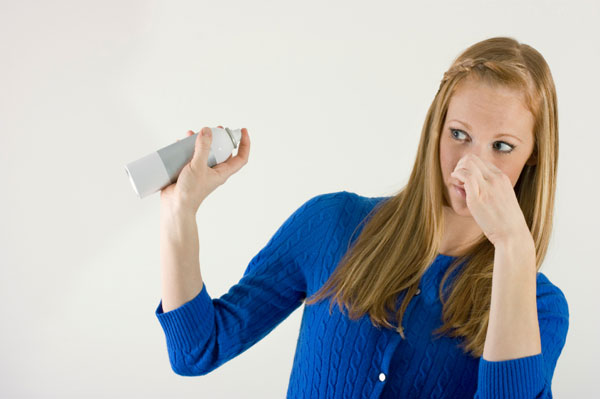 “But I washed my hair today.”

“This cannot be happening.  I’ve never smelled bad before.  I am not that person!”

“I know you aren’t.  It was just…”—AND THIS IS A DIRECT QUOTE—“unfortunate.”

Unfortunate?  Unfortunate?  No.  I was not born to be one of the “unfortunates.” How could I, of all people, smell?  I shower daily: I wear Powder-Fresh deodorant and Moonlit Path body lotion.  I wash my clothes (regularly!) and use Downy (name brand!) in every load.  I brush, I floss, I chew Orbit Cinnamint gum, I use (semi) professional hair products.  But all of this was nothing compared to the fact that I had always seen myself as one of the clean, smiley, socially aware members of society.  I was supposed to be the person who displayed genteel forbearance when somebody else smelled.  (Poor thing, I’d judge silently.  They just don’t know.)  I was the person in control of my breath, my body odor, my life.

And though I cringe to think how my odiferous ignorance may have affected my friendships over the years, even more frightening is the prospect of other “unfortunate” offenses that I never knew I’d given.  Perhaps some of the personal habits I’d always felt so confident about—like my frequently Spanxed-up derriere and even more frequent applications of sunless tanner (who doesn’t like a little glow in January?)—weren’t fooling anyone.  Maybe my “highlighted” (fake) blond hair and “whitened” (bleached) front teeth were merely cheap perfumes splashed over a medicinally-scented body.  Maybe all those times I thought someone was turning their nose up at me (it happens) (kind of a lot), they were really just turning their nose away from me.  Maybe I belonged with The Unfortunates after all, destined to interpret other people’s kindness as approval when really it was just pity.

The only consolation here is that a medicinal body odor often settles (as we’ve all witnessed) on persons of a certain age.  So it might be that I have been a lovely-scented girl my whole life and this new stink is only arriving as part of the general decay of my body.  It’s a twisted condolence, but I’ll take it.  Better to have old-man smell than frumpy-housewife smell.  At least with the former, some wisdom and money are usually attached.  (Which is more than I can say for the latter.)

Better to have old-man smell than frumpy-housewife smell.