I know I have spent a lot of time on this blog trying to explain my husband to my three faithful readers, usually because I am trying to understand him myself.  A recent episode really confounded me, so here we go again:

You see, Derrick is a man of expansive intellectual interests.  He is constantly learning about technology, design, business, writing–you name it.  Consequently, he is perpetually revamping the computer (with which he is freakishly talented), drafting new plans for his office or dream home and, of course, reading a ton:  business books, finance books, outdoor magazines, fiction, nonfiction, and of course, Where the Red Fern Grows for Ethan.  What can I say?  I married a thinker.  Which is a good thing.  I guess.

The rub is that alongside this thirst for knowledge comes a kind of tunnel vision that is truly all-consuming.  Once something piques Derrick’s interest, nothing else exists–including me (what’s new?)  And thus we enter the world of the Phase.  Derrick’s latest interest will always be read about in books, studied online, mapped out, sketched out, graphed out, improved upon, and discussed at the dinner table.  Any previous interests will drop like old chicken feathers as he engages mind, body and spirit into the new love of his life, whatever that may be.  In fact, I just now had an unpleasant thought:  could I have been merely one of Derrick’s Phases, kept around only because our marriage contract prohibited him from replacing me with the next Phase?  (I suppose it doesn’t matter now.  Too bad for him.)

The interesting thing about Derrick’s Phases is that, like any torrid love affair, they begin passionately and end quickly; a sudden, brutal sever that leaves an onlooker’s head spinning (usually the onlooker who’s watching all her Target money being spent on P90X videos and protein shakes.)   Below are just a few of the Phases Derrick has entered into and exited out of during the course of our life together; a separate blog would be necessary to recount them all.

1.  Abby.  The pure-bred border terrier that Derrick just had to have.  After months of saying “no way” I finally gave in when, cleaning our bedroom one Saturday, I discovered a stack of dog books hidden under his side of the bed.  No girlie magazines, just Choosing your Pure Bred Puppy and Dog Training for the Gentle Master.  The earnestness of his desire struck me, and I relented.  Thrilled, Derrick researched and researched and after weeks of careful survey decided to have a newborn, pedigreed border terrier flown into Salt Lake City from Kansas.  Kansas.  I am not kidding.  We both worked full time (pre-kids) and lived in a tiny, spotless, white-carpeted townhouse.  Derrick was militant about guests removing their shoes when they came over, but apparently thought it would be a good idea to have a spastically-bladdered, psychotic little canine marking her territory on the pristine floors.  Funny how in all his research, Derrick missed the part about border terriers being bred to hunt foxes in Scotland, not pace the walls of a condo in Orem.  In sum:  total disaster.  End of Abby Phase.

2.  Photography.  Again, in our childless years, he spent the better part of a full week on campus “building” what would become his very own pinhole camera.  After countless hours in the woodshop, he completed a single side of said camera.  It looked pretty good, like a wooden coaster with a slight ridge on it.  (For the record, I did not say one word about that 4×4 inch square taking him a week to complete.  I would never.)  That little square is all that was ever produced and all that I ever saw.  End of Photography Phase.

3.  Building a kayak.  We were living in Portland, managing apartments.  I had just had a baby and Derrick was working bazillion hours a week at his first engineering job, then coming home to blow leaves and snake out toilets at night.  Money was tight, space was tight, and time was tight.  And yet, one day, he purchased a beautiful twenty-five dollar book with glossy photos of how to Build Your Own Kayak.  He swooned over this book for about a week, planning and plotting, until one night my sister came over for a visit.  She asked him what he was reading about.  When he told her, she just smiled and said, “And what would stop you from building a kayak?  The fact that you don’t have a woodshop, or the tools, or the money, or the time?”  He glumly retorted, “Oh Jaimy, you are a killer of dreams!” and walked off with his book in tow.  But after that day, all talk of kayak building ceased in the Smith home.  End of Building a Kayak Phase.  (And Jaimy is a killer of dreams, but she’s also pretty funny.)

4.  Judo.  This one was more recent, just a couple of years ago. Derrick wanted to get superfit, and months of research convinced him that Judo was the ultimate total body workout.  He bought the books, visited the websites, watched the videos, and signed up for a local class.  My three faithfuls, he even bought a gi.  What is a gi, you might ask?  Oh, only the most respected uniform in the ancient art of judo!  Think of the patch Mr. Miyagi bequeathed upon Daniel-san before the All-Valley Karate Tournament–that’s how important the gi is.  (Okay, so it was karate, not judo, but it’s all MysteriousAncientEastern stuff.  You get it.)  After three Judo classes, Derrick began roaming around the house slapping his knees and mock-punching anyone who crossed his path.  After the fourth class, he got called to be our ward bishop.  For those of you who aren’t LDS, serving as a bishop is like serving as a pastor of a congregation, except 1) you don’t choose to do it, you are asked, 2) you do it without pay, in addition to your full-time job, and 3) the hours you spend doing it will likely exceed that of your full-time job.  Needless to say, with the call of bishop:  end of Judo Phase.

And that, my friends, brings us to car ride my family was sharing a few weeks ago.  We were each quietly lost in our own thoughts when, out of nowhere, Derrick slapped me on the arm and proclaimed loudly,  “Hey, I just remembered a phase from when I was a kid that I never told you about!”

He snapped his fingers, pointed to me, and smiled a thousand watts.  “Falconry.”

“Falconry?”  I was speechless.

“Yeah,” Derrick’s excitement mounted as the memory unfolded.  “I wanted to be a falconeer so bad.  I read about all the different kinds of falcons, how you trained them, what they could do.  I used to draw these really detailed pictures of all the different species.  You know…I wanted the big leather glove and everything…”  Here he stopped talking and thrust out his arm at me, bent squarely at the elbow to illustrate the bodily perch a falconeer would provide his feathered charge.  “At one time, I could have told you everything there was to know about the art of falconry.  Everything.”  He ended the sentence with a satisfied nod.  I looked at this strange man and asked:

“Why didn’t you just collect baseball cards like other little boys?”  To this, the strange man replied:

“Oh come on, Jen!  What kid doesn’t want their own bird of prey?”

Our conversation was cut short by the roaring laughter coming from the kids in the back.  Thinking it would help his case, Derrick began to carefully explain to them what falconry entailed, only to be met with further ridicule.  Rachael in particular couldn’t get over the image of her dad strutting around with a bird on his arm while talking to people at church.  In fact, the idea so delighted her that she went home and directly whipped up this little cartoon. 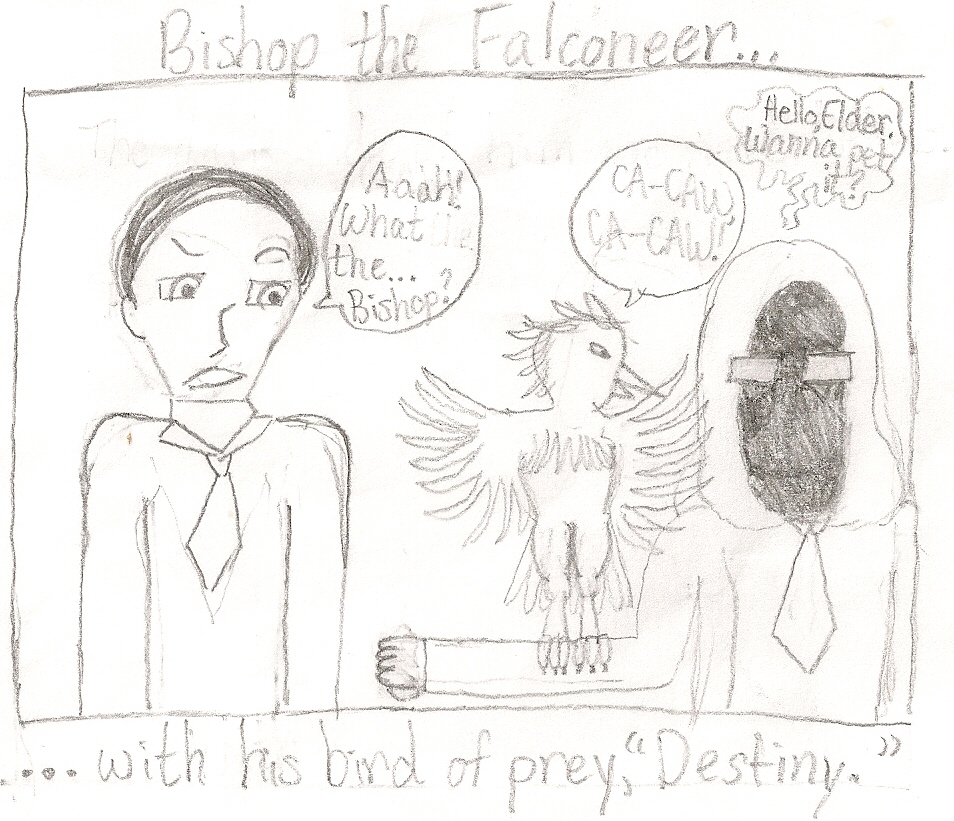 Rache came up with the name Destiny, but I bet Derrick wishes he’d thought of it.  Perfect for the man who’s perpetually fulfilling his own.

8 thoughts on “Of Phases and Falconry.”