You see, last weekend my dearly beloved drove through three hours of ice and snow–out to the rural reaches of Northern Idaho, mind you–to obtain this little beauty for our family: 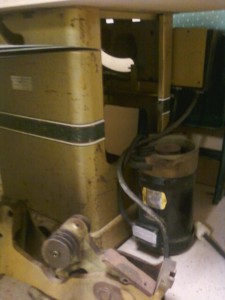 What–you don’t know what that is?

It’s a tablesaw, silly! Only the coolest machine for a boy to acquire since Danny’s best friend Kenickie bought Grease Lightnin’!”  (And  the saw’s in about as good of shape as the car was.)

But don’t worry, girlfriends.  He got a “great deal!” on this tablesaw  and is “going to fix it up!”  Did you know that tablesaws come in varying degrees of “horsepower,” kind of like big pickup trucks?  This one, I’m told, is the MacDaddy, horsiest-horsepower of them all.  Apparently that’s why it’s in such bad shape; because they quit making tablesaws this powerful back in the ’80s, which is when this one was built.  And though it’s “hugely powerful!,” the saw’s advanced age is why it cost only a few hundred–not a few thousand–dollars.  Which is why my testosterone-driven-but-still-kind-of-cheap husband wanted it.  Which is why he braved driving out to the wildnerness to meet the seller who sounded like a gruff neanderthal on the phone and said he would need to “go into town” to use the Internet.  Which is why I told Derrick to be oh-so-careful and not end up like Jack Nicholson on The Shining.

Much to my relief, the purchase went smoothly.  So smoothly, in fact, that the Gruff Neanderthal threw in this bandsaw for an extra fifty bucks: 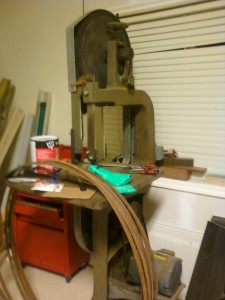 What, you are asking, is a bandsaw?

Oh silly girl–it “can quarter a frozen elk!”  At least, that is the answer Derrick gives me when I ask him this very question.  (Never mind that my husband hasn’t hunted a day in his life and the gamiest thing he’s ever brought home is a sausage pizza.)  I’ve begged Derrick, repeatedly, to be serious and tell me what he’s really going to do with a bandsaw.  I have yet to receive an answer.  He just avoids making eye contact with me and keeps repeating the part about quartering a frozen elk.  (To be honest, I’ve never actually had frozen elk, but I do hear it’s good quartered.)

One thing I must concede:  since the Big Purchase, Derrick’s had a light in his eye and a skip in his step that I haven’t seen since his Food Dehydrating Phase.  He’s announced to anyone who will listen that “I’m reclaiming my garage!” and has given half our stuff away to make room for his new toys.

The upside?  When I asked him what he wanted for Christmas, he smiled and said “Nothing!  This is all I wanted.”  He looked so happy when he answered me, I couldn’t refuse him by purchasing what would surely be a grossly inferior gift.  I should probably just take the money I would have spent on him and, well, spend it on myself.  (It’s only right.)

The downside?  Until he gets his new “woodshop” in order, I have to park in the driveway, and it’s cold.  But the sight of my giddy husband leaning over his new tablesaw when I walk through the garage is enough to keep me warm inside.  In my heart.  In my soul.  In the pit of my stomach, which churns every time I think about him quartering that frozen elk.

It’s beginning to look a lot like Christmas in the Smith home.  And it also looks like frozen elk is on the menu for Christmas dinner.

Are you coming?  Don’t worry.  We’ll thaw it out first.

One thought on “On the fourth day of Christmas…”