So last week, when I was answering the phones at school–

Have I told you about this recent turn my life has taken?  See, this fall, I’ve volunteered to help in the main office of the middle school for two hours, every other Thursday, so the full-time secretaries can take their respective lunch breaks.  Now, I know what you’re thinking:  Two hours every two weeks?  That’s barely worth mentioning.  But let me let you in on a little secret, my secret-keeping sister (or brother):  the only job noisier, more exhausting and more grossly underpaid than that of a full-time mother is that of a full-time school secretary.  She works hard for the money honey.  And for four hours a month, so do I.  (Except I do it for no money, which is something I’ve developed quite a skill for doing over the last fifteen years.)

So there I was: signing sick students out, signing well students in, and listening patiently to parents who wanted to know, five weeks into the eight-week season, if it was too late to sign their daughter up for volleyball.  (True story.)  Amidst all this hubbub, I was also fielding bazillion phone calls, which is apparently the number of phone calls a middle school office receives in a two-hour period every other Thursday.  I’m telling you, that phone rings off the hook.  (And by that, I don’t mean the ring-of-the-phone is cool.  I mean, the phone rings constantly.  Did I just date myself?)  At any rate, I was flying from phone to parent to kid and back again, rockin’ and a-rollin’ way past my paygrade, when one phone call gave me pause:

“Desert Hills Middle School.  May I help you?”  (I wish you could hear how freaking impressive I sound when I say this.)

“Hey!”  The man on the end of the line shouted through a crackly connection.  “Um…you there?  Can you hear me?”

“Like, the people in the cafeteria.  See, I’m on the school maintenance crew and I’m out on a job and won’t be back in time for lunch, but could they just make a plate of it for me and set it aside, and I’ll eat it when I get there?  I’ll pay for it and everything.”

“Yes, they said that’s no problem.”

“Oh, great!  Man, I’ve been craving Turkey Gravy for like two years, and I never know when they’re gonna have it, and so when I found out today was Turkey Gravy Day, I thought:  I gotta make sure I get a plate!”  The happiness in his voice was contagious, which is why it made me so happy to say,

“That was a good idea.  I’ll make sure they keep a plate for you.”  I hung up the phone a little exhilarated.  Oh, what power was wielded from the throne of the front desk!  No wonder these secretaries were always drowning in cookies and flowers; they are women in a position to Get You Things. 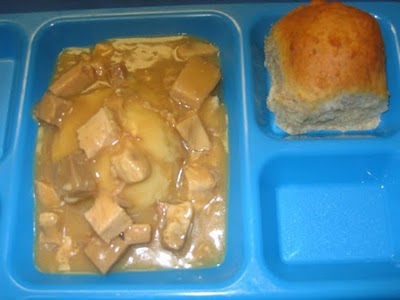 This gentleman’s passion for the Mother of All Starches reminded me of a similar episode that had occurred a few years prior, during this same daughters’ elementary school days.  I was eating lunch with her in the wet area one day, as all good mothers do, when a couple I knew came sauntering by, carrying pink plastic lunch trays loaded down with–you guessed it–Turkey Gravy.

“Hey Jen, how are you?”  The woman beamed at me as her husband caught up with her, both smiling and exuberant in the hallway.  I wondered at their giddiness as I set my ham and cheese sandwich down to smile back.

“Good!  How are you guys?  Here to eat with your daughter?”

“Oh yeah!  She’s been wanting us to come for awhile, but we kept telling her:  you have to wait until Turkey Gravy Day–we want to come eat on Turkey Gravy Day!”  They looked at each other and laughed, from merriment more than amusement.  They were obviously thrilled to be participating in what I can only guess will, at some point, become a national holiday.

When I found out today was Turkey Gravy Day, I thought: I gotta get a plate!”

“And may we ask what you are you doing eating a sandwich–on Turkey Gravy Day?!”  They threw their heads back laughing and then–I kid you not– broke into a spontaneous little jig across the shiny gray tiles.  Their balance of the loaded lunchtrays was impressive; not a drip of that gelatinous brew slid over the edge.

“Honey, did you want Turkey Gravy?”

“I think so too!  Why does everybody love it?”

“Because, Mom–think how gross hot lunch is.  Turkey Gravy is like a tiny bit better than the rest of them, so people think it’s so good.  It’s like they are so used to gross food, they get all excited over something that’s a little less gross.”

I was impressed.  At the tender age of ten, my daughter understood the Stockholm Syndrome.  Give ’em the bad stuff, and eventually they’ll get excited about the not-so-bad stuff.  Sure, it may just be Turkey Gravy, but at least it isn’t a mess of sticky, tasteless monosodium glutamate and caramel coloring.