First:  Did putting “BigBig” in front of “Giveaway” trick anybody into thinking it was, in fact, a bigbig giveaway?  No?  Shoot.

But it is my first giveaway ever, and that alone merits the two exclamation points rendered.  And truthfully, I think any book given or received–but most importantly, read--is a BigBig Deal, for obvious reasons that I’ve already beaten my poor readers over the head with many, many times.  (Thank you for taking it, poor readers.  I know I don’t deserve you.)  Now that I’ve thoroughly disclaimed whatever-it-is-I’m-disclaiming, I’m happy to announce that the BigBig Giveaway Grand Prize Winner is….Rachel Short of Salem, Oregon!  For her brilliant answer of Beautiful Ruins by Jess Walter. 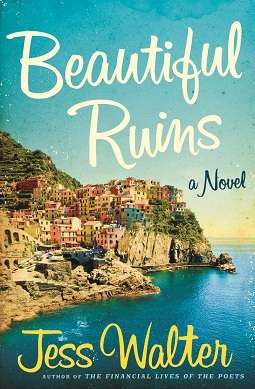 You may be wondering why I said this was a title every middle-aged woman can relate to.  Maybe I’m projecting my own issues onto an entire generation, but these two words sum up how I feel every time I look in the mirror these days.  (It was once beautiful.  Now it’s in ruins.)  Perhaps midlife is treating your mirror more kindly.  I hope so.  (And can I borrow your mirror?)

Indulge me as I pause and tell you that I am not surprised my dear friend Rachel got this right, as she and I have been living quasi-parallel lives since we met in an ill-fated piano class during our freshmen year of college.  We were both there to polish what we thought were our already well-honed piano skills, until we looked around and saw a classroom full of Mormon prodigies who could, um, like, perform–and I mean for real.  We hated our teacher and were pretty sure she hated us too.  (She was mean.) (And got mad when we didn’t practice.)  The class would have been a disaster had not our twenty-year friendship sprung out of it which, of course, transformed it into a smashing success.  (Unlike our end-of-semester solos.)

Mr. Walter will be gracing Bella Voce in May, and I’m thrilled to go see him during Portland’s beautiful spring.  Who knows?  Maybe another Rebecca Skloot-like groupie moment will occur, though with a member of the opposite sex, that could get truly uncomfortable.  (What if he thinks I’m crushing on him?  What if I am crushing on him?  Life with an engineer is all it’s romanticized to be, you know.  I’m just a woman.)

Enjoy the book, Rachel!  And thanks for guessing, everybody.  That was fun.  My next giveaway will be something blindingly cool and a little less stuffy.  Let’s see…anyone interested in a Ross giftcard that expires in June?  No?  Then how about a coupon for thirty minutes of the Hub’s time, in which he’ll tinker with the digital gadget of your choice until it kindasorta works, eighty percent of the time?  Still a no?  Fine, I’ll think about it.  (But hang on to your hats, because our used-only-once Food Dehydrator has been looking for a new home since we used/quit using it on Christmas Day, 2011.)

I have one more book I’m going to ask you to read, and then I’ll silence myself on books for awhile–this is a blog, for Pete’s sake, not a Lit class.  (Oh, you thought it was?  Cool.  Your essay on “Why I Want a Used Food Dehydrator” is due by the end of this post.)  My faithfuls, mis vidas, before you go get your roots done or eat another Skinny Cow ice cream bar (you’re eating one now, aren’t you?), I beg you to jet over to the library and check out A Girl Named Zippy by Haven Kimmel.  You will love this book.  You will love Zippy.  You will love your childhood, all over again.

This book’s actually been around for awhile; it was published in 2002, and I only remember that because I first heard of it while sitting on the couch nursing my second baby and watching the Today show. (I could cry for the simplicity of those days.)  An acclaimed author was asked what her own favorite, current book was, and she promptly answered “A Girl Named Zippy.”  She described the book as “a shot of pure joy,” and twelve years later, having just finished the whimsical memoir, I have to agree.  A Girl Named  Zippy is funny and quirky and original, and it is also exquisitely written.  It is about an ordinary childhood in an unremarkable place and time.  Come to think of it, A Girl Named Zippy is the perfect literary antidote to The Triple Package, as Zippy’s parents espouse a parenting philosophy diametrically opposite to that of Amy Chua.  Read Tiger to motivate you, then read Zippy to comfort you.  Then read my blog so we can talk about them both.

A Girl Named Zippy is funny and quirky and original, and it is also exquisitely written.