Are we?  Yes, I just decided that we are.  Almost as much reading good books, I love talking about good books–especially with you, my faithful readers of good books and random blogs.  (You’re here, aren’t you?)  In my last post I offered a free Good Book* to the deserving contestant who guessed its title, and while we wait for a winner**, we need to talk about the Next Big Thing:  Triple Package, by Amy Chua and Jed Rubenfeld.

You remember the Battle Hymn of the Tiger Mother, of course, and I hope you read her fascinating and funny book.  My initial skepticism over Ms. Chua’s “strict parenting” gave way to admiration upon reading her self-deprecating memoir.  And because I was skeptical, I took the whole thing with a hefty grain of salt:  it was an entertaining read in which she made some valid points, but it certainly didn’t make a Chua-disciple out of me.  And though I applaud many of her theories, I lack the drive and discipline to carry them out as she does.  The result?  I have studious kids who will never make it to Carnegie Hall.  I’m okay with that.  And I still think that she’s just a fun and substantial writer to read.  We need more of those.

Which is why I’m excited to pick up a copy of The Triple Package this weekend.  (As with all important things in my life, I have also lost my Nook, so now I’m back to reading old-school paperbacks.  Don’t tease please.)  This time, Chua teamed up with hubby Jed Rubenfeld, a fellow Yale Law professor (whom I’ve decided is altogether dreamy.) 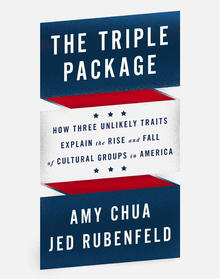 From what I’ve gathered, The Triple Package explores and explains why certain seemingly disparate cultures are performing disproportionately well in America today.  The cultures listed are:

And in these cultures, the authors claim, are three basic mindsets that drive its members to get ahead:

1.  A sense of exceptionalism:  believing you are special, and thus special things are expected of you

2.  A sense of insecurity:  believing you have something to prove, and being willing do what it takes to prove it

3.  Impulse control:  an ability to control your appetites and resist temptation–especially the temptation to give up

Riveting stuff, if you ask me.  Picking the brain of a single person is one thing, but understanding an entire culture’s secret to success is something else altogether.  Because if the same common denominators work for thousands–even millions–of people, they may just work for us.

As was surely intended by it’s authors, the book has already kicked up a firestorm of controversy, especially among academics and journalists who dismiss its claims as racist–though the authors emphasize that culture is what matters, not race.  (The debate is raging online; be prepared.)  The book examines cultural and familial expectations, not I.Q. points and genetic maps, which is what makes their argument so compelling and, I believe, so optimistic.  Everyone has access to the three tenets of the Triple Package–because it’s a mindset, not biology–and therefore, everyone has access to success.  The point is that some cultures are embracing these tenents more fully than others, so we can all learn from their example.

I should stop here and mention that I belong to one of the cultural groups listed in this book.  This may explain some of my interest in it.  (Three guesses on which culture I belong to.  Spoiler alert:  I’m not Nigerian.)  But the generalizations about an entire culture’s success are obviously broad, as I know many people from “my” culture who are confirmed underachievers.   (No offense, but really.  You know who you are.)  I wonder: were I not included in any of these esteemed cultural groups, would I feel differently about the premise of the book?  Probably.  Probably I wouldn’t like it at all, and that’s probably why it’s got so many people hopping mad.  But honestly, I am more interested in learning about the tools of success than about who’s using them.  Because then I can put them to use in my own family culture, which is where I believe my children’s destinies are truly determined.

As with her first book, Chua has taken common sense (Belief in Oneself + Discipline = Success) and wrapped it in a timely, readable package.  If nothing else, this writer knows how to get people talking, make people mad, and sell some serious books.  I, for one, don’t mind being one of the minions tossing coins in her well; I’ve spent money on worse.  (See pp. 3, insecurity  and impulse control.  Having the former without the latter has cost me a lot over the years.)  And as I did with Tiger Mother, I will also be taking this book with a hefty grain of salt.  These are general ideas about people and their habits, not scientific proof about where where we’ll each end up in life.  None of us want to feel “determined.”

Are you going to read The Triple Package?  I hope so.  Because if you do, I’ll invite you to post your opinion about it here.  And it’s okay if you don’t agree with it; I may not either.  Then again, I may love it–and so might you.  That’s the thrill of an unopened book, isn’t it?  Worlds await, admission is free.  (Well, not exactly.  But it made for a pleasing idiom, no?) Now I’m off to drive my son to basketball practice in a pitifully Western, non-Tiger Mom manner.  (He should be in violin, not basketball, speaking Manderin on the ride over while finishing his calculus.  And he should already be in bed–preferably without dinner.  Shoot.  I’m hosed.)

Are you going to read The Triple Package? I hope so. I’ll invite you to post your opinion about it…

*hint:  the Good Good Book referred to here is not the Bible.  Although if I was a better person, that’s what I’d be giving away.

**hint hint:  the author’s last name is the first name of a certain befuddled-but-loveable germaphobe in 1993’s Sleepless in Seattle.  (Those of you under age 30 will be at a disadvantage with this hint and yes, that is intentional.  You’re too young and pretty.  I have to make things fair somehow.)