Last Monday, my son and I drove to the high school to watch my daughter’s first tennis match of the season.  She played well and I let her know it; not with any big fanfare, just the occasional “Good hit Meg!” across the quiet court.  Tennis fans don’t cheer or whistle, see, they watch–so I was extra careful not to let my enthusiasm get the better of me. From my perch behind the chain-link fence, I voiced just enough encouragement to let her know that I was there and I was proud of her.  Truth be told, I was proud of myself.  (Restraint doesn’t come natch to me.) 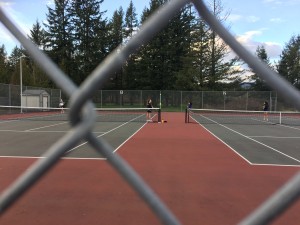 Afterward I ran over and hugged her, telling her I couldn’t wait to watch her next match.  She smiled without saying anything and asked if she could drive home with her friends.  Of course she could!   My little champion. A few days later, she came home late from practice and I asked her where she’d been. Head buried in fridge, her voice came out muddled. “Oh, I had a match, I forgot to tell you.” “What?  What do you mean you forgot to tell me?”  She emerged with a yogurt and looked just past my left shoulder, like she was talking to somebody else. “Yeah…sorry…I…” And she trailed off to the bathroom, from which she didn’t emerge for several hours.  (This last part is not unusual and is not the source of my concern.) The source of my concern came the next evening, when we were all sitting around the coffee table discussing the week’s upcoming events.

I said, “Meg, when’s your next match?  I need to know so we can get it on the calendar. I don’t want to miss another one.”

“Whenever you come, you yell really loud across the court.  You did that last year, too. It’s embarrassing.”

She looked sideways at Ethan and they both started laughing.  Ethan wasted no time getting on board. “You do Mom!”  he squealed.  “Last time you kept yelling ‘good hit!’ and nobody else was even talking!”  He looked triumphantly at his sister, knowing his contribution would earn him a coveted spot in her Circle of Scorn For the ‘Rents.  (It’s an ever-widening circle. There seems to be a lot of scorn.)

“What are you talking about?  All I did was say ‘good hit’ a couple times, it’s just that it’s so quiet, even talking sounds like yelling.” “I know.  And other people get that, that’s why they don’t say anything.” “Well, excuse me if I like to cheer my daughter on when she’s winning.” “That’s another thing.

You asked me what the score was right when I was serving!”

This was true.  But not as lethal as she was making it out to be.

“Now wait.  You were serving right in front of where I was standing, you were like two feet from me and there was a break in the game and I asked you quietly…”

“No, you weren’t quiet, everybody heard! And why can’t you just look at the scoreboard like everyone else?”

“Because that scoreboard is impossible to read!”

“Do you know how they keep score in tennis, at least at the high school level?” They have a little stand with slots on either side, and whenever your team wins a game, you put a tennis ball in a slot.  Whoever reaches Slot 8 first, wins. So at any given time one team might have, say, a ball up to Slot 5 while the other has one up to Slot 3.  That’s eight slots total. Does this mean eight games have been played and the match is over? Or does it mean that one team has to win eight games to win the match? If so, then you’d have to start over with a whole new scoreboard if you were both at seven, right?  And then of course there’s the infinite confusion between a game and a match–who contrived that nonsense?  Oh, and throw in the fact that they have to win by two games (not two matches) (I don’t think?) and you’ve got everyone bewildered.  I’m just the only parent brave enough to ask what it all means. And I have asked Megan–multiple times–but she hasn’t done very a good job explaining it because I still don’t get it. 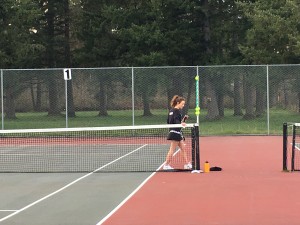 Can you tell who’s winning by that thing?

“Megan, you are so mean.  I do not talk too loud at your matches…”

I was cut off by a fresh wave of cackling from the couch, where Megan had joined Ethan to stage-whisper cruel things about me.  Ethan was giddy, finally in kahoots with his cool big sister. He had plenty to offer for the privilege. “I know…I told her to stop, I could tell you were embarrassed…she just kept yelling…”

“I was not YELLING!”

Megan stopped laughing and looked at me with the infamous straight face–slackjaw, deadset eyes–that she always used to inform her enemy the gig was up.  It was the same face she’d made as a toddler when we’d dance around her highchair trying to make her laugh; a boredom-contempt combo. As her dad used to say, “Megan is a hard sell.”  And she wasn’t buying it now.

“Mom, you always talk too loud.  I’ve told you this before, but you don’t listen…”

I’m not sure how she finished this sentence because I had stopped listening.  Talked too loud? At a sporting event? Pshaw. Embarrassed by my cheering? Pshaw.  Always talked to loud?  Well.  Well, maybe. My mind flitted to my last Costco trip.  I’d been on the phone with my sister, waxing rapturous about the Dave Ramsey Cash System which I totally believe in and, someday, will certainly do.  (Try to do.) (Probably.) As I walked down the aisles, phone to ear, I noticed people kept looking up at me with a curious expression. Not irritated, exactly, just like they were a little surprised to see me there.  One by one, each person I passed popped their head up and watched me walk by. What gives?  I thought.  Another great hair day?  When I got in line (still talking) the people in front of me turned around and looked too, then kind of smiled and look away.  They seemed bemused somehow. About what?

I wondered.  But now, sitting on the couch and deep in the Circle of Scorn, I thought I might know. And then my mind flitted way back, to the days when we four kids would stay up playing games after Mom and Dad went to bed.  Mom would always shuffle out an hour later in her bathrobe, scolding us to quiet down and “especially you, Jennifer, your voice carries like a trumpet right into our bedroom.”  I thought this was rude. (But I also thought it was kind of funny.  I wasn’t very penitent.) And then I also remembered the (multiple) times in a crowded restaurant when my sister–my loyal, loving, bestiesister–would look around with a tight smile and say “shhh!” to me right when I was in the middle of a telling a reallyreallygood story.  It wasn’t a shush due to content (I’m not as racy as I look), it was–I saw this now, from the perch of the couch–a shush due to volume. So maybe Meg was right; maybe I do talk too loud. But she’s forgetting the truism I’ve taught her since birth:

It’s true:  between my bad hearing and my stunted social skills, I find myself yelling when I should speak and speaking when I should whisper.  Which doesn’t bode well in a movie theater, but makes perfect sense on a tennis court. Let the hoity-toity tennis moms clap their white-gloved hands and nod inaudibly to their precious little players.  I’ll be standing on the other side of the chain link fence (preferably within a foot of Megan) screaming “YOU CAN DO IT SWEETIE!” And if Megan doesn’t like it well I guess that’s just too bad.  Because like it or not, when her next tennis match rolls around…MOMMY’S COMING!! She’s coming loud, and she’s coming proud.  She may not be able to hear you, but you’ll sure as heck be able to hear her. (Which, when you think it about it, is not a bad strategy for raising children.)

One thought on “Banned from my daughter’s tennis match.”