Meeting Geraldine Brooks was just the beginning.  Last Thursday at Bella Voce, I met—get ready for it—a fan.  As in:  someone who doesn’t know me but likes my work.  As in, like, a fan!

I’ve never had a fan before.

Sure, since the beginning of this blog I’ve claimed to have “three faithful readers,” but it’s probably time to admit:  I made them all up.

And as for having fans?  Ha!  I’d just as soon pray to wake up one morning with longer legs and a fuller bust.  (I’ve tried.  It doesn’t work.  But that doesn’t mean you should stop going to church.)

Last Thursday, however, the universe tilted and the stars realigned and I met, in the flesh, my friendly, funny, first-time-ever fan.   She may well be my first, last, and only, but so what?  I’d say a fan-in-the-hand is worth three faithfuls in the bush.  Or something like that.  You get me.

It all started, of course, with Renee Newman.  I told you how she gallantly introduced me to Geraldine Brooks before the event (can a woman be gallant?  let’s say yes.)  What I did not tell you is that she also introduced me to a friend of hers afterward, a woman who works at Umpqua Bank as well, which sponsors Bella Voce.  A woman who turned out to be….my FAN.

It was well after the book signing when most women had left, except the few of us who were truly  committed.  Having hovered over Ms. Brooks as long as was legally viable, I turned my gaze about, pretending to look for someone (anyone), though in truth all I saw was that my table had been cleared and my jacket and purse stacked solicitiously on a nearby chair.  (Were they giving me a hint?  Well, I thought.  Just try to kick me out.)  I dug in my heels and waited for something else wonderful to happen, because that seemed to be this day’s destiny.  And so it did.

“Jennifer!” It was beautiful Renee, approaching me with more beautiful tidings.  “Have you met Kerri?  She’s a big fan of yours.”  Renee said this breezily as she walked by, leaving me reeling in my own shock and self-importance.  Wait, whoa–what?  Did she just say I had a fan?

A fan?  An hour earlier, I would have told you that meeting Geraldine Brooks was the highlight of my day (life), but that was before I discovered that I…have…a… FAN!!  In this moment of moments,  there was only one thing to do:  take a selfie. 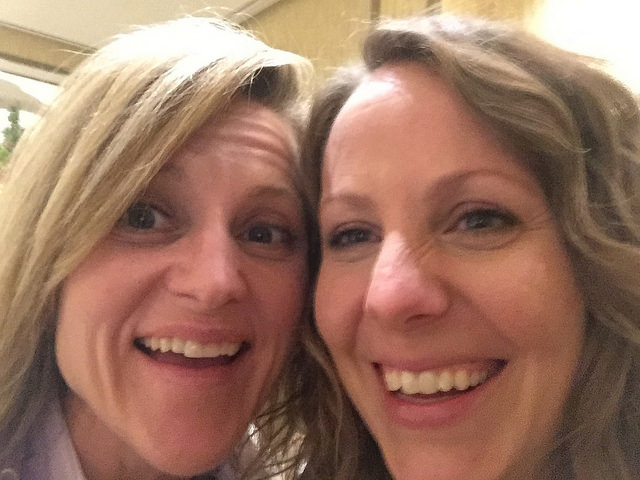 Isn’t she cute, young, and sparkly?  Just as I knew my Fan would be! (Because, as you know, it’s all about me.) And just look at that beautiful smile.  Kerri was as warm and fun as she looks in the photo.  Meeting her was a blast and, as you can tell from my expression, somewhat dizzying.  (What can I say?  I’d just discovered my Fan.)

As if this wasn’t enough of a hoot, we then asked Renee to join us in the selfie, which she merrily informed me would make it a three-fie.  (In addition to her charm, Renee is also very, very cool.)  Having little experience with selfies (see above), I asked Renee to take the picture, since this was kinda her gig and well, she had the longest arms.  As she held the camera out, she gave me a standard selfie tip:  “stick your chin out.”  Looking at this photo, I wonder:  how did I think that advice could ever apply to me?  It served only to make a big problem bigger.  Oopsie. 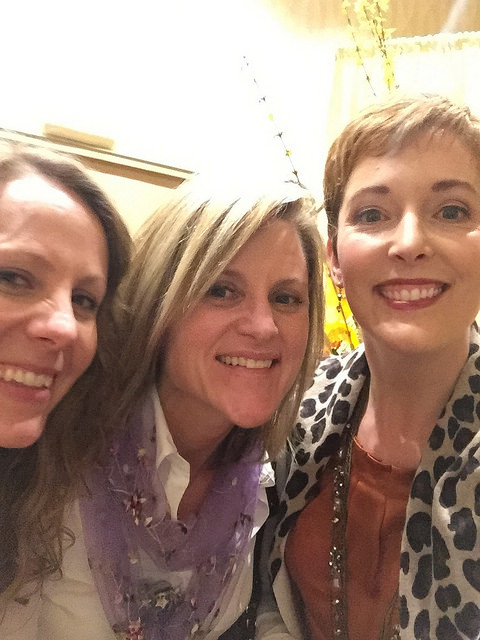 But look at gorgeous Renee!  Really, she was just so gracious and fun.  And I had so much fun flanked by these two lovely ladies who made my fabulous day even fabulous-er.  I may have had tired eyes, a runaway chin, and the Worst Hair Day of My Adult Life, but now I also had:  a Fan.

(Did I mention that I have a Fan?)

[Tweet “Did I mention that I have a Fan?”