Lately, my fortysomething body hasn’t given my eyelashes much love.

I’m not gonna lie, I used to have really long eyelashes.  As  with my really long toes, I’d always considered them one of my better features.  Stepping out in flip-flops and a bit of mascara, I needed only to bat my eyes and flash my feet and hearts were mine for the taking.

But in the last few years, my beloved lashes seem to be getting shorter and sparser.  They seem to be, well, disappearing.  (And yet my long toes remain.  And are only getting longer.)  I’ve been told that lash loss is one of the awesome benefits of aging but not to worry–the new hairs growing on my chin will more than make up for it.

Last week, however, I learned that all of this was going to change.  How?  With a tube of the latest, greatest, miracle-making mascara.  The sales “girl” (pretty sure?) at Ulta informed me that this new-and-improved formula would make my lashes thick, full, and oh-so-long, due to something called “buildable volume.”  I asked her what “buildable volume” was and she graciously explained it to me.

“It means you can build it.”

Now I’m no makeup artist, but I’m pretty sure we invented “buildable volume” back in ‘87 in the high school girls’ room, where we “built” a new layer of all things Bonnie Bell and AquaNet between every. single. class. But I smiled and nodded anyway, pretending to listen to this Millennial who knew nothing about the real origins of Thick Makeup.  I’m a child of the ‘80s, dear.  Don’t preach “buildable volume” to me.

Regardless, the girl was sweet and I took a tube off the shelf.  It was only twenty-five dollars; the kids could pony up their own lunch money this week.

At the checkout counter, a young girl with big, BIG lashes–the long wiry kind you only see at checkout counters in Ulta–smiled and rang me up.  I tried not to stare, but her lashes were coated so thickly, so lumpily, that they shot into single black threads that splashed across her face like a spiderweb; I half-expected Charlotte to swing down and call for Wilbur.

Wow, I thought.  Much as I missed my youthful peepers, I was glad I hadn’t gone for that look.  She was pleasant, though, and I thanked her as she wrapped up the ‘scara up for me.

“You will love this mascara!”

“Oh good, the woman over there said it was great, I’m excited to try it.”

“Really?”  I squinted at her, like when you’re watching a Donald Trump press conference and are terrified of what he might say next.

“You will absolutely love it!”  She winked and I worried that her gelatinous lashes would coagulate, rendering her face permanently scrunched on one side.  But I turned and left before I could tell.  Some things are best unseen.

Walking to my car, head down and ears low, I suddenly remembered the Three Great Truths About Makeup that had somehow slipped my mind between the dizzying Ulta lighting and the cheerful encouragement of its staff:

I remember my own mother at the age I am now; she was forty-four and I was nineteen.  She would come home from the drugstore all jazzed about a new face cream that was guaranteed to erase all the wrinkles from her neck.  She’d use it for a day then toss it atop the ever-growing mountain of Cheap Crap that Doesn’t Work, which rose just to the left of the sink on her faux-marbled bathroom counter.  The following week, she’d return from the hairdressers with a (nother) new ‘do and a giddy glow.  Do you like it? she’d ask, humming while she started dinner, only to be poring over magazines a week later, trying to find the Next Great Hairstyle that was guaranteed to “instantly take ten years off!”  Later, while we roamed the mall together–as mothers and daughters roamed malls together back then–she’d splurge on a department store lipstick because, she was told, it was guaranteed to “plump up” her lips.  As soon as we were back in the car she’d twist it open, crane her neck for a reflection in the rearview mirror, and slather it on with a vengeance.  Pressing her lips together with an overworked, fish-like-flourish, she’d spin around to face me.

“What do you think?”

“Do my lips look plumper?”

During those episodes with my mother, I was forever thinking the same thing:  Mom, you are so old.  Why are you still trying?  I wanted to convey to her the futility of her situation–I felt it my duty as her daughter–but wasn’t sure how to go about it delicately.

I had tried several approaches when shown another of her Useless Beauty Products:  getting interested in my homework, pretending I couldn’t hear her, offering her a fat-free Snackwells cookie.  (Remember in ’92 when everything was fat-free? Good times.)  When these methods failed, I downshifted to the standard Snotty Eyeroll, but my sassy mom would just roll her eyes back at me, undaunted and undeterred.

I loved my mother, but she seemed completely oblivious to the fact that she was a senior citizen.  She was forty-four for heaven’s sake!  She’d lived a good life, but it was time she bid farewell to her best years.  It was time for tight curls and wrinkles, not highlights and lip plumpers.  It was time for Ben Gay and aprons, not face cream and slacks.  (Shiny.  Pleated.  You remember.)  The woman was a decade past her prime; hadn’t she seen Planet of the Apes?   There, they’d disposed of all persons past the age of thirty-five because–hello–what could someone that decrepit possibly have left to contribute to society?

Now, I didn’t necessarily think my mother needed to die at this point.  But I did think she needed to stop pretending she was young.  I mean, hairdressers, lip plumpers, slacks?  It was time for a rocking chair, not rocking out in the kitchen.  (Which she still did, much to my chagrin.  Dancing to Abba on the linoleum, can you imagine, at her age?)  Someone needed to explain things to her–someone needed to tell her how old she was.  I had almost worked up the nerve one day while we drove to the store together, as our conversation had naturally flowed into her upcoming birthday and how she felt about “getting older.”  I thought I saw an opening and was just about to inform her that she wasn’t older, she was old, when she dropped the following bomb:

“You know, when you get older, you still want to feel sexy.”

I threw up a little in my mouth and decided to keep quiet.  I obviously wasn’t getting anywhere with this woman.

I need to tell her that lip plumpers really do plump, cheek blushers really do blush, eyebrow definers really do define.  Concealers conceal, bronzers bronze, mattifiers mattify, highlighters highlight, lengtheners lengthen, whiteners whiten, smoothers smooth, thickeners thicken, volumizers volumize, and darn it all to heck, age defyers really, truly, and absolutely do AGE DEFY.   All of it works, Mom.  ‘Cause now I am forty four years old and I just dare anyone to tell me that it doesn’t.  (See Great Makeup Truth #3.)

Which is why when I came home from Ulta, applied the twenty-five dollar mascara, and saw that my lashes looked exactly as thin and sparse as they had before, I refused to believe it.  I simply applied another coat, and then another, and then another.  If buildable volume was what was needed then by golly I would build it, certain that a miracle was waiting for me on the other side.  Because the mascara had to be worth twenty-five dollars; the salesgirls had to be telling the truth; the Universe had to be just that kind. 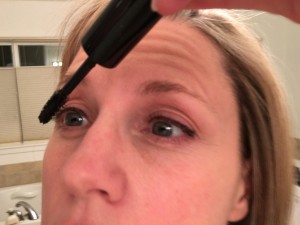 Because if it’s not, and they’re not, and the Universe isn’t, and none of this glamorous goo really works, then I’m just another middle-aged woman living in denial while throwing pennies in the fountain of youth.  And–mamma mia!–my mother raised me better than that.