The most coveted gift received in the Smith home for Christmas 2017 wasn’t wireless earphones or a pair of Nike Zoom Vapors.  It was this: 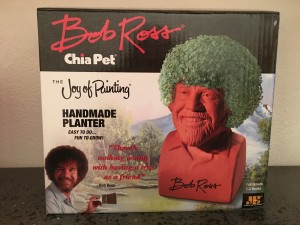 Could you die?  Like a standard Chia Pet isn’t cha-cha enough, they go and Bob Ross it up?  Dee-vyne!

It’s like his name was in the air this year.  A few weeks ago, my son had a friend over who was waxing poetic about how freaking awesome Bob Ross is.  I found this delightful, having assumed that Bob Ross was forgotten with my generation of Shows We Watched While Faking Sick. Turns out he’s still stippling strong via You Tube.  Who knew? 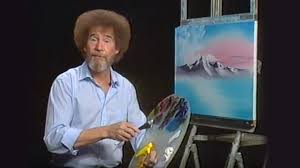 The following week, we received a Christmas Card which was, without a doubt, the Grand Prize Winner of the Annual Unspoken Christmas Card Contest (don’t pretend you don’t rank them as they come in.)  Check out this symphony of awesomeness: 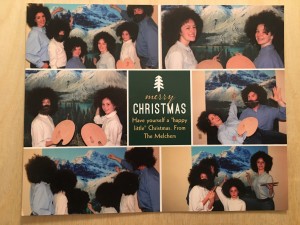 Could you die?  Who has friends this Ross-ome?  WE DO.

That’s three Bob Ross sightings in three weeks.  Shoot, I haven’t been that Ross-ed up since I cried “mono” in the twelfth grade.  (I almost didn’t graduate, but I did get five straight weeks of the Bob Ross/Love Connection/Family Feud afternoon lineup.  You tell me who’s the smart kid.)

Now before we get too Bobbygiddy, I should mention that there’s been a little trouble in paradise.  When Ethan first opened and irrigated Bob, he wouldn’t produce.  Despite persistent watering and waiting, my son’s dreams were dashed as Bob’s head continued to looked less like Jimi and more like Gollum.  After a few days and at a total loss, Ethan left Bob on the counter and moved on to the X-box (where, apparently, every kid on the continent was waiting to challenge him.  Did your kid play against my kid on the X-box over break?  Thought so.)  Well, the Hub came along and decided that Bob the Bald just would not do.  So here’s what I caught him doing that night: 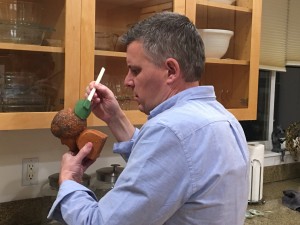 Friends, he spent hours–hours–spatulating Bob Ross’s head.  Ethan had lost interest, the girls and I had never had interest, so Derrick could have easily tossed Bob in the trash and no one would have been the wiser.  But this is how the mind of a normal (read: lazy) person like me works–when in doubt, throw it out (and cue up Love Connection.)  Derrick, however, was cursed with this insane need to be productive.  And thus, in between pouring concrete counter tops and refinishing the hardwood floors, he found a few solid hours to coif Bob.  He peered, he examined, he “tsk”-d, he may have even grunted, but he spared no attention to detail. 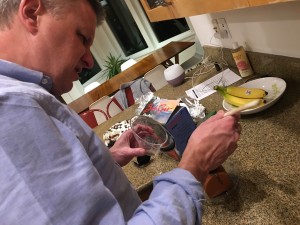 And the results speak for themselves: 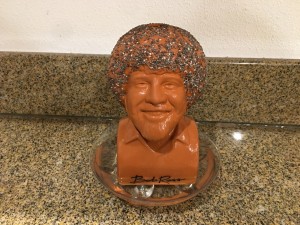 I’m proud to say that Bob Ross is growing in thick, fresh and fabulous on our kitchen countertop.  We’re anticipating that his full crop will bloom in spring with the tulips–as long as we keep watering him and, I suppose, talking to him (’cause a Chia Pet is a plant, right?)  I think these tasks will fall on me, but what does one say to the Great Bob Ross?  Good job on those mountains, they always looked real?  Or, You were always a True G? (I’m told this means true gent, as in true gentlemen.  Not to be confused with OG, for original gangster.  Two very different implications, people.)  Actually, I think I’ll just follow my other 80’s crush (Bryan Adams, natch) and give it to him straight from the heart:

Thank you for keeping me company in February  of ’91.  I know I could have gone to school but it was cold out and I was getting pretty tired of sitting at a desk.  I credit you, Bob Ross, with the artistic ingenuity I’ve displayed on this blog.

(I credit Love Connection with my marriage.  But that’s a whole ‘nother post.)