Who ever said the “most wonderful time of the year” was Christmastime?

Ask any mom when the most wonderful time of the year is and her answer will be the same as my answer, and my mom’s answer, and my grandma’s answer and my sister’s and my best friend’s and the grouchy neighbor lady’s down the street:  the most wonderful time of the year isn’t Christmas, it’s the week after Christmas.  For every mother, everywhere. Because as of December 26, a mother is no longer responsible for turning every euphemism in the blessed canon of carols into a living and breathing reality.  You see, the holidays have a way of taking the blood, sweat and tears of us moms and wrapping them in candy-coated words like peace and joy.

Peace and joy?  Really?  Says who, the self-checkout voice at Target that asks you–once again–to “Please. Put. Your. Item. In. The. Bagging. Area.”?  You’ve heard this grim electronic suggestion at least ten times this December, and yet are never able to persuade the robot inside the scanner that your item is ALREADY IN THE BAGGING AREA; it’s always been in the bagging area, it was born in the bagging area.  It’s 2017; why can’t a fake human understand this?  So now the “Attendant” light is flashing on your screen and you’re stuck waiting for a real human to help you, even though the whole point of self-checkout was to avoid waiting for real humans in the first place because, naturally, Target has but two real humans working but two real checkstands at 4:00 pm on December 23.

Look, I’m not a Scrooge; the merry-and-bright moments of Christmas are not without their merits.  It should just be understood that they are all earned off Mama’s back.  Words that bring cheer to some people may bring drear (or even fear) to others.  Examples:

1)  that people are putting on nice clothes to help decorate, and

2) that people are helping decorate, period.

Sorry folks, but this is Mom’s show.  She navigates a maze of dust and gloom in the Scary Basement to procure seventeen oversized, bright red plastic tubs bearing the masking-taped label of Christmas. (Because the bright red isn’t enough of a hint.) She stands on a rickety folding chair to pull said tubs down off a high shelf; this endeavor grows more dangerous each year as her weight-to-chair ratio grows ever more disproportionate.  She lugs said tubs, one by one, up two flights of stairs and watches as kids tear lids off, pull glitterystuff out and fling glitterystuff on every unsuspecting surface in the house.  She smiles–hard!–as glitterystuff lands on tree and shelves and carpet (mostly carpet) while she glides around the room singing along with Mariah Carey and pretending to have fun.  She then lugs–lugs, I tell you–the empty tubs back down to the basement, which is now a mess itself, having been ravaged during her initial quest for said tubs.  She then waits til the kids go to school on Monday morning to re-do everything in an effort to make the living room look more Martha and less Snooki.  After hours of rearranging, reducing, and restyling, she has to face it:  still Snooki.

Do we even need to talk about the agony of The Christmas Card?  Legend calls this is a December tradition, but every mom knows it really starts in August, with the launch of the Family Picture Crisis.

Do we even need to talk about the Family Picture Crisis?

Clothes are bought, tears shed, marriages destroyed.  Diets launched, eyebrows woven, self-tanner applied.  And yet:  mom never likes The Family Picture.  She looks fat, she looks old, she wore the wrong thing.  (After all that time at Target!)  But a picture is ordered nonetheless, and in December she closes her eyes and swallows hard and splashes that picture of her oldandfat self across one hundred holiday cards and into the eyes and mind of every person she’s ever tried to impress.  Season’s Greetings!

She tries to hit just the right note with the family Christmas letter–the most important humble brag of the year–but her efforts at self-deprecation only reveal to the world that her children have, in fact, done absolutely nothing this year.  (She makes a mental note for next year:  some outright lying may be due.)  After she tallies up the cost of the new clothes, personal photographer, digital copyright, custom-made cards, postage and emotional anguish, she realizes she could have chucked the Season’s Greetings and taken the family to Bali instead.  She makes a mental note for next year.

The words “Christmas” and “Traditions” can be translated, for most mothers, into two alternate words:  “Oh” and “Crap.”

The very question, “What are your family’s most beloved Christmas traditions?” is enough to strike terror into the heart of any mother who’s not Nie Nie.  Traditions, we are told, are the very fabric of family life; the tie that binds, that thread that knits.  When your children are grown and flown and wandering the wide world alone, it is Family Christmas Traditions that will, at long last, bring their souls home.  And by “Family Traditions” we mean “Mom’s Traditions,” because no way is Dad gonna spend his week-off Preserving Tradition.  (He’s too busy being the fun guy that everybody loves.) So if Mama ain’t traditioning, ain’t nobody traditioning.

And even if Mama has traditions, she worries:  are her family’s traditions meaningful enough, storied enough, legendary enough?  Would they hold up as “tales of old glories of Christmases long long ago?”  Well…she does buy the kids a new Christmas book every year (oh crap) and the kids do each get their own special ornament every year (oh crap!)  She realizes she has forgotten to do both.  It’s 11:42 on Christmas Eve and she’s pretty sure Walgreens is open til midnight.  The selection will be sketchy but the price will be right.  She dons her gay apparel and sneaks out the back door.   (True story, btw.  It wasn’t a great year for me.)

For most mothers, traditions are like baby books: so important, so far-reaching, such a reflection of our maternal prowess that they should simply be avoided altogether.  (At least, that’s my tradition.)

And ‘round  it goes:  parties for hosting, marshmallows for roasting, caroling out in the snow.  It can all happen, sure, but only with these two thumbs (which are now calloused from curling miles of that skinny red ribbon–you know, the one we’ve had since ’98.).  So as I un-decked my halls this morning, I couldn’t help but think of an old Michael McLean song called I Cry the Day I Take the Tree Down.  It’s about a young woman who used to hate Christmas but then, through a series of Dickensian events, finds that she actually loves it, and thus cries-the-day-she-takes-the-tree-down.  It’s moving, really.

But with due respect to Mr. McLean: I smile, I laugh, heck, I dance the day I take the tree down.  Because as that tree comes down, with it come all of the expectations I place on myself.  And truth be told, both are pretty fake.  (Ok, the tree is totally fake.  But I had to make the analogy work, and I think we can both agree it’s a truly impressive one.) As of December 26, the gifts have been given, the food has been eaten, the traditions have been attempted–for better or worse.  And I find that it’s usually for the better, no matter how frazzled I get.  Because despite all my neuroses, Christmas is fun, and funny, and messy and patched-up and not so scary after all.  Christmas really is a wonderful time of the year.

It’s just not the most wonderful time of the year.  That comes the week after–when I ring in the New Year with my sweatpants and The Crown. 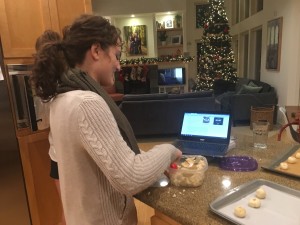 We only baked two batches of cookies this year, both on Christmas Eve, just because it sounded fun to do.  And see the big empty patch on my tree?  I was too lazy to climb that high to repair the kid-decorated damage.  We ditched our traditional ham dinner and had Mexican food instead, courtesy of Costco.  I was too tired to do neighbor gifts so we gave our sweet neighbors hugs as we gladly accepted theirs. (We’re kinda gracious that way.)  Read the Nativity together instead of dressing up for it–as is tradition–because the kids really are, finally and officially, too old.   Ate, played, laughed, lounged, and didn’t worry too much about all the things we weren’t doing.  Best Christmas Ever.