And in my defense, I refer you to my Standard Line of Defense:  It Was All Derrick’s Fault.

You see, last weekend we found ourselves reunited with some of our oldest and dearest friends, Rob and Wendy Sunderlage.  They are supercool, superfun, and superduper nice.  They will not be thrilled that I’m posting about them, but since when do I let my friends’ lousy feelings get in the way of my own self-glorifying agenda?

We have so many great memories with this couple. Derrick and Rob suffered through many an upper-level math class at BYU (usually sitting in the back and then trying to catch up on a semester’s worth of homework during a Hardee’s all-nighter), and  I remember visiting Wendy after she had her first baby–who is now fifteen years old.  We crossed paths again while living in Portland where we shared numerous eating adventures, the most interesting being a dubious dim sum lunch that probably deserves its own blog post.  (Remind me to tell you later.)  We had all kinds of fun dragging our little kids around the city, but then duty called and we moved, and then they moved, and we’ve seen each other less and less over the last few years.  However, last Friday brought us both to Portland on business, and Derrick and I thrilled at the prospect of cramming in as much food and chat as possible into one happy day with these fine friends.  The only thing better than a sunny day in Portland is a sunny day in Portland with the Sunderlages.  Wait.  A sunny day in Portland with the Sunderlages with sugar.  Now you’re talking.

As I said, we like to eat with these people, and now we were all back together again in Foodie Xanadu.  We met some of Derrick’s colleagues from work at Hearth and made it through dinner without incident; it was delectable and, I might mention, completely sugar-free.  But as dinner came to a close the conversation turned from work to food; from food to dessert; from dessert to ice cream, and from ice cream to Ruby Jewels Ice Cream.  We were urged by the locals to hit this trendy little spot on Mississippi Avenue, which is apparently the new heartbeat of all things delish.  What could we do?  It would have been rude to refuse.  And I’m all about not being rude.

I gently suggested (screamed) to Derrick: “Let’s take a break!  Just for tonight.  In honor of our friends.”  To which he calmly (condescendingly) responded,  “Jen, you can do whatever you want.  It will just cost you ONE HUNDRED DOLLARS!”  (Dr. Evil pinkie.)  I refused to give in.  After an hour of listening to his co-workers rave about Ruby’s homemade concoctions, however, Derrick finally threw his hands in the air, ostensibly out of politeness to the Sunderlages (who did not travel 600 miles to slurp sugar-free ice milk from Baskin Robbins) and said to me:

“Done!  But don’t forget, you called it.  You called the truce.  You gave in first.”  I shook his hand crisply across the table, noting that we had plentiful witnesses should Derrick later accuse me of first suggesting the truce.   (I wouldn’t put it past him.  He’s not as earnest as you think.)

“Did not!  You were begging me to call it; I just called it to get you off the hook.  It was totally for you, Jen.”

“Whatev.  You called it.  You did it.  Let’s go.”  The four of us piled into the car and headed to Mississippi Avenue, which is an artsy little neighborhood in North Portland described online as having a “youthful, counterculture vibe.”  It’s true; I swear we dropped ten years just by showing up, although we may well have been some of the oldest people on the street.  (It’s kind of like buying the cheapest home in a nice neighborhood; you gain value by association.)  We bummed around and checked out all the food stands, restaurants, and fun little shops.  It was a warm balmy evening dripping with the aroma of Portland foliage in full bloom.  I, for one, was happy.

Here we are in front of some food stands on Mississippi.  It was a shame we’d already eaten; Wendy swears by the Korean tacos. 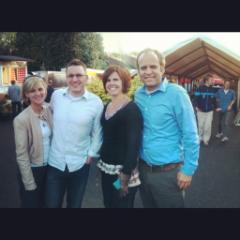 Derrick and I smiling giddily at the prospect of  full-sugared ice cream! just around the corner.  And aren’t the Sunderlages hotties?  Always have been.  (And sorry about the small photo.  Rob snapped this with his phone and then Wendy was kind enough to text it to me.  Of course I’d left my camera and phone in the car; what else would I do when I’m in my favorite city with my favorite people I never see?)

We finally found Ruby Jewels and were not disappointed.  It was happycrowded, fun and spunky inside; the perfect venue for our night of nutritional naughtiness.

We headed (sprinted) to the front of the line and ordered various combinations of Honey Lavendar, Maple, Caramel & Salted Dark Chocolate, and Fudge Mint Flake before anyone could stop us.  Rob and Wendy shared a small dish while Derrick and I each inhaled our own double scoops on huge waffle cones, licking our fingers clean while Rob and Wendy used spoons (spoons!  so pretentious.) The hubby and I then committed to “get back on it” as soon as daylight dawned.  We both agreed that our sugarless pledge would mean nothing if we let the truce carry on any longer.  We had had our fun; come breakfast, it was time to shape up.  We sighed with relief at our renewed dedication just in time to hear Rob–instigator of all things awry–make a crafty little suggestion that I do not believe was without guile.  “Hey Derrick,” he said with a grin, “how about a Voodoo run for breakfast?”

I ask you, my faithfuls:  with friends like these, who needs enemies?  You should know that despite their “foodie” affectations, Rob and Derrick have a long history of talking each other into the vilest of junk food. (I still haven’t forgiven Rob for introducing my husband to Tim’s Jalapeno Chips; I make Derrick sleep on the couch for two nights after downing just one single-serve bag.)  Rob and Derrick have both stayed mysteriously thin over the years with a highly suspect exercise/junk food routine for which I still haven’t cracked the code; all I know is that Tiger Tail, Cheese Puff, and Taco Bell wrappers find their way into our (stinky) car whenever these two get together.  Thus, I should have known that when Rob came to see Derrick, he’d be up to no good.  And as always, Derrick was no match for his friend’s diabolical prowess; we were at the front doors by 7:30 the next morning: I went for the blueberry cake, old-fashioned glazed, and chocolate frosted varieties.  (You counted that right.  I ordered three donuts.  I know.) Derrick and Rob ordered a Captain Crunch and an O.D.B., which stands for an unsavory title that I cannot post here for fear of offending our classier set of friends (none of whom, I’m quite certain, read this blog.)  We ate the donuts in the car and I must tell you, in all honesty, that they were some of the best donuts I’ve ever had.  Forget the trendy grunge locale and creative frostings; Voodoo just makes a darn good donut.  But then again, who doesn’t?  I’ve yet to meet a donut I don’t like.  (Unless you count the Hostess Crumb Donettes Derrick hides in his glove compartment after “seeing” Rob.)

Obligations at home required us to hit the road immediately after Voodoo.  We bid our farewells and promised to get together soon.  Derrick and I had a nice drive home, chatting happily about our time with our friends and enjoying the beautiful scenery through the Columbia Gorge.  Bathed in the warm afterglow of our indulgent weekend, avoiding sugar in our diet didn’t seem so important to me anymore.  I wondered if my husband felt the same.  I walked through the front door and dropped my bag on the floor, confident that Derrick would agree to cancel our ridiculous challenge once and for all.  The truce had been so nice; why end it now?  I was a happier woman with ice cream.  Emboldened by our good moods, I approached Derrick casually as he came through the front door.

“What?  No.  It hasn’t been a full twenty-four hours since the truce…”

“You can do whatever you want.  Make cookies.  Eat them all.  I don’t care.  It will just cost you….”–and I swear he cackled here–“ONE HUNDRED DOLLARS!”

Forget the happy post I just wrote.  Sometimes I hate my life.

8 thoughts on “Derrick called the truce, not me. (Rob didn’t help.)”