It’s no secret that at our house, we struggle with Life.  Adulthood often confuses us, and things that go smoothly for other first-world families are constantly beating us into a messy—and generally expensive—pulp.

I sometimes imagine how dignified our life in a tribal village would be, wherein the Smith Family would no longer be hassled by such trivialities as losing our eight-man camping tent (how do you lose a whole tent?) or locking ourselves out of the house.  (Housewife Coming Home From Morning Run + Garage Door Pin Pad Still Broken After Five Years = Only Grownup Since 1974 to Lock Herself Out of Her Own House.)

Fumbling with such minutiae would be beneath us in our tribal village, where we’d be expected only to kill tigers and sew coats of the skins for our daughters’ dowries.  We’d surely pass as Respectable with only killing and sewing to focus on each day.  (Wait–did I say sewing? Looks like I’d flunk Tribal Village Life too.)

And so it is that our attempt to pack up said Life and haul it across the state has caught a few, um, snags.  Silly us, we thought boxing up the house would be the hard part.  Turns out, that kind of hassle’s for amateurs.  We like to think bigger.  So with five calender days left before the Big Move, we thought of five ways to add a touch of class to our departure.  Class (capital C) is important to us, and I’m guessing it’s important to you too—I mean, you do read this blog, and that makes a statement.  So here’s a few suggestions on how to skip town in style: 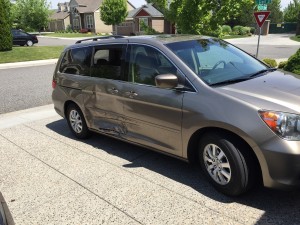 This was just a little fender-bender in the mall parking lot that could have happened to anyone, but obviously had to happen to us.  (To our sixteen-year old daughter, actually, but who’s pointing fingers?)  The car is still driveable, which is a curse in disguise because none of the auto shops could get us in before we moved so we must now drive this badboy to Camas in search of some merciful schmuck to repair it.  The real treat is that the side window won’t roll up, so the local mechanic who did the estimate suggested that until repairs could be made, we do what any classy couple would do:  cover it with cardboard and duct tape. Which means that tomorrow we will be hauling down the Gorge at eighty miles an hour with an enormous gray-and-brown band-aid flapping in the breeze.  After his damning advice, the mechanic laughed—laughed—and said, “Look out Camas, here comes the white trash from the Tri-Cities!” I nodded mutely.  My darkest fears had been given voice.

Saturday night found me, as any legit Saturday night finds me, lying in bed with Cheez-its and Feedly. Flipping through blogs and minding my own biz, I suddenly saw a large drop of liquid slide off of my nose and onto my screen.  I of course bent over to sniff it and determined that it was, in fact, my perspiration.  Touching the back of my neck and the front of my head I, realized I was pouring. How could this happen to a woman with Class?  The answer came when I checked the thermostat and saw that it was ninety-one degrees in our house.   Ninety-One.  That’s the year I graduated high school, not the temperature we’ve sold our first child to maintain around here.  I immediately asked (screamed at) the Hub to Make Everything Better.  White Knight that he is, went out in the scorching night air to tamper and tinker with some box-unit-thingy that held our life’s happiness within.  After much tampering and tinkering he returned with the diagnosis:

He Couldn’t Fix It.

At least not until Monday when the parts store opened up.  I thanked him for trying and then lovingly asked him how the crap that was gonna help me tonight?  He then lovingly responded by telling me I could—well, nevermind.  Let’s just say the evening didn’t go down well.

Nor did the next day, when we hit triple digits again.  Do you know how fun it is to get your ten-year old in a dress shirt and tie for church when it’s ninety-one degrees in your house?  I’ll tell you right now:  it’s not fun at all.  After another steamy (not in a good way) night, I woke the next morning resolved to ditch that hellhole.  And I figured the Classiest thing I could do was:

3.  Spend the day at the laundromat. 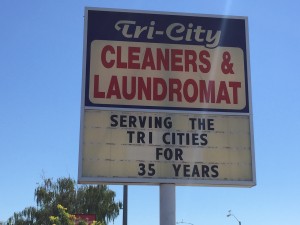 Like any woman of the world, I was instensely excited about a day at the Laundromat.  Watching hours of Golden Girls reruns while pretending to work?  I haven’t had it that good since I used to babysit my sister’s kids.  If it took a hundred-degree house to buy me this luxury, I wasn’t complaining.

But my euphoria waned a bit when I saw that it cost five dollars to wash one load.  Five dollars—just to wash!  I’d always assumed laundromats were the domain of young couples and apartment dwellers, not Wall Street tycoons.  Calculating the projected net cost of my finished loads, two panicked thoughts entered my mind:

4.  Spend the hottest week of the year staring at your empty swimming pool.

Though it’s been warm enough to have the pool open for a month, we decided to put in a new liner before we sold the house, thus deeming the pool unusable til the job was done.  Having ordered the service weeks ago, however, we figured the pool would be ready in plenty of time to throw ourselves the Self-Aggrandizing Going Away Party we’d (obviously) been planning.  But we soon learned that pool boys—and I mean no offense to any pool boys in my readership—are not the most reliable citizens of the subcontracting world.  They’re cool, sure, with their myriad tattoos and long ponytails and—what are those big gross lobe things called?—oh yes, gauges.  They are very cool with their gauges—even pool boys have their strengths.  But apparently repairing pools isn’t one of them.

So we’ve spent our last week at home boiling in our home while looking longingly out the back window at this: 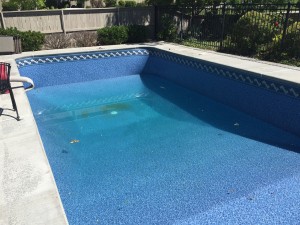 No worries, though.  The PBs said they could have the pool full and sparkling by Friday, just as we pull out of town.  I hope the new homeowners enjoy it.  Which brings me to the last way you can leave town with a touch of Class:

Just leave it sitting there with the store bought For Sale sign out front.  This will impress your neighbors because they’ll know you are a discerning seller, that you’re not just giving this heap away to anybody.  The longer the sign sits and the longer the grass grows, the Classier you’ll look.  Trust us.  We know Class. 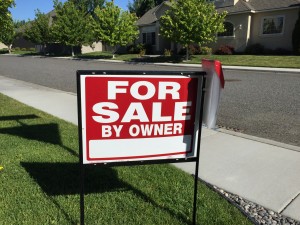