If I read one more article, column, or blog post written by a “Mean Mom and Proud of It,” I may just get a little mean myself.  I’ve tried to ignore this ridiculous new badge of honor that’s been flashing itself all over the internet, but like a bug on my windshield it won’t go away til I pull over and wipe the little tyrant off with my own two hands.  So here goes.

As a mother, a reader, and an Advocate for the Common Good, I have a big problem with these Mean Mom diatribes because:

But the epidemic isn’t limited to the internet.  Over the last decade I’ve watched this “I’m a Mean Mom” mantra spread like a rash across playgrounds and playgroups and PTA meetings and everything in between.  I can’t bring my ten-year old boy to a church potluck without some lady informing me that she is “way too mean” to ever let her son hop across the picnic table benches the way my son is.  (Never mind that the picnic is over and he’s not bothering a soul.  Mean Moms don’t tolerate that crap on any level.)

And if you want to bring the self-righteous set to blows, just say “Tiger Mother” at your next book group and watch the blood spill.  Even the laziest mother will claim to be the next Amy Chua if she thinks that’ll mean that she’s mean.  But Mean Moms are more interested in Chua’s temper than her tactics, because this strange new status symbol isn’t about high expectations for our children so much as it is about telling them Where To Go.  (Which is, of course, the easy part.  Keeping them from Going There is the hard part.  It can be done nicely, but takes a lot longer and is not nearly as fun to brag about.)

Funny, these women call themselves mean—a behavior long deemed repulsive, especially to us nurturer-types—and yet they do so with the grandest of smiles.  For someone who’s apologizing for a character deficiency, the Mean Mom seems shockingly proud of it.

Moms used to gloat about the triumphs of their children, but now they gloat about triumphing over their children.  Instead of a “Johnny got straight As!” we hear “I kicked Johnny off the X-box—again!  He hates me, but I don’t care.”  This bald-faced lie (we care very much if our children hate us) is usually said with a giddy lilt, fingers snapping in a zee-for-ma-shun.  Johnny may have a problem with the X-box, but ain’t nobody gonna tell his mom that she has a problem being mean.

I hate to rain on the tough chick parade, but it seems to me that this whole Mean Mom business is simply a route whereby mothers can forego bragging about their children to brag about themselves instead.  Children show up in the narrative only when they can make their mom look awesome.  And oh-so-mean. 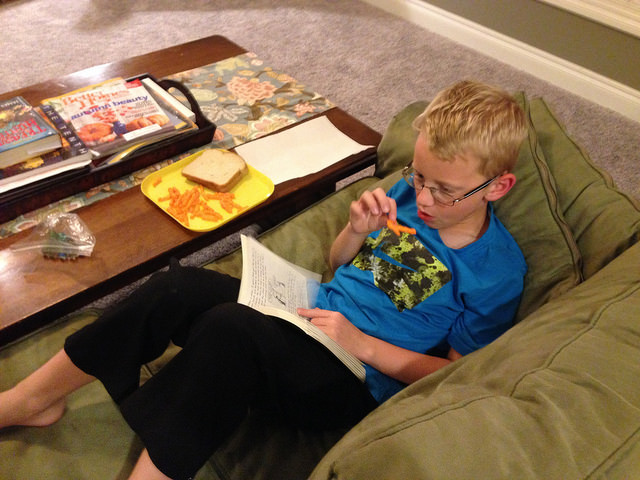 Every Sunday after church I make Ethan a peanut butter sandwich, served alongside a pile of Cheetos, and let him scoot the coffee table next to him while he sits on the couch and reads for hours.  He says it’s his favorite time of the week, but I’ve been told that he shouldn’t be eating on the couch and is certainly old enough to make his own freaking sandwich.  Clearly I’m not preparing him for adulthood.

We could blame our nation’s recent fascination with The Mean Mom on our fear of the new entitlement culture (which isn’t really new) or the success of the Tiger Mother book or our desperation to control something as uncontrollable as our children, but I think that all of those motives are too pure.

Who can be the bravest, the boldest, the brassiest mom on the block?  Who doesn’t take nothin’ from no one?  We will elbow each other out for that prize, the prize that shows the world that we may buy fake tans and fake eyelashes and fake boobs, but dangit, we’re tough!  (So tough that we use dangit as a curse word.)  Moms have competed with other moms since Sarah kicked out Hagar; our modern smackdown just comes in a different package.  If I can’t be a prettier or skinnier or richer mom than you then by golly, I’ll be a meaner one—and by some lame New Age-y logic, a better one.

Instead of bragging about their children, Mean Moms brag about themselves.

The competition is, as always, driven by insecurity.  We talk about ourselves when we need to assure ourselves, and boy do Mean Moms like to talk about themselves.  More than anything, they like to label themselves:  I’m a Mean Mom!  I’m a Mean Mom!  Look at me, listen to me, I’m a Mean Mom!  This labeling is what fuels my Big Problem, because labeling oneself is so contrived and so embarrassingly self-aggrandising, kind of like referring to yourself in the third person.  (“Oh yum, Jen just loves tomato chutney!”  Try that at a dinner party and see if you’re invited back.)  People who have to tell you what they are, probably aren’t.

I have no beef with strict parenting; that’s good common sense that’s as old as parenting itself.  What I do take issue with is this newfound need to brag about it.  So go ahead, ladies—serve that broccoli, enforce that bedtime—but don’t imagine that you’re the one who invented these measures, and don’t imagine that others are interested in the fact that you’ve taken them.  Above all, please don’t imagine that any of it qualifies you to be a Mean Mom.  Strict mom, sure.  Invested mom?  You bet.  Deliberate, watchful, consistent, disciplined mom?  Noted.  But not mean.  Because if you have the time and the affluence and the freedom to sit down at a computer and write a blog post about how mean you are, then I’ll bet my whole box of junior mints that: