A few weeks ago, I sat in a room full of mothers who shared a common misery:  we all had a dog.

Just minutes earlier we had been chatting happily about the Joys of Our Children at Christmas, but that convo had quickly spiraled down into the Hassle of Our Kids at the Holidays.  This topic naturally morphed into a heated discussion about Kids and Their Dogs–and the mothers who are guilted into buying the second for the first.  We went around the circle, complaining about our respective canines in turn, interrupting each other just enough to point out that each of us was, in fact, faring worse than the others.

“Your dog chewed up your Uggs?  Big deal–mine chewed up my laptop.”

“Your dog pooped on the tile?  Big deal–mine peed on the carpet.”  (Try cleaning that up.)

“Your dog jumps up on strangers?  Big deal–mine sniffs the crotches of strangers.”  (Excuse the vulgarity, reader, but is there any other way of putting it?)

The final consensus among the group was:  My Dog May Be Worse Than Your Dog, But Boy Do We All Have It Bad.  Listening to the collective commiseration, I wondered how, and why, we’d each allowed ourselves to be trapped in this perverse situation.  None of us had ever wanted a dog and yet somehow–though we were the mistresses of our homes and the masters of our destinies–we’d all ended up with one.  Worse still, each and every one of us had been warned, emphatically and repeatedly by our fellow mom-dog-victims, about the demise of a female’s dignity once that key was turned.  Man’s Best Friend?  More like Woman’s Worst Enemy. 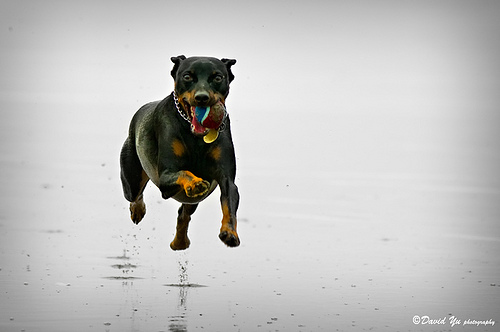 So, though we complained bitterly against this new lot in life, we couldn’t say that no one told-us-so.  Many people had told us so, we’d just refused to listen.  Each one of us had been certain, after hearing our our forebears collective tales of woe, that our dog experience would be better.  Our kids’ were more responsible, we’d told ourselves in smug silence.  Our marriages were more functional, our characters more robust.

And, most importantly, [sociallocker id=”9134″]our tenderhearted little tots really really wanted a dog!  Much more, we were sure, than did our neighbor’s kids (who were kind of brats and wouldn’t appreciate it anyway.  Don’t pretend you haven’t thought it.)  We’d list these reasons for our anticipated success–in the politest way possible–to our dog-owning friends, only to hear their standard reply:  Don’t do it.  I’m telling you, don’t do it.  The angrier moms would follow up with, Look at me!  Look into my eyes!  Just look at what that dog has done to me!

Look into my eyes! Just look at what that dog has done to me!

We’d then smile and say, Ok.  Well, we’re still thinking about it.  And the crazed and furious friend would roll her eyes, cross herself, and turn and walk away.

And six months or a year or two years later, we’d find ourselves sitting in what was supposed to be a lighthearted womens group but turned out to be an Angry Dog Mom Support group.  Why?  Because we’d refused to listen.  For countless millennia, mothers have been warning other mothers against getting a dog, and for countless millennia, the other mothers have been ignoring them.  Moms Considering a Dog are like reckless teenagers who, heedless of their parents’ wise counsel, need to make their own mistakes.  And make them we had.  And angry we were.

Except for one of us.  Amidst the weeping and wailing and gnashing of teeth, amidst the sound and the fury of having to pretend to be a “animal lovers,” one woman sat, quiet and smiling, on a plush chair in the corner.  As our lamentation eventually exhausted itself, the room became silent and all eyes settled on her.

“What are you smiling about?” We practically yelled it at her.  She responded with the calm  mother-dignity that the rest of us had long since forfeited.