Last Saturday I took my dog, Maude, to her first obedience class at Petco.

Wait.  Did I really just say that out loud?  Because if so, I can now add it to the growing list of things I Swore I’d Never Say, such as:

But life plays funny tricks on us, and no trick is funnier than that of a canine-loathing young woman who, with the onset of age and children, morphs into a Devoted Dog Mom.

And so it was that last Saturday–a brilliant August morning ripe with sunshine and possibility–I did not enjoy a late summer jog followed by a late summer swim, nor did I water my flowers and pretty up my porch.  Rather, I used that bright morning to enter a dark world from which, I suspect, there may be no returning.  Because, see, you don’t step through those sliding doors at Petco with your dog on a leash and pretend to be a casual pet owner.  The minute you’ve buckled Lassie into the car and driven her to the store as if that’s a normal thing to do, your days as a casual pet owner are over—and with it, any semblance of coolness in which you’ve ever staked a claim.  (Although, let’s face it, I think that ship sailed with your first soy sausage.)

Casual pet owners pick up a bag of Kirtland dog food from Costco once a month; Devoted Dog Moms bring their darlings shopping with them–to a specialty pet store, natch–and would just as soon own a cat (!) than buy a supersized bag of no-name food from a warehouse club indifferent to the needs of their precious pup.  (I mean, like Costco knows anything about dogs.  Buying dog food there is like getting a manipedi from Walmart.)  (Which I have done.)  (But am not proud of.)

Casual pet owners do not sign up for twelve-week obedience training courses that require them to spend three months of Saturdays contending with Rocky the Evil Boxer and Opie the Whining Daschound, along with their respective owners.  It’s enlightening (read: disturbing) to find truth in the old saying about owners looking like their dogs, but true it seems to be.  Rocky and Opie are the canine clones of their masters (mistresses in this case): one dark and brooding, the other fair and flustered.  It’s uncanny, and I can’t pretend that I am the single exception to this rule. So the fact that Maude is a large furry dog with curly black hair confuses me somewhat.  We must look alike, but how?  Is our dog/owner similarity in the eyes, the nose?  The breath?  Wait…Maude has terrifically skinny legs and buttocks.  Could it be?  Oh please let our similarity lie in the skinny legs and buttocks!  Imagine what that would mean for me.

Back to last Saturday:  after Rocky, Opie, Maude, RockytheHuman, OpietheHuman, and I waited fifteen minutes for the dog trainer to show up (dog trainers have lives too, you know!) we were greeted by a boisterous woman who put us all in “the ring” with our pets.  The Ring was a corner of the store partitioned off with corrugated cardboard bearing the Petco logo and was, we soon learned, a place of privilege.  One did not reside in The Ring unless one was worthy—which is why Rocky and Opie had to be taken out of the ring, repeatedly, for their gross misbehavior.  Every twenty seconds or so, Rocky growled and lunged at Maude, with the apparent intent of tearing Maude’s head off.  Opie whinnied and cried every time Rocky tried to eat Maude, obviously scared even though she was not the one under attack.  (Opie must be very empathetic in nature.)  So out went Rocky for attacking and out went Opie for whining—along with their owners, who were also required to leave The Ring until order was established.  This scene played over and over, like an endless 8-track loop, for the duration of the class.  But despite the dire and repeated consequences, Evil and Whiny refused to behave.

But.  Guess whose dog never had to leave The Ring once?

Guess whose dog sat at her master’s (mistress’) side, looking cute and contented, throughout the entire class?

Guess whose dog received multiple bacon treats for being such a good, good girl and even earned the coveted title of sweetheart from the Boisterous Trainer? 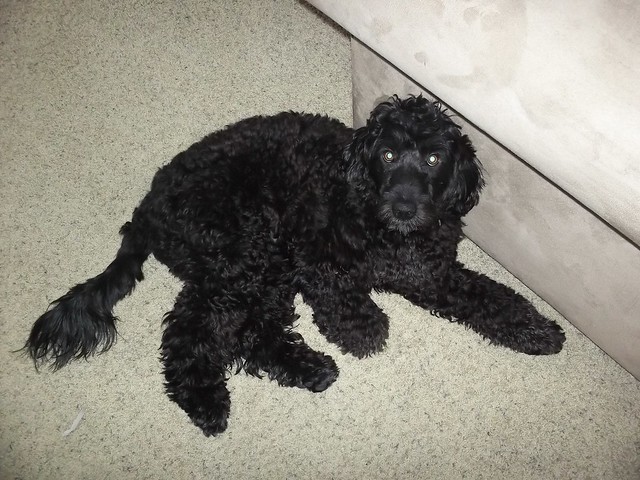 And I don’t mean to brag and make you all jealous—really, people, that is not my intent here—but:

A sentiment which will now be added, in bulleted format, to the growing list of Things I Swore I’d Never Say.

Buying dog food at Costco is like getting a manipedi from Walmart.