Tonight I went to bed at ten o’clock with full and virtuous intentions of waking up at five o’clock the next morning.  Instead and inexplicably, I woke up at two o’clock (a.m–ugh), eyes wide open and mind ablaze with some pretty hefty internal dialogue.  Such as:

1.  How my dumb dog downstairs knows, with some weird canine intuition, that I’m awake up here, and is now barking from his kennel, soon to wake up the whole family.

2.  How I now have to heave my sleepy self off this chair and go down to silence dumb dog.  (i.e., whisperyell:  Shut up, Maude!)

3.  What an astonishing mess my house is.  And how I’ve been lying to myself all these years, thinking I was a “good” housekeeper with an occasional setback.  The setbacks are no longer occasional, and they are winning.  The exception is becoming the rule, the Servant becoming the Master.

4.  How disgusted I was to see, at the grocery store today, People magazine’s latest “Special Collector’s Edition” dedicated to–who else?–Miley Cyrus.  They called her a “beautiful rebel” and spent the entire glossy volume singing praises about her fabulous haircut (really?), her fabulous wardrobe, and her fabulous “new attitude!”  Funny, I thought that New Attitude was just the Old Attitude, wrapped up in a new, barenaked booty.  (A new, barenaked booty comes arrives on the female music scene about every five years.  It doesn’t take much talent, just a booty, and some barenakedness.)  And don’t you just love the media whitewashes the booty-barers and their booty-baring when appeal to a mass audience is suddenly deemed necessary?  Here is the girl who’s brought soft porn to the small screen, but People, as far as I could tell, paid little attention to that.  Instead, “Mad for Miley!” was splashed across a wholesome looking, fully clothed Cyrus, with captions like “Every outrageous, tongue wagging moment!” beneath.  And don’t you just also love how degrading behaviors are now euphemized with words like “outrageous!” “irreverent!” and (my fave) “naughty!” ?  As if being described with such words is something to be proud of in the first place.  Though many decry Cyrus as a bad role model for young girls, I believe this assessment is too complimentary.  Why lend her the credence of a “role model?”  I don’t dislike Miley Cyrus because she’s a bad role model for young girls; that’s too limited.  Were there no young girls around anywhere, I’d dislike her because she’s a bad, dumb person putting bad, dumb things into our good, smart(ish) world.  Desperate and mediocre, she should be labeled and pitied as such, not given her own “Special Collector’s Edition” of People.  (Not that that’s much of a distinction.  People’s about a half-step above the celebrities they cover.)  But whatev; I’ve spent way too much of my snooze time talking about Miley Cyrus.  She got my goat and took up space on my blog, so I guess the joke’s on me.

5.  How excited I am about the kitchen chairs my mom helped me re-cover today.  It only took me three years to get this ninety-minute project completed.  Somehow, I blame the dog.  (Or Miley Cyrus.)

6.  How updating my chairs has inspired me to update a few more things around the house for spring:  lighter curtains and pillows in my bedroom, flowers on the porch, perhaps even–dare I wish it–a new welcome mat?  I feel a trip to Target coming on soon (I have a sense for these things you know) and truth be told, the anticipation of that is what may be keeping me up tonight.

7.  How I am supposed to meet my running partner at the track in three short hours, after having slept only four short hours.  And how, though she’s wonderfully nice, it would be poor form bail on her.

8.  How, no matter what I eat or how much I run, I am still, always and forever, going to look like me.  And what a damning and liberating revelation that is.

9.  How good Jhumpa Lahiri’s new book, The Lowland, is turning out be.  And how reading Jhumpa Lahiri must be like taking a long draw of heroin, it’s so calming and addictive.  (Do you “draw” heroine?  That was a guess.  Ask Miley.)

10.  How I refuse to put an image of Miley Cyrus in this post, although it would be on-topic, and will instead insert an image of Jhumpa Lahiri.  It won’t get as much traffic, but at least I’ll be able to sleep at night.  (At some point, I hope.) 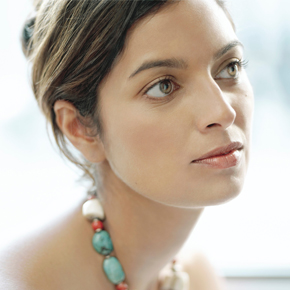 Isn’t she beautiful?  And so talented.  No, gifted.  (Unlike somebody else we know.)

10.  How Miley Cyrus, when those two knots are twisted atop her head and her tongue is “wagged” out, looks eerily like the devil.  Like, for real.  Is it on purpose?

11.  How I am ready, now that I’ve vented, to stop talking about Miley Cyrus altogether.  Promise.

12.  How beautiful the movie In America was.  Have you seen it? It’s older (2002) but for some reason it’s beautiful-ness popped into my head as I was lying awake tonight.  Maybe because the female lead in it has super short hair like Miley Cyrus.  (oops–did it again.)  But she’s pretty and nice, and doesn’t have a tattooed kitty on the inside of her lower lip (as far as I can tell), so don’t worry.  At any rate, see this movie if you haven’t.  Outstanding.

No matter what I eat or how much I run, I am still, always and forever, going to look like me.

13.  How I spent two hours today sitting in my daughters first Drivers Ed class, wondering how life ever got us here.  And how my mother, through a fake smile and forced giggle, suggested that I don’t take my daughter out on any of her drives.  Apparently, my mom thinks the roads should be spared another driver like me.  She claims that in a few years I won’t get off with so many warnings for my speed, um, issues, but I say that as long as there’s Botox and hair dye, bring it on.

15.  How, now that it’s 3 am and I’m still awake, I am most definitely going to bail on my running partner in two short hours.  And how, no matter how many times she might ask, I will never, ever be running partners with Miley Cyrus.  Just ’cause.