Don’t ask me what this book is about, because I’ll answer you all wrong.  I’ll try to explain how a young woman, Ursula, is born into a wealthy English family and is allowed the rare privilege of living and dying and living again until she “gets it right.”  And that will make the book sound tedious and confusing–like Groundhogs Day in print–and then you won’t want to read it and you’ll miss out on a fantabulous literary experience and it will be all my fault.  And really, between my looming pile of laundry and the king-sized Twix I inhaled while writing this, don’t I have enough to feel guilty about? 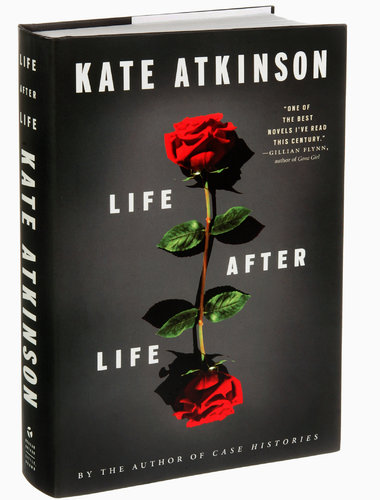 Life After Life is, for lack of a better phrase, just kind of about everything.  Choice, consequence, survival, selflessness, selfishness, love and the lack thereof.  All of this takes place against the backdrop of World War II—London during the Blitz, Germany during Hitler’s rise to power, or the English countryside during both—depending on which version of Ursula’s life we are witnessing.  (My favorite version is the one wherein Ursula becomes BFFs with Eva Braun.  Talk about an audacious author.)

When asked, Kate Atkinson said Life After Life is mostly about “being English.”  But I thought the book was also very much about family, as Ursula is born into the same stable but imperfect one over and over again, and every road she takes leads her, ultimately, back to them.  Through the failures and triumphs of her varied lives, Ursula’s family remains the one constant.  The book doesn’t beat us over the head with this idea; it’s just there, like a welcome warmth through the sometimes chilly pages.

This book is unique and fascinating and superbly written, and it challenges the reader in a good way.  I read more for mood and impression than a linear plot line, so this book worked for me.  I’ve been meaning to read Atkinson for a long time, and now I understand what all the hype is about; whether or not you like the mechanics of this novel, her writing is just fantastic.

p.s.  In the interest of full disclosure, I thought you should know that I will be attending a “Harvest Bazaar” this weekend.  It will be the first craft show I’ve attended in at least fifteen years, and the first craft show I’ve attended willingly in my entire life.  (My mom and sisters used to drag me every year.  It was almost as bad as going to the fabric store.)  I even called up my super-crafty sister and invited her.  I invited her!  I feel like Ursula, waking up to an alternate reality.  Maybe choosing to visit to a holiday bazaar is my way of finally “getting it right.”  (Oh gosh, I hope not.)

[Tweet “Life after Life is unique and fascinating and superbly written.”