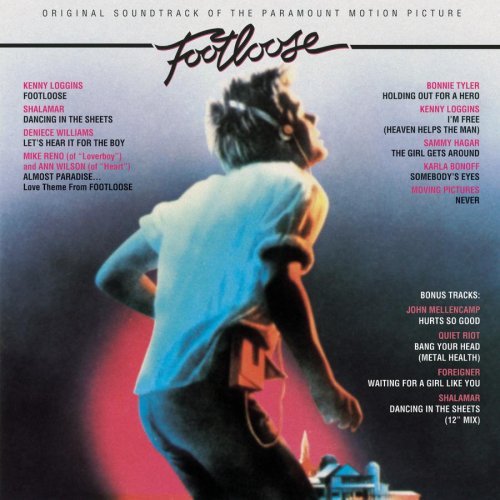 I remember watching this movie in the theater when I was in the fifth grade, then coming home and singing “Now I gotta cut looose!” as I jumped off the back of my dad’s pickup, kicking up my white sneakered heels before landing on the ground in the prone position.  From here I’d roll directly into a driveway somersault and finish with my hands spread magnanimously to an imagined audience, a la Willard at the end of his triumphant learning-to-dance scene on the farm.

Do you remember it?  Do you love it?

A quick aside before I explain what Footloose has to do with Dracula: Many years after my front-yard dancing, I watched this movie on video and could not believe it had been such a tightly woven thread in the fabric of my ten-year old mind.  I would never let my kids watch it today.  Terrible language.  Terrible morals.  Tons of smoking and drinking.  Parents were idiots, religion was idiotic, teenagers knew best.  Bad messages, all.  But–I said it then and I’ll say it now–it was so geeood!  Who could resist?  Even a ten-year old girl appreciates Ren dragging on a cig by the side of his VW, frustrated by the aging imbeciles seeking to opress him.  I could fully relate:  my parents wouldn’t even let me quit my paper route. Okay. So in one of the movie’s best scenes, Ren is hauling wheat (?) in the factory when Ariel walks up to him, bends her long cowboy-booted leg to rest on his stack of bags, and dares him to meet her boyfriend, Chuck, on “his daddy’s farm.”  In a fashion we’ve come to expect at this point in the film, Ren never loses his cool. 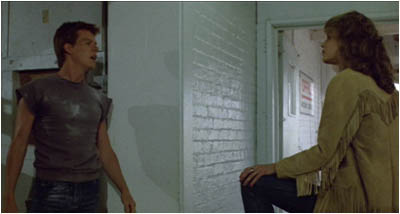 Ariel:  “People will know you’re skeered.”  This is how she pronounces it.  Skeered, not scared.  “Anyway, Chuck will find you.  You want that?”  She then whips around in her skinniest-of-all skinny jeans and struts away.  Oh, how I wanted to be Lori Singer! (Still do.) (I’ll bet she’s nice.)

So my sisters and I decided, roughly three decades ago, that skeered was the word we would use when we were super-duper-scared, not just light- or medium-scared.  It worked.  And it stuck.  Skeered has been and ever will be the Christensen Female’s all-purpose go-to word to enhance one’s expression of any extreme anxiety or terror.  (In my family, instead of expanding our vocabularies, we quote movies.  This saves us a lot of trouble.)  For example:

Age 11:  “I’m skeered to wear these gym clothes Mom sewed for me to PE!”  Turns out this fear was justified.  Middle schoolers are not known for showing mercy.

Age 14:  “I’m skeered that when Doug finds out I stole another one of his enormous, block-print sweaters from The Bon to wear over my stretch pants, he won’t drive us to the stake dance this weekend!”  For those of you unaware, Doug is my older brother by four years.  He was an eighteen year old boy, I was a fourteen year old girl and yes, I was stealing his winterwear.  The sweaters were baggy on him, so you can imagine how flattering they were on my prepubescent frame, especially over light-blue stretch pants and bunchy yellow socks.  (Where, for the love, was my mother??)

Age 2o:  “I’m skeered of my new roommate!  She: cooks stinky food/leaves gobs of hair in the tub/has a boyfriend from home who looks like “The Fly”/sleeps all day every day/swears that Beauty and the Beast (Disney version) is her favorite movie of all time!”  (Pick one.  I had them all.)

Age 27:  “I’m skeered to eat these mussels!”  One evening in our early married life I steamed fresh mussels and served them over linguini in an attempt to dignify yet another home-cooked meal.  It looked so elegant in the magazine.  I followed the recipe to a tee and watched in horror as the mussel shells opened up slowly…ever so slowly…hissing out angry steam along with the smell of a tuna-glazed gym sock.  Derrick, who was famously generous with his praise for me in the kitchen, stood quietly behind me and watched the unveiling.  He then rested his chin on my shoulder and softly whimpered in my ear…”I’m skeered!”  (Turns out this fear was justified, too.  They were Nast-O.)

Age 37:  “I’m skeered to finish Dracula!”  At the suggestion of a few friends, I am ringing in the Halloween season this fall by reading the greatest goth horror book of all time.  (Nice way to sidestep the darker side of the holiday, don’t you think?)  At first I looked forward to reading this novel, figuring it would be old and hoaky; scary “for its day.” At the very least, I thought, I’d finally get a glimpse of a genre I had heretofore avoided, and thus broaden my understanding of nineteenth century literature as a whole.  It would be an interesting little read, I thought.

Seventy-five pages into it, and I am terrified.  Terrified.  It’s sitting over there in the living room right now, on the little table by the couch, the dark face on the cover staring up at me with those horrible red eyes.  I’ll admit that I’m curious–intrigued, even—by this book.  The writing is fabulous.  I want to know what happens next.  I want to know if he makes it out alive.  There’s just one problem:  I’m skeered!

Which is why I’m writing a blog about Footloose tonight instead of reading Dracula, like I’d planned to.  I don’t want to fall asleep and dream about the Count in the creepy castle.  I want to dream about Ren: kissing Ariel after she gives him the music box, beating up Chuck outside the dance hall, rendering the Reverend speechless at the town meetin’ when he quotes scripture to make his case for dancing.  (Don’t tell me this movie’s not deep.)

In fact, now that I’ve thought about it, Footloose is a classic in a genre all its own. (We’ll call it Crappy Trash that Molded the Young Minds of Generation X.)  So the way I see it, if I’ve studied this particular genre in all its varieties, why trouble myself with a genre that includes the likes of Dracula?  A genre’s a genre; that’s all I’m sayin’.  Brahm Stoker vs. Kevin Bacon?  We’ll call it sixes.  And at least Kevin won’t leave me skeered.

19 thoughts on “Skeered of Dracula”