Okay, I’m not going to ask you to look at pictures of my kids in their halloween costumes. But I am going to ask for the next five minutes of your life as we discuss some Trick-or-Treating rules that I have, through my years of being the candy-passer-outer, decided should be honored by all who knock on my door on October 31st between 6 and 9 pm.

Trick-or-Treating Rules That Should Be Honored By All Who Knock On My Door On October 31st Between 6 and 9 pm.

1.  Trick-or-Treaters over the age of fifteen will be denied candy.  A student i.d. card and/or birth certificate will be heretofore required before Fun Size KitKat is dispensed. 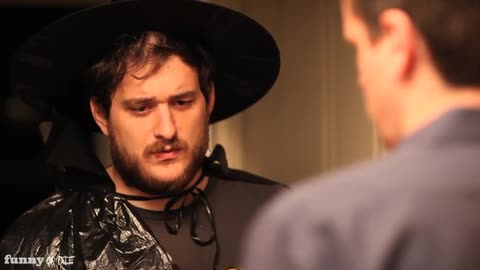 2.  Trick-or-Treaters bearing exposed chest hair, yelling “trick or treat!” in a deep voice, and weighing more than my husband and me put together will–despite all protests to the contrary–be assumed to exceed the Trick-or-Treating age requirement and will thus be denied candy.

Castle will be denied candy.  (Castle is an adult “superstore” which I have never been to but I understand sells–ahem–saucy Halloween costumes.  I think we saw some of them parade across our porch last night.  Wish I was kidding.)

Trick-or-treaters wearing costumes purchased at Castle will be denied candy.

4.  Trick-or-treaters over the age of fifteen who are wearing a hoodie zipped up with the  drawstring pulled tight to cover the lower half of his/her face, will be denied candy.  (This does not constitute a costume.  Nor does it hide the fact that you are over fifteen.)

4.  Trick-or-treaters standing behind the cute small kids on the porch, presumably as their mothers, who then step forward at the last minute with a candy bag and a “trick or treat!” of their own–thus revealing themselves not as mothers, but older sisters/aunts/cousins/random female acquaintances–will be denied candy.

5.  Said sisters/aunts/cousins/random female acquaintances who hold out a second candy bag and inform me (without smiling) that “there’s a baby in the car,” will be denied candy.

6.  Said baby in car who is too small to walk, talk or pass solids will be denied candy.

7.  Trick-or-treaters who, after receiving one piece of candy, continue to hold out their bag, shaking it for more, will be denied a second piece of candy.  Ask a third time, and I’ll take back the first.

9.  Trick-or-treaters who are young, in costume, say thank you, and seem happy and excited about Halloween night will be granted access to multiple pieces of candy.  (The good stuff.  I’m mean, but not cheap.)

Now lest I’ve misrepresented myself, you should know that I actually love Halloween.  I love the pumpkins and the parties and the cute kids in costumes.  I love passing out candy and seeing the darling little faces made up as pirates and princesses; I love chatting with my neighbors as they flow across my porch and lawn (which, by the way, I couldn’t care less if kids cut across.  It’s just nice to hear their parents tell them not to.)  I know Halloween is supposed to be a gaudy, garish, free-for-all, and I’m a big fan of gaudy, garish free-for-alls (come shop with me at Ross sometime.)  However, Halloween has reached the point wherein the bottom line is the Bottom Line, and someone has to speak up for those of us swiping our debit cards.  Halloween Candy in 2013 costs the earth, and I want to give it to cute, costumed kids who are excited by the magic of the evening, not teen moms with a “baby in the car.”  (Not that I have anything against teen moms with babies in the car.  That is not the statement I’m making with this post.  Oh nevermind, let’s just not go there.)  My Trick-or-Treating Rules may be out of fashion, but my purchasing power is not.  In short:  she with the candy makes all the rules, they who want the candy must follow them.  If that makes me seem a little uptight and stingy, just remember:  on the 31st of October, I’m under no cultural mandate to be charitable.  This ain’t Christmas, hoodie boy (man.)