Doesn’t that seem like a lot?  Maybe for some people, but hey–I need ’em.

I love making lists of any kind:  to-do lists, grocery lists, music-I-need-for-my-iPod lists.  Lists give me a sense of anticipation and a psuedo-sense of accomplishment (which, admittedly, is sometimes as far as the accomplishment goes.)  But my favorite lists to make are about self-improvement:  things I want to do and the person I hope to become.  It’s gratifying, and fun, to dream on that piece of paper.  So as you can imagine, I’m a big fan of New Years Resolutions.  It’s like an institutionalized excuse to spend several hours (or days or weeks) making lists that are all about, well, myself.  Sign me up!

As with every year, I began my list intending to Keep It Simple, an aspiration manifested by the friendly, fourteen-point font that I use.  (I figure the bigger the font, the more the words will leap out and motivate me.  It’s not an exact science, but I can offer testimonials.)  It started innocently enough:

I wanted (needed!) to get back in shape, I wanted (needed!) to exercise more patience with my family.  These were worthy goals, but as I hammered away on my keyboard I thought, as I always and tragically tend to think:  I should do more.  If a little patience in my character is good, then a thoroughly refined character is better.  Next thing I know, I’m adding words like humility and empathy to my long list of Improvements Needed.

And if working out three days a week is good, then working out five days a week–no, six!–is better.  (And wow could my jolly holiday tush use it.)  And so the six-day exercise regime–along with a diet outline and motivational tips–are typed into subcategories beneath my formerly simple plan of working out only three days a week–a naive goal which now embarrassed me.  My sights were soaring and it my fourteen point font was soon reduced to a twelve, and then a ten, point size.  (See, it all needs to fit on one page so I can print it out and tape to my closet wall, where “the goals” can work their magic on my subconscious every single day.  No better time to remind yourself to “work out six days a week” than while you’re pulling on Spanx in front of a full-length mirror.)

No my blood was really starting to flow.  I’d set a physical and emotional goal, why not shoot for something mental?  Okay, this year I’ll write more.  No, I’ll write every day, including Saturdays.  No, wait–Sundays too–don’t be so lazy!  I punched the words into my keyboard, watching with satisfaction as my jet black instructions took form on the blank white screen.  The reprimand felt good.

My fingers hovered as my mind scoured about for more shortcomings.  Let’s see…in what other areas was I failing?  Oh yes, of course–spiritual.  Okay:  family scriptures, every weekday morning.  No, every morning, don’t be so lazy!  Kids at the table, 6:45 sharp.  And family prayer every weeknight–no, every night, or else why even bother?  Consistency is key, mom–I know it’s your weak spot, but too bad for you.

And what about my temporal goals?  Where to start with them?  Detailed chore charts (morning/evening/daily/weekly) and an exhaustive list of home improvement projects (repairing/organizing/decorating/de-junking) flew off my fingers before I could form them into sentences.  My panic rose with the number of exclamation points I was using:  Organize the crawl space under the stairs–permanently!  Slow down and listen to people!  Learn how to do family history–THIS year! Stop running late all the time!  Oh, this was grand. It was like taking a wet vac to my sloppy insides, sucking it all out for an overdue cleaning.  I needed it.  I deserved it.  Didn’t I? 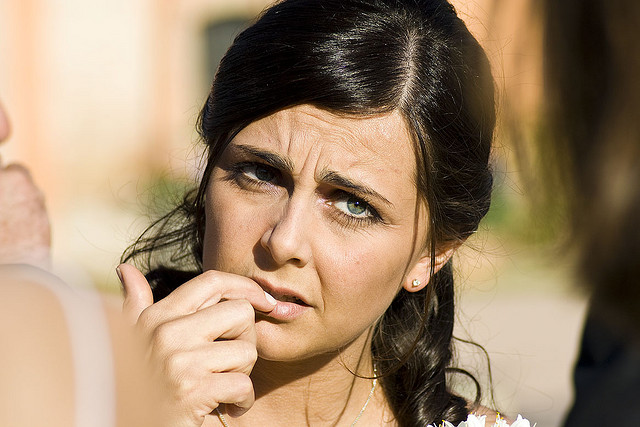 Actually, I didn’t.  None of us do.  We don’t deserve the self-flagellation* that hyperbolic goal setting can give us.  I think it’s a cross between a Love of Lists and a Hatred of Self.  Okay, so I don’t exactly hate myself.  But I am hard on myself.  And I bet you are too.

We don’t deserve the self-flagellation that hyperbolic goal setting can give us.

I remember a few years ago in early January, after hours spent perfecting one such New Years Resolution list, I flopped down on the bed next to my husband and explained to him, point-by-point, all the things I was going to do to Truly Improve Myself and Become the Person I Was Meant To Become.  When I was finished (after a long while), I took a breath and met his eye.

“Honestly?  I think there’s something you could add to that list.”

“Really?”   I shuffled through the categories in my head–physical/spiritual/emotional/mental/temporal–yep, all covered.  What was he talking about?

“Why don’t you set a goal not to be so hard on yourself?”  This sounds a bit trite, but he was sincere.

And so am I.  Set a goal this year to do your best–or maybe, like, 85 percent of your best, whenever you can–and after that, set a goal to not be so hard on yourself.  Each new year reminds me that I am (and you are) getting older at a rather alarming rate.  Now we are the Selves we’ve spent a lifetime creating, and it would be a shame if we missed out on them because we were so busy planning our Next Selves.  A new year can motivate us to improve, but at the end of that year, you are still you and I am still me.  And guess what?  We are becoming the Person We Are Meant To Become.  We’re just doing it slowly–one, not eleven, resolutions at a time.  And it’s the slow stuff that sticks.  So this January, when you look forward to a new year of new possibilities, be sure to look back at the all the  good things you’ve already done–are already doing–and congratulate yourself on another year well lived.  That, you deserve.

*On on of our first dates, I used the term “self-flagellation” in a story I was telling my future husband.  He unwittingly thought I’d said “self-flatulation” and had a tremendous, fourteen-year old boy laugh over it for many, many years.