Last week, I went to a BYU football game with my husband.  It had been awhile, and walking into the stadium was like walking back into Youth:  the music, the crowds, the chipper announcements crackling over the chatter of fans, the sweet, heavy smell of ketchuped hot dogs and sugary churros and fake-butter popcorn.  Weaving our way through the maze of people as we climbed the stairs to our seats, I was almost in my happy place. Almost.  Because though I always love the buzz of a Big Game, a Big Problem loomed over this otherwise magical night, and will likely loom for the duration of my time here on earth.  It’s private and it’s shameful and I don’t like to talk it about it, but here it is:

I don’t understand football.  At all.

I think that’s an important distinction because I see many women roll their eyes and tell me they don’t like watching football with their husbands, but I’m always left with a vague suspicion that they at least understand the game.  I nod and agree and we laugh at the silly world of men who care about such things, but inside I’m wondering: are you one of those women who understands the rules, who knows when to cheer, who doesn’t have to ask your husband (again) what just happened?  I want to ask these women how/what/who/why–how they came to understand football, what the H is happening, who the H is winning, and why anybody on God’s green earth cares. But I’m too scared to ask because there’s a high probability that I might look kinda, well, dumb.

I think it all goes back to my fear of math.  Shocking as this may sound, I am slightly (enormously) right-brained.  Math confused me almost as much as football does, and both seem to be the brainchild of logic—which is something I do my best to avoid.  So when I look at that green field with those white-chalked stripes the post-traumatic stress of my harrowing high school math career comes spiraling at me with the speed and venom of a Tom Brady pass.  (I know who Tom Brady is—he’s mass hot and I’m obsessed with his wife.)  I’m looking at a football field but what I’m really seeing is a homework assignment: I see a grid (graph paper), numbers counted by tens (binary system), and a scoreboard displaying a perplexing array of letters and digits that mean nothing to me (x+y = whoknowswhat.)  Actually, I do understand two things: HOME and GUEST.  I’ve got those two down—but I still don’t understand the meaning of DOWN.  (“Down” to what?  Plus it’s weird to use a verb as a noun.) 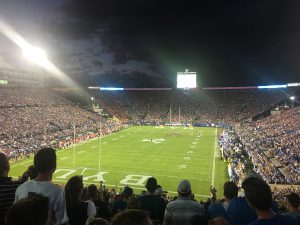 Listen, I’ve tried.  I’ve watched, I’ve listened, I’ve squinted to see who has the ball and which way they’re running down (up?) the field.  I’ve asked my husband—over and over and over—what is happening. (This is great for our relationship. He loves it when, two minutes into the game, I start turning to him every time the crowd roars and yell loudly and directly in his ear, “WHAT JUST HAPPENED?”  After having explained it to me, in patient and explicit detail, for the past twenty-four years, he’s only too happy to explain it again.)

I’ve even googled “Rules of Football” before going to a game in hopes of saving my marriage.  But to no avail. Because though it makes perfect sense on google, the game makes no sense once I’m seated in the stands.  From there, I can only hear a whistle blow and see a bunch of guys pile on top of each other before they’ve even moved an inch down (up?) the field.  How am I supposed to know what’s happened when they keep stopping before it’s even happened? How am I supposed to know who’s doing what when everyone down there looks exactly the same–the same uniforms, the same helmets, the same pads, the same beefy calves?  And even if I could figure out what happened, how am I supposed to know if it’s good or bad when I can’t see the expressions on the player’s faces? How can I tell what they’re thinking and feeling—what I should be thinking and feeling?  Where is the connection, the empathy, the pathos for crying out loud?  I have to wonder:  who made this game up and what language did they speak?  Certainly not the language of the heart.  I mean come on.

You may wonder why, after years silence, I’m offering this confessional now.  Well let me tell you, it isn’t really about football.  It’s because lately I’m realizing that my confusion over football might be indicative of a general confusion about the world in which I live.  I often notice that the people around me are exulting or despairing over things I don’t understand and just can’t quite seem to care about:  hot yoga, the China trade war, CBD oil. (Is it pot or not? Help me people.)  And yes, football.

Look, I get it:  I don’t understand this stuff because I don’t care about it, and I don’t care this stuff because I don’t understand it, and I could bring this whole circular dilemma to a halt by spending just a few minutes studying and solving said mysteries. We generally enjoy things we feel competent in. So a first step to enjoying football might be trying harder to understand it.  (This probably holds true for enjoying yoga and CBD oil. The China Trade War? Well.)

The problem is, I just can’t care enough about football to care that I don’t understand enough to care.  And so I remain stuck in my Circle of Confusion. But really, it’s not such a bad place to be.  It holds such pleasures as smelling the popcorn, hearing the band, and watching Cosmo slide on a long blue tarp between downs.  (See what I did there?)  There’s a lot of fun in ignorance.  Plus, if I stay confused I can stay apathetic, which rids me of unnecessary angst over who’s winning and losing.  My life is wrought with enough drama; why add to it the despair over a lost football game?  Shoot, I can barely handle the China Trade War.  (Or is it a tariff war? Help me people.)