Yesterday, my sixteen year-old daughter announced that she was giving up carbs.

“Because,” she said, “I’m too dependant on tortilla strips.”  That’s strips, not chips–as in the five pound bag of Tortilla Strips from Costco that she plows through every day and a half.

“I’m giving up all carbs–all bread, cereal, chips–for the next three weeks.  I’m doing it, Mom!”

I was impressed, and surprised.  Three weeks doesn’t sound like much to some people, but this is my girl who was born with a bag of white flour in one hand and a bag of white sugar in the other.  And now she was giving up both?

“Instead of quitting carbs altogether, why don’t you just cut back?”

“Because, if I cut back I won’t do it.  Cutting back isn’t tangible.  I have to cut them out completely so I know that I’m not eating them.”

I could see her logic, but wasn’t sure she understood the full implications of a tortilla-strip-free existence.  It could get dire. I decided to help her out.

“Yeah, we’ll make it a challenge.”

“Okay!  And if it’s a challenge, we’ll need a prize.  Let’s see, what should it be…” I could have mouthed along with her what came next.

“I know!  The loser has to pay for the winner to get a her nails done!”  Getting Nails Done is a big thing with Meg. (Expensive + Unnecessary = Awesome.)

We agreed that we wouldn’t go crazy and read labels to avoid anything with a few carbs or grams of sugar in it, but rather that Meg would avoid basic carb items like bread and chips (strips) and I would avoid table sugar and desserts.

“If we both win…”–the pause was short–”then Dad has to pay for us both to get our nails done–pedicures too!”  I called Derrick and told him about our pact and all he said was, “It doesn’t sound like a very good deal for me.”  (He forgot that nobody asked for his opinion.) And just like that, it was Game On.

We sailed through the next eight hours–no carbs! no sugar!–then sat down to a healthy dinner of grilled chicken and veggies to end Day One of the New Healthy Us.  After we finished, Meg asked if there was any more chicken left.

“Shoot, there’s not.  Did you not get enough to eat?  We could make more.” With her newfound discipline, I needed to be sure the little health nut was eating enough.  She waved her fork and shook her head.

“Ice cream?  What do you mean, you’re gonna have ice cream?”

“We have Mudslide in the freezer.”  She shrugged and looked at me quizzically.  What do you mean what do I mean?

“Are you kidding me?  Ice cream is full of carbs!”

“No it’s not, it’s full of sugar.  I never said I was giving up sugar–that’s what you’re giving up.  So I can have ice cream…but you can’t.”  She said this last part gently, but it was pure malice.  She knew that Tillamook Mudslide was my favorite flavor, among all ice cream flavors, of all time anywhere in the history of ever.  She knew that Tillamook Mudslide was the ice cream I craved and dreamt about and fought for.  And she also knew that, after our first warm and sunny Saturday in ages, nothing sounded better at the end of it than a big fat bowl of Tillamook Mudslide. Eating it was practically why sunsets were invented. 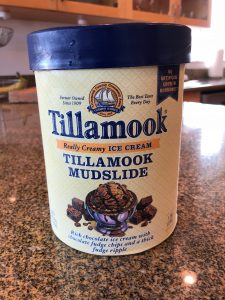 “Come on, Meg.  You know you can’t have ice cream if you’re quitting carbs—”

“Mom, I said I was giving up carbs like bread and chips–I didn’t say I was giving up everything that had any carbs in it.  We’re not reading labels, remember?  Just because ice cream might have some carbohydrates in it, doesn’t mean it’s a carb.  Everyone knows it’s a dairy.” I started to laugh but then realized she wasn’t.  She was dead serious. Which led me to two possible conclusions about my daughter:

a)  My daughter isn’t as bright as I thought she was, or

b)  My daughter is much brighter than I thought she was, as evidenced by this cunning and crafty scheme to eat chocolate ice cream on her rigid “no carb” diet.

My gut told me to go with b.

And so we finished Day One of No Carbs/No Sugar/The New Healthy Us with Megan eating a large bowl of Tillamook Mudslide and me eating a whole wheat pita while I watched her.  To be fair, I’d toasted my pita and sprinkled it with Splenda and Cinnamon, hoping to feed my sugar craving with a tricked-out version of “cinnamon toast.” Megan looked down at my pita and sighed.

“You’re so lucky, you get to eat bread…(sigh)…I miss carbs.”  She looked longingly out into the night sky–as if a carb was there dancing among the stars–and then dipped her spoon deep into her bowl, pulling up a massive scoop of ice cream and turning it over to eat upside down, slowly and thoughtfully. 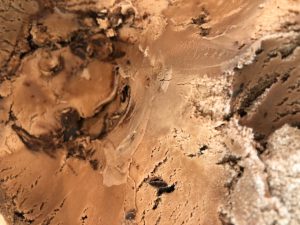 I gnawed on my Splenda-soaked pita. It didn’t taste like cinnamon toast.  (In fact, it didn’t taste at all.) Megan finished her ice cream and gave me a hug before she went to bed. I did it Mom! A disciplined day with no carbs.  What a champ.

We woke up this morning and went to church.  About halfway through the meeting Megan leaned over and whispered, “I have a chocolate bar in my purse.”

“You do?’  This was pure malice.  Megan knows that at no time do I crave chocolate like I do during the three long hours of church.  My lips quivered a little and my voice came out small. “Are you gonna eat it?”